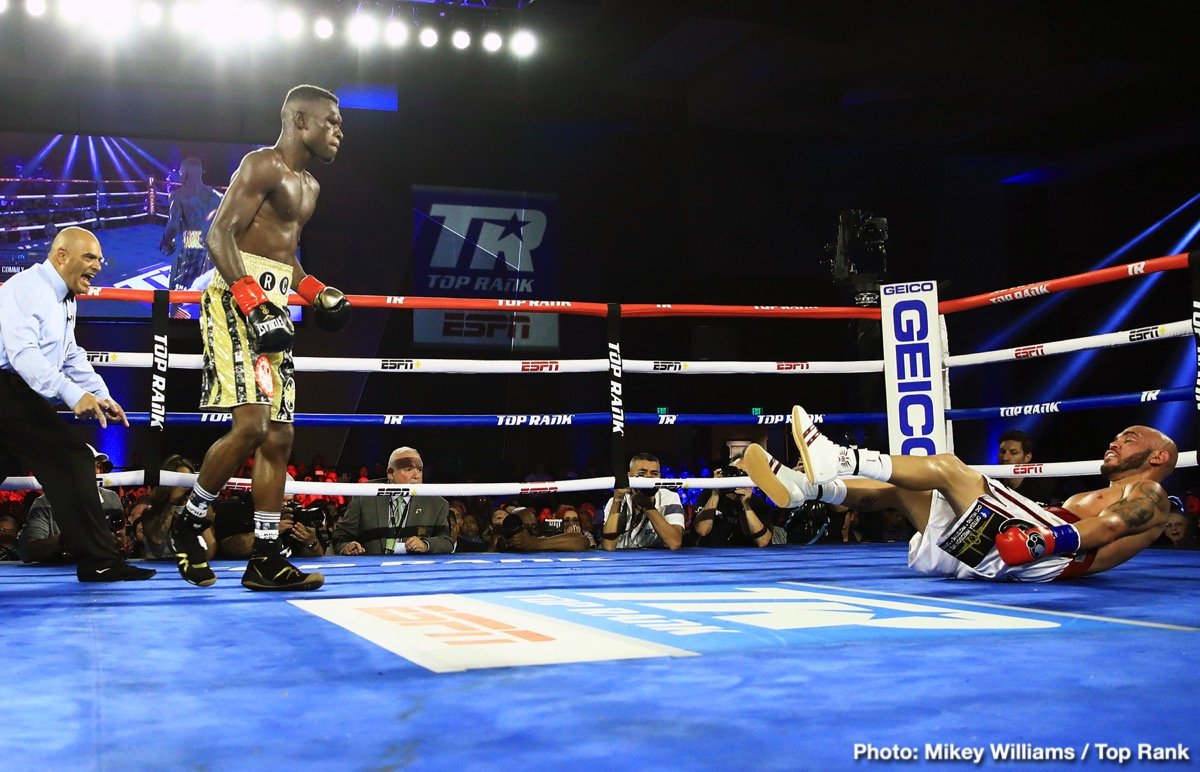 IBF lightweight belt holder Richard Commey (29-2, 26 KOs) got off to a strong start in knocking Raymundo Beltran (36-9-1, 22 KOs) down twice in round one, and he went on to stop the 38-year-old in the eighth round on Friday night on Top Rank Boxing on ESPN at the Pechanga Resort Casino, Temecula, California.

Commey, 32, dropped Beltran once in round 5, and a final time in round 8. Referee Edward Hernandez Sr. stopped the right in round eight after Beltran was knocked down again. The official time of the stoppage was at 0:54 of round 8. Beltran had no quit in him in popping up each time he was knocked down. Of course, it helped in that Commey proved to be inept at finishing Beltran.

With Commey’s wide shots, he was leaving himself wide open for Beltran’s left hook, which bailed him out on a number of occasions during the fight when he was hurt and close to being stopped. The other reason it took Commey so long to finish Beltran is the way that he would start boxing him when he had him hurt. It almost looked like Commey was purposefully carrying Beltran for as long a he could to give the boxing fans at ringside a good shot. Only Commey knows why he didn’t put his foot down on the accelerator to finish Beltran until the eighth.

“Beltran showed why he was a champion. He’s a great fighter who showed it against me tonight,” Commey said. “I was happy to get the job done and defend my title for the first time. It looks like Teofimo Lopez is next, but he has a job to do first.”

Commey will be fighting Teofimo Lopez or Masayoshi Nakatani next. Those two are fighting each other in an International Boxing Federation lightweight title eliminator on July 19. Top Rank, the promoters for Commey and Lopez, have big plans on putting those two in with each other next, as long as Lopez wins his fight against Nakatani.

Highly ranked unbeaten junior middleweight contender Carlos Adames (18-0, 14 KOs) successfully defended his NABF and NABO 154 pound title with a lopsided 10 round unanimous decision in over Patrick Day (17-3-1, 6 KOs). he scores were 97-93, 97-93, and 98-91. For a one-sided mismatch, it was a good fight. Obvivously, it would have been a lot more entertaining if Top Rank had matched Adames against a live body like Erislandy Lara, Jarrett Hurd, Israil Madrimov or Sergio Garcia. Those fights aren’t going to happy any time soon if ever.

Top Rank is slowly building the talented 25-year-old Adames. They’re going to wait a while before they match him tough. We might have to wait until Adames fights for a world title before he faces his first good opponent.