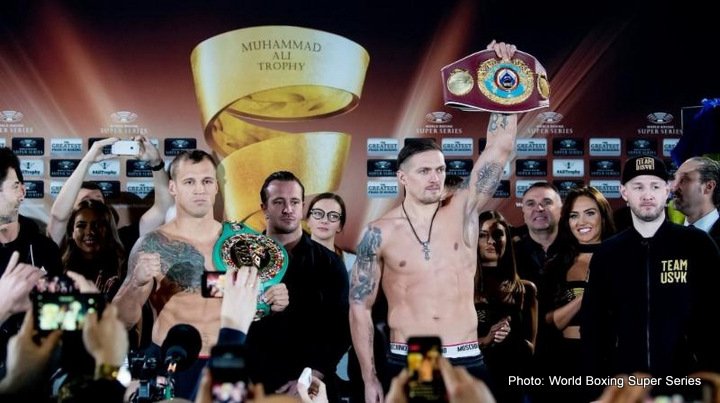 “I am going to entertain the crowd at the Arena Riga,” Usyk said. “That I can promise! I have worked on some new thing and Saturday you will see what I’m talking about.”

Briedis (23-0, 18 KOs), the World Boxing Council (WBC) Cruiserweight World Champion, will be fighting in his hometown in front of an expected crowd of 10,000.

“My team is doing everything to take pressure off my shoulders,” Briedis commented. “We are just concentrating on the fight. My dream is to deliver a fight that can go into the Boxing Hall of Fame.”

The Usyk-Briedis world title unification winner will advance to the WBSS championship final in May to fight the winner of the other WBSS semifinals match, Feb. 3 in Russia, between IBF World Champion Murat “Iron” Gassiev (25-0, 18 KOs) and WBA World Champion Yunier “The KO Doctor” Dorticos (21-0, 20 KOs).

Five exciting fights on the “Usyk vs. Briedis” card, promoted by Sauerland Event, will air in Canada exclusively on Super Channel.

10.000 fans are expected at the Arena Riga for the biggest unification fight in many years in the cruiserweight division; a semi-final in the World Boxing Super Series with a final in May in Jeddah, Saudi-Arabia and the Muhammad Ali Trophy at stake.

But hometown hero Briedis insists he doesn’t feel any pressure.

Said Comosa’s Chief Boxing Officer, Kalle Sauerland: “We are delighted to be in Riga. We have an absolute cracker. We have a fight between two world champions, two of the very, very best. We have a great arena and a country which seems captured by boxing and the fact that Muhammad Ali Trophy is coming to Latvia. We have a big showdown, Saturday night is all that boxing is about. Legacy is at stake.”