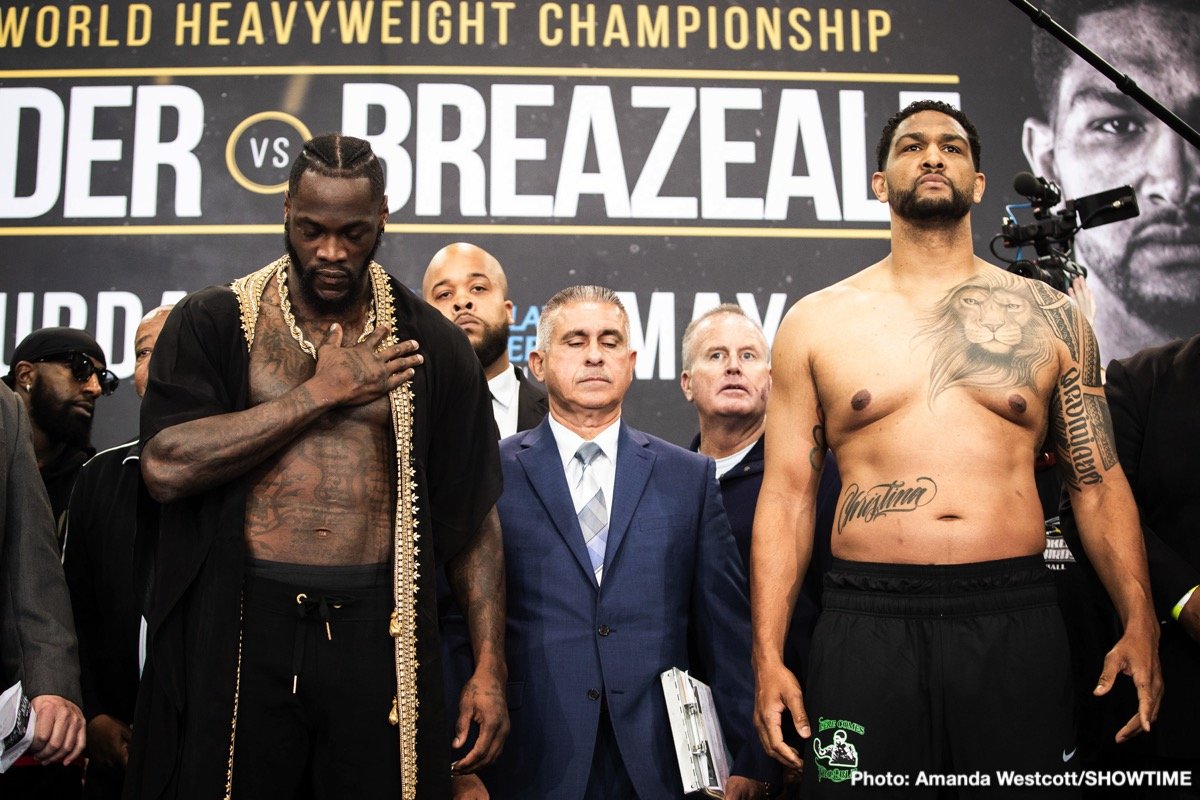 ALL ACCESS DAILY delivers the same intimate access and signature storytelling as the network’s Emmy Award-winning ALL ACCESS series. Part 1 of ALL ACCESS DAILY: WILDER vs. BREAZEALE catches up with Wilder and Breazeale as they kick off fight week with Wilder visiting and inspiring local elementary school children and Breazeale taking in the sites and sounds of the city where he will be fighting for the third time. Part 2 takes an inside look at Wilder’s clothing line launch, a visit to ESPN’s “First Take” show and his memorable New York Stock Exchange Closing Bell visit. Meanwhile, Breazeale meets with the New York City media at Gleason’s Gym in Brooklyn for his final fight-week workout.

WBC Heavyweight World Champion Deontay Wilder rang The Closing Bell at the New York Stock Exchange on Wednesday just three days before he defends his title against mandatory challenger Dominic Breazeale this Saturday on SHOWTIME from Barclays Center in Brooklyn.

Wilder’s debut on Wall Street was as resounding as his performances in the ring. The American champion with a 95 percent knockout ratio broke the gavel during Wednesday’s ceremony to signal the end of the trading session on the NYSE. After a supportive cheer from traders on the floor, Wilder was assured that breaking the wooden gavel is considered a sign of good luck.

“This was a great experience ringing The Closing Bell and bringing the gavel down to close The New York Stock Exchange,” Wilder said. “It’s not every day you get to do that. It’s not every day that someone breaks the gavel at The Closing Bell. But I’m the heavyweight champion of the world and when I hit something it breaks. So that gavel was just like my opponents. Once I hit them right, they break and they’re never the same.”

In the main event of Saturday’s SHOWTIME CHAMPIONSHIP BOXING® tripleheader, Wilder will make the ninth defense of his title in a matchup of 6-foot-7 heavyweights with a combined 90 percent knockout ratio. America’s only heavyweight champion, Wilder seeks to join elite company alongside Hall of Famers Joe Louis, Muhammad Ali, Mike Tyson and more as just the 10th fighter in history to make nine or more consecutive successful heavyweight title defenses.

Tickets for this BombZquad event can be purchased at ticketmaster.com and barclayscenter.com. Tickets also can be purchased at the American Express Box Office at Barclays Center. Group discounts are available by calling 844-BKLYN-GP. The Heraldez vs. Mendez fight is co-promoted with Mayweather Promotions.