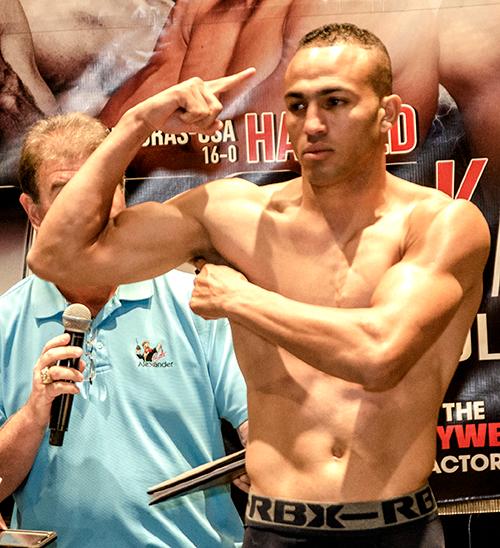 Last night at The Hard Rock in Hollywood, Florida, unbeaten welterweight hope Livan Navarro of Cuba scored possibly the biggest win of his pro career so far as he pounded out an entertaining yet largely one-sided decision victory over Colombian puncher and one-time dangerman Breidis Prescott – The 28 year old from Havana hit a game but faded Prescott with plenty of shots, to both head and body, and he won by wide scores of 80-72, 79-73 and 78-74.

Navarro, who is managed by Juan Jimenez, who of course looks after heavyweight contender Luis Ortiz, is certainly a young and talented fighter to keep a firm eye on. Aggressive, throwing plenty of punches each time he fights and a natural crowd pleaser, the man known as “Machine Gun Kid” could be featuring in some bigger fights before too long.

A pro since October of 2015, Navarro had three fights last year and will hopefully be kept active this year. Last night, soon sensing how Prescott’s speed had gone, Navarro saw no need in being anything like defensively cautious. Prescott let his hands go and tried his best in each of the eight rounds but his reflexes just aren’t there any longer. Indeed, it seems almost an eternity ago now when Prescott, then largely unknown, made a big, big name for himself by obliterating an unbeaten Amir Khan inside a single minute; this being back in 2008.

Navarro seems to have a bright future, whereas Prescott should seriously think long and hard about calling it a career and hanging up the gloves. A decade ago, Prescott was a genuine threat to the best lightweights in the world. Now he is a 147 pound journeyman.

Former WBC heavyweight champ Oliver McCall was supposed to have fought on last night’s card, against Elieser Castillo, but the fight did not happen. Considering the ages of the two men – 54 for McCall, 48 for Castillo – it’s perhaps for the best that the fight was pulled.