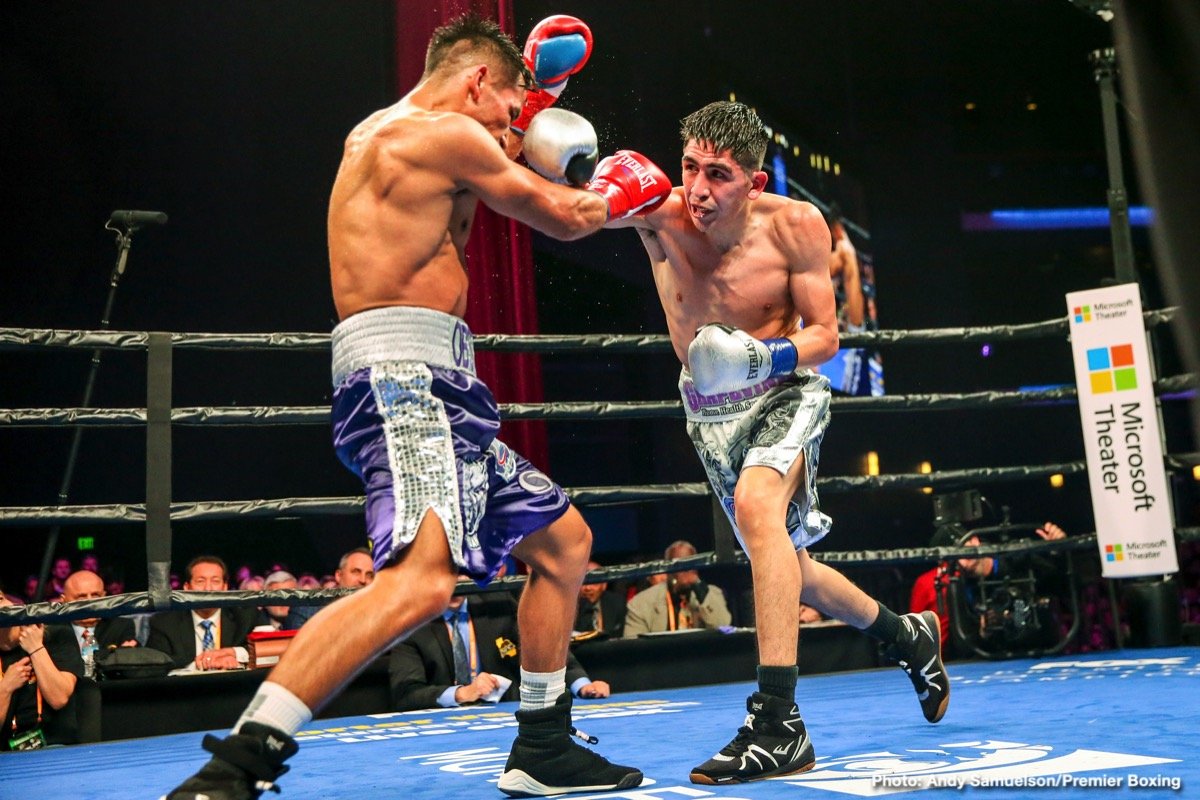 Leo Santa Cruz (36-1-1, 19 Kos) retained his WBA Super World featherweight title in beating substitute opponent Rafael Rivera (26-3-2, 17 KOs) by a 12 round unanimous decision on Saturday night in front of an enthusiastic crowd at the Microsoft Theater at L.A. Live in Los Angeles, California.

The fight was entertaining despite Rivera being world’s apart from the 30-year-old Santa Cruz in terms of talent. The only thing that Rivera could do tonight to make the fight compelling was has dogged determination to come forward the entire fight and not give up on himself.

“People will know me better now and it was a great experience,” said Rivera. “I want to continue to push towards another world title opportunity. I want to be a world champion, but it didn’t happen tonight. I will continue to fight and show everyone what I can do.”

The 24-year-old Rivera fought like a man possessed with the way he was attacking Santa Cruz in a relentless manner the entire fight. It didn’t matter how many punches Rivera was taking. He just kept coming forward and unloading on Saturday after getting hit.

Rivera was at his best early in the fight before Santa Cruz got his offensive machine cranked up. It took Santa Cruz a few rounds to start unloading on the 24-year-old Rivera. But once Santa Cruz did get warmed up, he let loose with the dogs of war in throwing 1,273 punches, his second highest of his career. It helped that Rivera had no punching power to speak of. This allowed Santa Cruz to hit him with everything but the kitchen sink. When Santa Cruz was throwing punches, Rivera was stymied and unable to try and get to him to land his own shots.

Rivera had a good round in the 9th in landing some nice shots. It wasn’t enough for Boxing 247 to give the round to Rivera, but he at least landed some good shots for a change, because Santa Cruz was throwing nonstop punches literally that made it all but impossible for Rivera to get his shots off.

It was a good fight for a horrible mismatch. It could have been far worse. You can’t expect much from a replacement opponent. Santa Cruz was supposed to defend his World Boxing Association title against Miguel Flores. He hurt his ankle in training camp, and had to pull put of the fight. Flores would have been about as bad an option as Rivera, but that’s a product of where Santa Cruz’s management are searching for his opponents.

In the co-feature bout on the card, former World Boxing Council lightweight champion Omar Figueroa Jr. (28-0-1, 19 KOs) defeated knockout artist John Molina Jr. (39-8, 24 KOs) by a 10 round unanimous decision in a very competitive fight. As good as this fight was, it should have been the main event, and this mismatch between Santa Cruz and Rivera in the co-feature bout.

The scores were 99-91, 98-92 and 97-93. The judges did Molina Jr. no justice with those wide scores, especially the 99-91 score. That one came from outer space. That score made little sense when looking at the competitive fight that took place inside the ring tonight. the judges didn’t give Molina Jr. any credit for the bang up job he did against the younger 29-year-old Figueroa Jr. tonight.

The fight was even going into the championship rounds in Boxing 247’s view. Figueroa took over with the fight with his work rate, and his hard shots. He had a little bit too much for the 36-yer-old Molina Jr. down the stretch. it was still very close at the end. Molina landed a lot of nice shots that Figueroa was to take. The judges had to decide which of the two fighters to give the rounds to based on almost an equal amount of heavy shots that landed. It was a great fight to watch. Figueroa Jr. fought extremely well for a guy that had been out of the ring for 2 years since 2017. Molina also fought an excellent fight for a guy coming off of more than a year layoff.

Figueroa Jr., if he can stay healthy and active, he’s going to be right in the thick of things in the light welterweight division. He just needs to get busy. Fighting once ever 2 years isn’t going to get the job done for Figueroa. He can do better than that. Let me rephrase that. Figueroa has GOT to do better than that if he wants to make something of what’s left of his career. If Figueroa has another 2 year layoff, then he might as well call it a day and do something else with his life. He can’t be having all these long layoffs if he wants to make a mark in the boxing world.