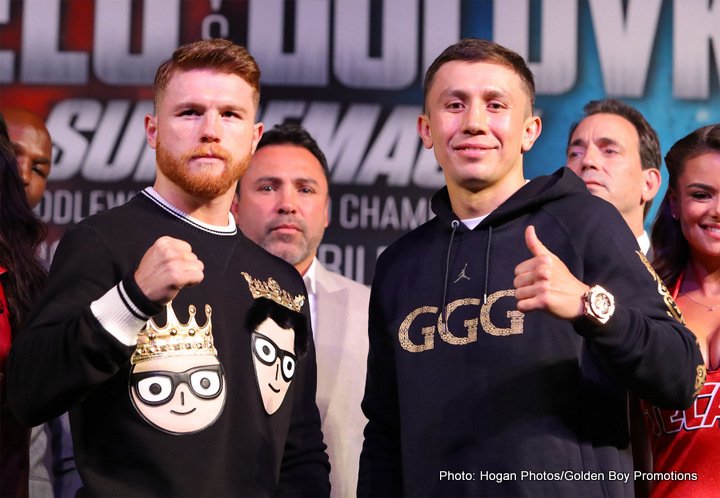 Vito W. (ESB): In the case of Canelo, the one wildcard for him is the fact that he’s the one going up in weight and taking the risk. He’s facing a feared puncher who enters the ring as the favorite based on that crushing power. It’s the punchers natural weight class. Everything about this bout points to a Golovkin victory. A loss for Canelo, coming on the heels of victories over men like Mosley, Chavez Jr., Cotto, Lara, and others would simply mean he loss to the better man in the ring that night. At his age, he’s still young enough to get himself back on the right track and land in a few more mega-fights and end his career as an eventual Hall of Famer.

Things are a bit different for Golovkin. GGG enters the ring with a little to ‘win’, but far more to lose! Critics of Golovkin point to the fact that of his 4 titles owned, only one came from a standing Champion. He defeated a #13 world ranked fighter (Nunez) to win an interim WBA strap. He defeated Lajuan Simmons (23-3-2, coming off a loss) for a vacant IBO title. He defeated #43 world ranked Marco Antonio Rubio for an interim WBC strap; and he defeated David Lemieux head to head for his IBF strap. When you own 4 titles and only faced one Champion (who was only ranked #5 worldwide) for that one title, it fuels questions relative to your true greatness.

You can’t be mentioned amongst the best in the sport, Pound for Pound, when you haven’t really defeated anyone on that ledger and opted not to go up in weight to face the few men that were. So, for Golovkin, a loss against a fighter coming up in weight that will fight a style that plays into his strengths would be utterly catastrophic. Golovkin can not lose this fight and maintain any true credibility, unless that loss comes by way of questionable decision. Canelo has the better overall skill level when you consider both offense and defense, so if he goes the distance, I think his odds of winning go up exponentially. But to answer your question, Golovkin has far more to lose from a legacy standpoint. A decision won’t be so bad. If he gets stopped, the words “exposed” and “hype” will flood the news circuit well after he retires from the sport!

Jeffrey H. (Atlanta, GA): Has Adrien Broner lost his mind? This dude is on a quick road to one of two places. Jail, or another one that I don’t want to wish on him. What are your thoughts about his latest brush with the law?

(Vito W.): Honestly, it’s one of the most troubling things I’ve seen an athlete encounter. What’s worse is that no one in his inner circle seems to have the ability to shake him up. When I look at how quickly he lost steam, going from a threat in the ring to a threat to no one but himself, it reminds me of how difficult it is to be “celebrity status” and still somehow live a normal and sane life. How do you ask a 28 year old that’s “about that life” to “grow up”? Being part of his circle, one would say the odds “turning things around” probably aren’t the greatest, and I think it’s tragic.

Broner is a talent that I totally blew the call on. I once thought and publicly stated that he would be “one of the best to do it in this era”. Right now, that sentence is laughable. But I would never take it back. Based on talent, he could have been. But something just didn’t click mentally. You can’t predict that. Perfect example: As great as Duran was, NO ONE could have predicted a “No Mas” moment. You just don’t see these moments coming! But similar to a Zab Judah and Devon Alexander, among others, the mental element in Broner seems light years behind the physical element. Each of them were incredibly gifted, physically. Alexander didn’t have the character issues the other two did, so his struggles and inability to reach his true potential was halted only in the ring. Beyond that, he’s solid.

With Judah and Broner in particular, both had all the skill and physical gifts known to man, as boxers. What they lacked, and the only thing that prevented them from being a “Mayweather” is the 3-D’s. Discipline, Defense, and Determination! Those three D’s require precision in “HD”, in a world that constantly ask “what have you done for me lately”? My silent prayer is that both men find a better situation in life. A good mentor who has the ability to both relate to them, and shake them up would be the best thing that could happen to them. Broner said he basically has no one to talk to. If he’s reading, my number is published and always on! Use it, Champ! This goes beyond boxing. I’m talking life and love (for ones self). Time to rise or fall! One Love!

Hector V. (San Antonio, TX): I wanted to take you to task about your comments on Facebook for Roman “Chocolatito” Gonzalez. Most would agree that he was the best low-weight fighter in the history of the sport, but you felt a need to say he’s a “hype job”. How in the hell can you say that with a straight face?

Vito W. (ESB): I love the raw emotions, Hector! Unfortunately for you, they don’t change fiction into fact. If you look at the post that I made prior to the fight, I said “Bring on Chocolatito”, because just like you, I love to see the little slugger do what he does best! I also said in parenthesis after that statement (“Even thought I know he’s going to lose”). How was I able to make that assessment? Because this one opponent required something he doesn’t have to offer (defense). Many fans get so wrapped up into exciting styles that they don’t realize, there’s levels to this! You can’t learn defense in one fight camp. So what’s that mean? If a fighter’s only calling card is his explosive offense, there are no new gears to hit when you face an opponent who has the chin to out grit you, the ethic to outwork you, and the punch to severely hurt you!

SSR proved to us in the first fight that he could hit Gonzalez at will and hurt him. There was NOTHING Roman could master in one fight camp to change that. Does the fact that he faced someone who had his number make him a “hype job”? NO! The term “hype job” was more an indictment on his promoter and HBO than it was on Roman Gonzalez. Their verbal push in the media to crown as him the sports “#1 P4P fighter” is what I vehemently protest. The term “P4P” was coined for the ONE FIGHTER with beyond great overall skills that transcends height, reach, weight, etc. In other words, if you took this mans talent and put it in the body of a fighter in any weight class, he’d be able to yield parallel results.

At the highest level in any weight class, too many punches equals a short night (or two, at some point); and inevitably a short career. There’s a reason the best of the best have long term success over sustained careers. They can give you their best (shot) without taking too many of yours. Had Gonzalez been a more balanced fighter, he wouldn’t have taken those shots; and in essence, would not have loss the way he did. So, while I can appreciate his exciting style that puts cheeks-in-seats, no, I can’t support the claim that he’s the best in the business. Not when guys like Andre Ward have gone up in weight and defeated men with the very same style that the same network placed ahead of him on that mythical P4P list.

Going up 4 weight classes means very little to me when that accomplishment only spans 10lbs! At the lower weights, the divisions are only 3-4lbs apart. Consider this: Andre Ward’s 3 weight class jumps would equal a 6 weight class jump for a fighter Gonzalez’s size, and they don’t punch nearly as hard! Manny Pacquiao went from 112lbs to 154lbs, but taking too many shots slowed him down later in his career. Mayweather went undefeated from 126lbs to 154lbs and looked fresh every step of the way. How? By allowing less than 25% (punches) to land. Andre Ward went from 160lbs to 175lbs without losing or allowing more than 25% punches landed against him. This is where balance trumps a great offense alone. That’s P4P worthy! Gonzalez is an amazing offensive fighter! He was never the BEST OVERALL in the sport! Period.

(Vivek “Vito” Wallace can be reached at 754.307.7747 or Wallace@eastsideboxing.com. Find his work here every week on boxing247.com, or follow daily fight threads on Facebook).