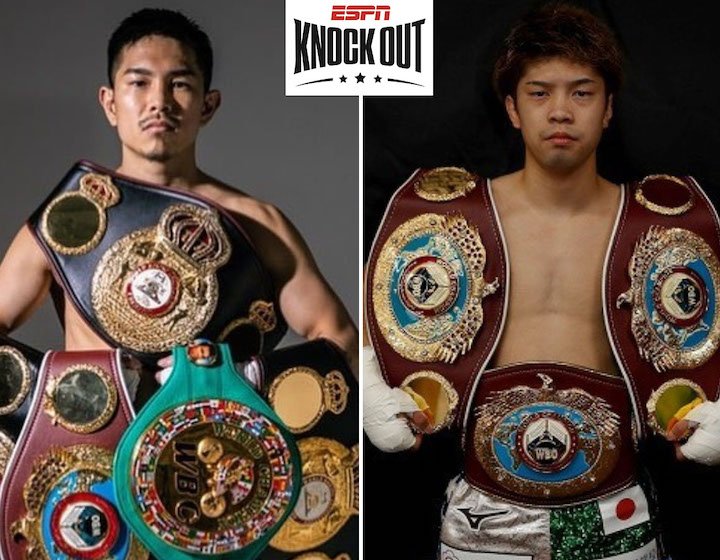 Now the two will fight each other at the same venue – Ota City General Gymnasium, Tokyo. It’s always a big deal, a big event, when Japan hosts a big fight on New Year’s Eve. This fight has fireworks written all over it. 31 year old Ioka, 25-2(14) – and never stopped – has ruled at minimumweight, light-flyweight, flyweight and super-flyweight. Beaten only by Amnat Ruenroeng (SD) and, on New Year’s Eve in 2018, Donnie Nietes (another split decision), Ioka is one of the best fighters in the world.

Tanaka, still only 25 and 15-0(9), has made amazing progress in the seven years he has been a pro; capturing titles at minimumweight, light-flyweight, flyweight. An all-action warrior who has already given us at least two classics (see his battles with Sho Kimura and Ryoichi Taguchi), Tanaka should be a far bigger star than he currently is. Tanaka loves to fight, he throws a hell of a lot of leather in every fight he has, and he always send his fans home happy.

But who will win on December 31? This fight is a genuine pick ’em affair. Neither guy is a monster puncher, yet both hit hard enough. Both men have a good chin, seemingly limitless stamina and a fierce desire to win. A 12 round classic might just await us. As such, we’d better leave it until January 1st, 2021 before handing out those Fight of The Year awards!

Let’s home a platform in the US (and for this writer, the UK) picks up this guaranteed slugfest. If Tanaka can get the victory, he will have won world titles at four weights quicker than any other boxer in history, with just 16 bouts. As for Ioka, his win over Aston Palicte, where he claimed the WBO super-fly title, saw him become the first-ever Japanese fighter to win world titles at four weights.