“I want to acknowledge a person that is doing a tremendous job in bringing boxing back to the masses, that is Stephen Espinoza, SHOWTIME is bringing you the best fights and the best fighters.

“These are the KNOCKOUT KINGS for a reason, you have explosive fighters from top to bottom, fighters who understand what hard work is all about, fighters who go out there and fight for the fans, for the public and for the recognition of being called a “KNOCKOUT KING”.

“We are looking forward to bring the big names in the sport of boxing. Why? “Because San Antonio knows these big names.

“These Argentinian fighters like Lucas Matthysse, Sergio Martinez and Marcos Maidana are the kind of fighters that can pack a punch, they throw punches with tremendous power.

“Diego Chaves is a champion for a reason and he’s fighting, in my eyes, one of the best top three in the welterweight division, Keith “One Time” Thurman. It’s going to be an amazing fight.

“Figueroa has been blowing everybody out of the water with his work ethic, with relentlessness up and down the ring. He’s the kind of fighter that knows what he wants and knows what to do to get it.

“In this main event you have two warriors, two fighters that put everything on the line, their heart on the line.

“There’s really not much to say, these guys had said it all.

“I’m in tremendous shape, I’m focused. I’m going to put on a hell of a performance.

“I am in great shape and I have everything to bring to the table. I have the speed, I have the power. I have the explosiveness and I’m going out there and do what I know how to do.

“I’ve known Virgil (Hunter) since I was 13 so it’s not like he’s a stranger to me. Everything’s been flowing pretty well and it’s been a great situation for me.

“It’s going to be a hell of a fight; I’m in shape. I’m in good spirits. I’m focused and I know Soto Karass is ready too.” 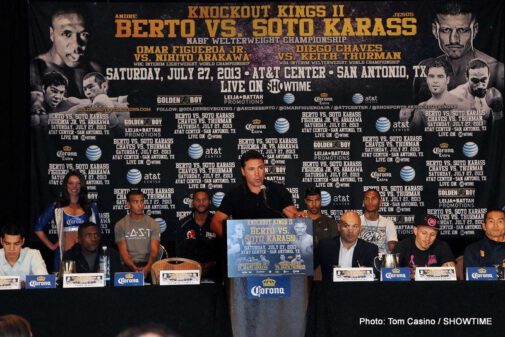 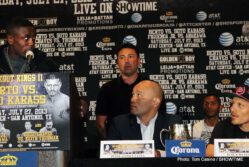 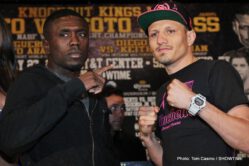 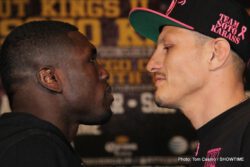 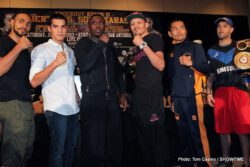 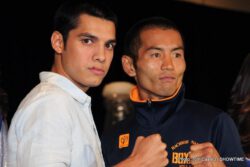 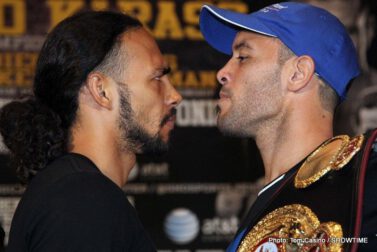 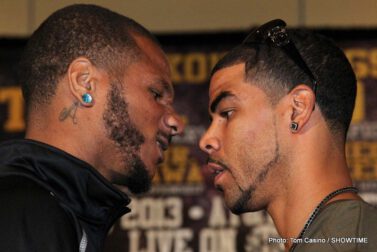 “My preparation has been great. My team knows what Berto brings. He’s an ex-champion. We know that he’s a quality fighter and he’s tough. But that’s why we train for this.

“The losses you see on my record, I wasn’t taking it serious. But, believe me, we’re taking Andre Berto very serious. Not only have I matured personally but I’ve matured in the ring. The preparation has been very good. We know we have a tough opponent, but we’re here and we’re prepared to win.

“Every fight I come with a different plan. We have a plan for Andre Berto. We have a Plan A, a Plan B, it doesn’t matter; we’ll be ready for him.

“My only prediction is it’s going to be a war. I’m going to leave my heart in there. If I have to die in the ring I will.

“Out of the ring we’re friends, but inside the ring it’s another thing. I don’t have anything against Andre Berto but once we get in the ring I’m looking to knock him out.

“I want everyone to help, help me with breast cancer awareness. We have a raffle going on – it’s $10 to buy a ticket and you can win the gloves and the trunks that I wear in the ring. Let’s go knockout cancer as well.

“The reason I support Susan G. Komen is because of Oscar De La Hoya. It really touched my heart that Oscar lost his mother, Cecilia, to cancer. So being a boxer I felt like I would join that fight to knock out breast cancer.

“I’m ready; I’m only a pound-and-a-half away. I can’t wait until tomorrow so I can get on the scale and go eat.”

“This is a great opportunity, this is what we have been working so hard for.

“I want to thank my opponent’s team for having agreed to this fight, he’s ranked number one and that’s what we wanted.

“We don’t take anybody lightly. We are ready, we know that a fight can take many directions with every step you take in the ring, so we are ready.

“I’m fighting with great knockout artist such as Keith Thurman, Berto, Chaves and Arakawa and all these are great fighters

“We are the backbone [of boxing] because we fight to knock someone out, we try to provide the fans with the most excitement we can and we go in there ready for war.”

“I’m happy to have this chance at my first world title. That gives me extra motivation to win this fight.

“I don’t think I can win by points. I have to knock him out – I think that’s my only chance to walk out of here with a world title.

“We know we have a tough opponent, we have very similar records, neither of us can lose concentration during the fight because it can end with only one punch that’s why we are very well prepared and we know we can take the win.

“I know Keith is a good fighter, but I hope he’s ready because I’m going to show him and the world why I’m a world champion and why this belt is coming back with me to Argentina.

“He may be undefeated, but he’s never faced anyone like me.

“I’ve been training hard, very hard. We are looking forward to a great fight, and we are confident the we’ll come out victorious.

“It’s going to be a war. I’m not going to leave my belt in the judges’ hands- I plan on taking care of Thurman on my own.”

“But I’m the kind of fighter that’s knocking on everybody’s door. Everybody in the welterweight division will soon know about Keith “One Time” Thurman. We’re moving up one step at a time and we’re going to step over Diego on Saturday night, guaranteed.

“The KO bonus has nothing to do with the way I fight. My motto is already KOs for life and the nickname “One Time.” I do my best to get the fighter out of there because if we don’t have to do the distance then that, to me, is a job well done.

“I definitely don’t think he’s faced anyone like me. That’s why I’m confident. I believe he’s been spoon-fed his entire career. A lot of people say the fighters I’ve fought knew I was favored, but they were still world-class fighters and I dominated them each and every round. And I plan on dominating Diego Chaves every round Saturday night.

“Knockout Kings II – this event has that title for a reason. I guarantee you’ll get your moneys’ worth.”

“I battled cancer and it didn’t hold me down. I’m still here and I’m ready.

“Coming up this Saturday, I’ll win with by knockout. ”

“It doesn’t matter what happened when I fought his brother. The fact that I lost to Andre just gives me extra motivation. When I fought Andre, I wasn’t in shape at all. But I’m in some of the best shape of my career to fight Anthony. I had a great camp and I’m ready to give him the first loss of his career.”

“I want to thank the Susan G. Komen Beast Cancer Foundation – you are important in every one of our lives because we all have moms. But that’s not to say that men can’t get breast cancer as well.

“I want to thank Golden Boy Promotions for giving us the opportunity to put on the type of fights that we’ve been bringing to San Antonio.

“I also want to thank SHOWTIME. I won my first world title on SHOWTIME and fought several times on the network, so it’s not just a thing for me to say that I’m proud to be them. It means a lot more than just face value; it’s what in my heart because they’ve been with me for several years.

“We’re still recovering from the Canelo-Trout fight and now we’re bringing Knockout Kings II where we have three world title fights and I don’t know who is going to win. Will the fights go the distance? Probably not when you have these types of punchers. Who’s going to win the fights? I have no idea. Am I going to be in the front row? You bet.

“I’ve watched these guys on TV and I’m awed by the type of power that they have. Omar – I call him ‘Mini Mike Tyson’ – I hope he gives us two rounds so we can really appreciate the power that he has.”

“I want to thank Oscar De La Hoya, SHOWTIME and James, my partner, for putting this all together. It’s been a building process, but we’re building, we’re getting there and we’re excited.

“I would like to thank Jesus Soto Karass for helping raise money for breast cancer awareness. Please ask the public to give $10 to the Susan G. Komen Breast Cancer Foundation. We’re excited to help out and hope that we can raise money for this great charity.”

“I just want thank everybody who came here today, the fans and those who has spread the word around town. I want to say thank you to Mike and Jesse for making my life easier and making my life happier by bringing all these big fights to San Antonio.”