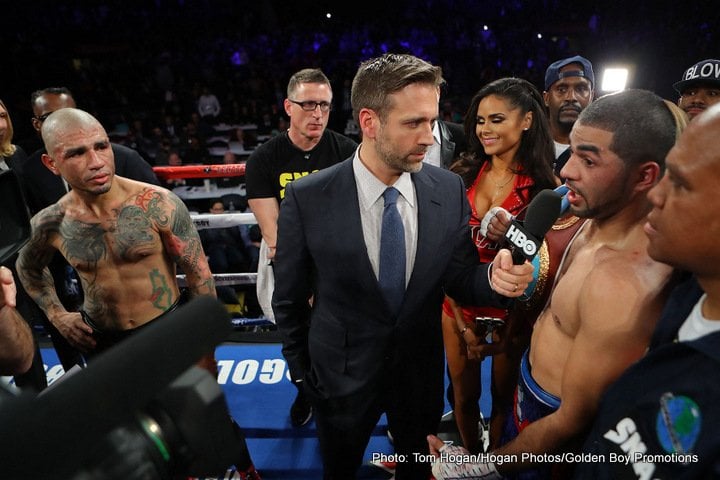 Miguel Cotto (41-6, 33 KOs) came up short last Saturday night in losing to the younger 29-year-old Sadam Ali (26-1, 14 KOs) by a 12 round unanimous decision in their fight on HBO World Championship Boxing at Madison Square Garden in New York.

After the fight, HBO commentator Max Kellerman took the opportunity to give Cotto credit for having an excellent career, calling him a “prize fighter” and noting that he’s heading to the boxing Hall of Fame one day in the near future.

“Miguel Cotto will be in the Hall of Fame one day after all,” said HBO’s Max Kellerman last Saturday night. “He beat Shane Mosley when Shane Mosley was still in his prime more or less, and won belts in 4 weight divisions. Most recently, he knocked out Sergio Martinez, who was at the end of his career, but was still a star fighter,” said Kellerman.

In fairness to Mosley, he was not in the prime of his career when he lost to Cotto by a narrow 12 round unanimous decision on November 10, 2007. Cotto edged the fight by the scores 115-113, 116-113 and 115-113. Before that fight, Mosley had lost twice to Vernon Forest and twice to Winky Wright. Mosley was no longer in the prime of his career when he fought Cotto. Mosley’s career was sinking. The prime of Mosley’s career was from 1997 to 2001. For Kellerman to say that Cotto beat a prime Mosley in 2007, it doesn’t reflect the reality. Mosley was NOT in his prime when he barely lost to Cotto. Mosley was a fighter that had a lot of mileage on him, and who had recently been beaten 4 times at the time he fought Cotto.

Cotto’s win over Sergio Martinez came when the Argentinian fighter was at the end of his career. Martinez was 40-years-old, and had a bum knee from his fight with Julio Cesar Chavez Jr. in 2012. Martinez had 2 surgeries on his right knee prior to fighting Cotto, and he’d been out of the ring for 14 months without fighting. Kellerman mentioning Sergio Martinez as one of Cotto’s great wins is sad, because it wasn’t a great win. A prime Sergio Martinez would have been a disaster for Cotto, and I think that’s a given. Cotto beat an over-the-hill Martinez, and that’s the only thing you can say. Cotto picked Martinez to fight for a middleweight title, and ignored Gennady Golovkin.

“Miguel Cotto was a star his entire career, and when you’re a star, when you bring a following to the table, the question is do you use that to avoid competition or are you a real prize fighter?” said Kellerman. “You line up the biggest prize and I’ll fight that guy. Miguel Cotto was a prize fighter, because he had the following he did, he made the biggest fights. Now, he frequently lost them. Was he the greatest fighter of his era? Was he the pound-for-pound No.1 at any time? No. He lost to Floyd Mayweather, Manny Pacquiao and Canelo Alvarez. What was the best win of Canelo Alvarez’s career so far? Miguel Cotto, and how about Manny Pacquiao? Probably Miguel Cotto. And certainly Miguel Cotto was one of Floyd’s best wins, and they were all tough fights. When you fight everyone, you lose. And if you’re not one of the 2 or 3 pound-for-pound fighters in the world, you might lose a bunch of them. No one ever came from a Miguel Cotto fight disappointed. Cotto always gave the fans their money’s worth. And by the way, sometimes he won the big one. I mentioned Shane, the Margarito rematch, the Mosley fight. He’s going to be in the Hall of Fame one day, and it’s been a pleasure to have covered his career,” said Kellerman.

Cotto was certainly a good fighter, but his best wins were against faded guys with injuries in most cases. Look at the wins and judge for yourself:

– Antonio Margarito – coming back from an eye injury