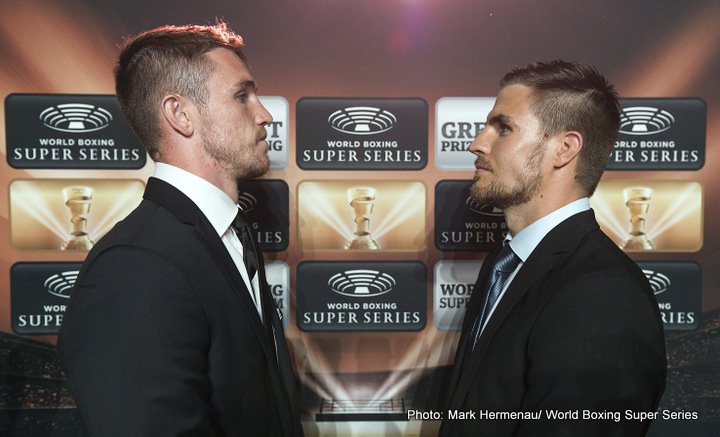 On the day that tickets for the opening World Boxing Super Series Super-Middleweight quarter-final between Callum Smith (22-0, 17 KOs) and Erik Skoglund (26-0, 12 KOs) go on sale, the Liverpool fighter spoke of how long-term ambition has brought him to the edge of greatness.

“I am really happy to be headlining at the Echo Arena,” said Smith. “When I turned professional, and even when I was a kid, the plan was to go as far as I could and to hopefully one-day headline shows. Especially in my home city and I have been lucky enough to do that before in my career but this time, opening the Super-Middleweight part of the World Boxing Super Series, it is an honour and I am really looking forward to it.”

Smith, who is undefeated in his twenty-two professional contests, selected Skoglund as his quarter-final opponent during the live Draft Gala on July 8th at the Grimaldi Forum in Monaco.

After hearing that the prestigious WBC Diamond Belt will be on the line, a belt never previously owned by a Super-Middleweight, Smith knew this fight against unbeaten Swede Erik Skoglund was the biggest of his career. “The minute I heard the WBC Diamond belt was on the line it gave me that added incentive. I treat every fight as a must win, but it is a bit better when there’s something on the line. WBC Diamond Champion would be a great achievement and it is a belt that I would be very proud to own.”

“We did a bit of research on Skoglund when we heard he was in the competition obviously before we picked him,” said Smith of his opponent. “But since the Draft in Monaco we have had a closer look. He is a good fighter, big for the weight and fought some decent names at Light-Heavyweight. He is coming down in weight so will think he has got the size advantage, he may have had that with the other six Super-Middleweights, but he loses that the second he steps in the ring with me.”

“He is a good all-round fighter who does the basics well, he fights when he has to and boxes when he has to. But I believe that the stuff that he is good at, I am better, I think I will be a little bit too good for him on the night. I picked him so I need to prove that that was the right decision by doing my job and beating him.”

Smith, who is undefeated in his twenty-two professional contests, selected Skoglund as his quarter-final opponent during the live Draft Gala on July 8th at the Grimaldi Forum in Monaco, and as one of the four seeded super middleweights he will enjoy home advantage for his first tournament test.

‘’A ring is a ring no matter where it is, but of course, I’m happy to be fighting in Liverpool,’’ said Smith. ‘’This is my home and this is where all my best performances as a professional have been. I like fighting in Liverpool, and with the crowd behind me, I will have an added advantage on September 16th.

‘’There are no easy fights in this tournament. It’s the best fighting the best, but I believe I made the right decision in Monte Carlo. That’s not to say Skoglund is not a good fighter. I think he is a very good fighter. His record speaks for itself, but I think stylistically, he was the right choice for me.

‘’It will be a tough test. On paper, Skoglund is probably the best fighter I’ve ever faced, and I will need to be at my best to beat him. But every time I’ve been up against it in my career and every time there’s been that fear factor, it’s brought out the best in me and I’m hoping for the same on September 16th.’’

Skoglund, who is unbeaten in his twenty-four paid fights and ranked with all major governing bodies at 175lbs before moving down in weight, is relishing the opportunity to go toe-to-toe with one of the division’s top talents, and believes the winner of this fight can go on to lift the coveted Muhammad Ali Trophy.

‘’This is a huge opportunity for me to prove myself at the highest level,’’ said Skoglund. ‘’Callum Smith is a top-level fighter and one of the tournament favourites. This is what the World Boxing Super Series is all about – the best fighting the best! That’s why I entered and that’s why I’m really looking forward to this fight.

‘’For me, it’s no problem fighting in Liverpool. Of course, I am always thankful for the opportunity to fight in front of my fans in Sweden, but I’m happy not having that pressure on my shoulders for this fight and I will enjoy being the underdog for once.’’

The WBC Diamond Championship will also be on the line for the winner of this quarter-final bout giving both men an added incentive. ‘’I’m in this sport to win as many titles as possible, and it will be great to add the WBC Diamond belt to my collection,’’ said Smith. ‘’It’s going to be an honour to fight for the WBC Diamond title,’’ said Skoglund. ”It gives me even more motivation to win!’’

Roberto Dalmiglio, Comosa´s Head of the Management Board, has expressed his delight at bringing the first World Boxing Super Series’ super middleweight quarter-final to Liverpool. ‘’We’re delighted to be bringing the World Boxing Super Series to Liverpool,’’ said Dalmiglio. ‘’We intend to set a new standard for boxing events and believe the Echo Arena will provide the perfect setting for a truly remarkable night of sporting action on September 16th.’’

Kalle Sauerland, Comosa´s Chief Boxing Officer, is excited to see the tournament get underway, and believes this quarter-final fight will showcase the quality of the super middleweight tournament. ‘’This fight, along with our other quarter-final match-ups, really reflects the strength and depth of our super middleweight line up,’’ said Sauerland. ‘’Callum Smith and Erik Skoglund are two young, hungry, undefeated fighters with a combined record of 48-0. This is going to be an explosive encounter!’’

Ticket details for the quarter-final clash between Smith and Skoglund on September 16th at the Echo Arena in Liverpool will be announced next week.

The World Boxing Super Series is delighted to confirm another unbeaten star for the inaugural season of the Muhammad Ali Trophy. Callum Smith (22-0, 17 KOs) has joined a star-studded tournament line-up that now features seven undefeated fighters, five world champions and three former world champions. As the WBC number 1, Smith will fight for the WBC Diamond Championship in his quarter-final match-up, with his opponent to be determined during the Draft Gala on Saturday night in Monaco. WBA Super Champion George Groves, former world champion Juergen Braehmer as well as undefeated challengers Erik Skoglund and Jamie Cox will also be competing in the super-middleweight competition. The remaining three spots will be announced before the weekend.

”I am thrilled to participate in the World Boxing Super Series, the Champions League of boxing,” Smith said. “What an honour it will be to fight for the WBC Diamond Championship in the quarter-final. But there is so much more at stake than just one belt – the Muhammad Ali Trophy as well as a potential domestic showdown with George Groves in the final. This tournament is very exciting for boxing and I am thrilled to be a part of it. I look forward to travelling to Monaco for the Draft Gala on Saturday and find out who my opponent will be.”

Read:  Floyd Mayweather Is Reportedly Interested In Taking Up De La Hoya's $100 Million Offer – If Oscar Has The Money

Roberto Dalmiglio, Comosa`s Head of Management Board, said that the tournament line-up was coming together nicely. “At cruiserweight, the World Boxing Super Series features four world champions, two former world champions and a KO King. At super middleweight, we now have two belts in the tournament, George Groves` WBA Super Title and the WBC Diamond Championship, which Callum Smith will fight for in his quarter-final match-up. In addition, there are two undefeated challengers. We have assembled a truly outstanding group of fighters who will now determine the undisputed number one in their respective division.”

Kalle Sauerland, Comosa´s Chief Boxing Officer, is pleased to give Smith, along with the other participants, the opportunity to shine. “Smith has been one of the hottest prospects in the UK for years and now he gets his chance to showcase his talents on the biggest stage of all,” Sauerland said. “The super-middleweight tournament will be exceptional and we will announce further high-profile names very soon.”

Said Smith`s promoter Eddie Hearn: “It’s been a very frustrating period for Callum but now we have clarity and something he can really get his teeth into. He is a technically excellent fighter with huge power who we believe has all the attributes to become a World champion – and stay there!”

Smith is on his way to Monaco for the hotly-anticipated Draft Gala on Saturday (23:00 local, 5 PM ET), which will be broadcasted in multiple territories and also be streamed live on www.WorldBoxingSuperSeries.com. During the live TV show, the top four seeds, which will be set by the Comosa Board once the line-up has been completed, will select their opponents from the unseeded boxers.