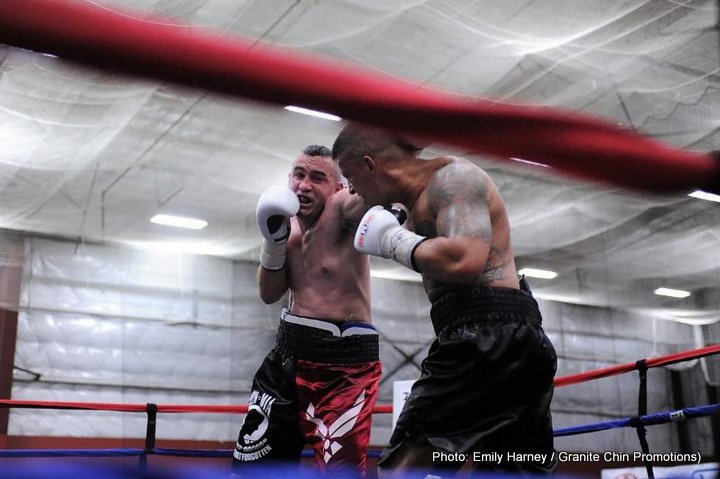 Chris Traietti is an extremely busy individual, who is involved in almost every facet of boxing. He is a promoter that co-owns Granite Chin Promotions, a matchmaker, co-owner of a boxing/fitness gym TKO Boxfit, and also a cruiserweight fighter (23-4, 19 KOs). He will serve as fighter, promoter, and matchmaker for “Fight Night at the Bay” on Saturday, August 5th at the Marina Bay SportsPlex in Quincy, Massachusetts.

“It is extremely difficult and stressful to do all three jobs, especially for one event, but I enjoy it. I start the day of the fight at ten in the morning, setting up chairs, tables, the ring, and making sure all the tickets and credentials are ready to go. I communicate with everyone that is involved with the event and make sure that everything is going according to plan, and if it is not, I have to fix it,” said Traietti. “The event usually does not get over until midnight, which makes for an extremely long, tiring day. Sometimes I am so busy with everything going on that I forget that I am fighting in the main event and when I finally get into the ring, I am completely exhausted.”

“Training is going really well for this bout and having my own gym is a major advantage when preparing for a fight, especially with my hectic schedule. I do not know a lot of about Lavin, other than he is a club fighter and someone that I am supposed to beat,” said Traietti. “I am really happy to be fighting in front of my loyal fans and I think they are going to be pleased with our upcoming fight card.”

Granite Chin Promotions has been a part of almost all of Traietti’s bouts, even fights that he has not participated in, since 2011 when he formed the company at the young age of twenty-four-years-old, along with his dad.

“I started Granite Chin six years ago, when I was just another opponent who had a 10-3 record and had lost three of my last six fights, two of which never should have happened. So, in order for me to obtain bouts, I had to promote myself,” said Traietti. “It has also allowed me to give local talent an opportunity to gain exposure while fighting on my boxing cards and parlay that into an important fight in the future. For example, Derek Silveira fought Danny O’ Connor at the TD Garden, Gabriel Deluca boxed on the undercard of Ward vs. Kovalev I, and Aleksandra Lopez fought for three world titles.”

Granite Chin has steadily grown their presence and popularity throughout the New England region over the years, but after their sales revenue plateaued over their last couple of shows, Traietti decided to shake up things up. So, he added Chuck Shearns to the company.

“In the short time that he has been involved with Granite Chin, Shearns has already provided significant contributions with his intense energy, great resources and connections, and unique perspective on different ways to promote our show,” said Traietti.

In addition to fighting, promoting, and matchmaking, Traietti became a co-owner of a gym TKO Boxfit last May with super featherweight contender Ryan Kielczweski (25-3, 7 KOs). The gym is located on 50 Finnell Drive in Weymouth, Massachusetts, and it is more of a fitness gym, as opposed to a boxing gym. They offer a variety of boxing and cardio/fitness classes, as well as private and group lessons.

Despite all the work the former Iraqi War Veteran, puts in outside of the ring, he still finds plenty of time to focus on his boxing career and perfect his craft, as he looks towards putting together another long winning streak. He wants to fight two more times before the end of the year, once in September or October, and then again in December. Traietti is looking for one more opportunity to have a television bout in a significant matchup, in order to see if he still has what it takes to prevail and move himself up the cruiserweight divisional rankings into bigger and better bouts.

An intriguing matchup to do just that, and one that he is extremely interested in making would be against local fighter Vinnie Carita (16-1, 15 KOs, unbeaten in his last thirteen bouts). Both fighters have good records and possess a lot of knockout power, which would lead to a great, exciting bout.

“I have reached out to Carita’s camp a number of times about making this fight, but I have not heard back from them. I think this would be a fantastic bout, because the winner could elevate themselves to a significant fight and fans will certainly enjoy it,” said Traietti.

Traietti had that potential career defining fight last September when he took on Mike Lee for the vacant USBA light heavyweight title on the CBS Sports Network. Going into that bout, he had scored eleven consecutive knockouts and for the first time in the last couple of years, he only had to focus on training, not promoting or matchmaking. Unfortunately, the bout did not go the way he wanted. He got knockdown in the second-round and was dominated, en route to a ten-round unanimous decision loss.

“I trained extremely hard for the bout against Lee, but I did not train smart. I could not adjust my fight game as the bout progressed, but he did, and that was the biggest difference in that fight. I did not really have a plan B once he adapted to my fighting style and from there on, he took over the fight,” said Traietti “It also did not help that I was not as busy and did not throw punches from different angles, as I should have done. Nevertheless, I learned a lot from that loss that will make me a better overall fighter moving forward.”

The soon to be thirty-two-year-old, has actively planned for a successful career that keeps him connected to the sport he loves, once he does retire from fighting, which might not be for a couple more years.

For the latest updates on Traietti and his upcoming boxing events, follow him on Twitter @Granite_Chin and on Facebook at GrantieChin. For more information on his gym, hours, and rates, visit them on Facebook or online at TKO BoxFit, and/or email them via tkoboxifit@yahoo.com or call them at (339) 205-6843.