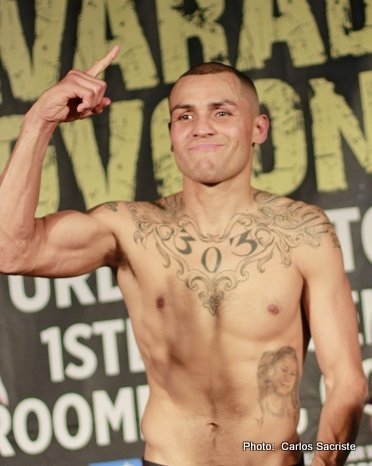 The WBO welterweight eliminator bout between former four division world champion Juan Manuel Marquez (55-7-1, 40 KO’s) and former WBO light welterweight champion Mike Alvarado (34-2, 23 KO’s) is a done deal for May 17th in a Top Rank promoted fight that will be televised by HBO from the Forum, in Inglewood, California, USA.

It’s kind of an unusual eliminator bout in that both fighters are coming off of losses. Normally, eliminator bouts involved two fighters who are coming into the fights with winning streaks and are fighting at a high level, but not in this case.

Marquez was beaten in his last fight by Bradley last October by a 12 round split decision, whereas Alvarado was stopped in the 10th round by Mike Alvarado last October.

Alvarado has lost 2 out of his last 3 fights. With that many losses in his last three fights, Alvarado really shouldn’t be considered for the fight.

The WBO has a say so in the fighters that face off in eliminator bouts, and they could surely find an opponent with a little better record in recent fights than this.

The winner of the Alvarado-Marquez fight will get a chance to fight the winner of the April 12th fight between Manny Pacquiao and Bradley. Marquez wants the fight so that he can try and win a 5th division world title. It’s something that the 40-year-old Marquez wants to accomplish before he retires. He already had one shot at trying to accomplish this last October against Bradley, but now he can get another shot if he can beat Alvarado.

If Alvarado can beat Marquez on May 17th, it would ruin what would be a big fight between Marquez and the winner of the Pacquiao-Bradley fight in September. I’m sure Arum would much prefer to see Marquez facing Pacquiao in September than Alvarado fighting him. A Pacquiao-Alvarado fight would likely do little better than Pacquiao’s recent PPV fight against Brandon Rios. How do you ask fans to pay to see a fight between Pacquiao and Alvarado?