Jeff Mayweather doesn’t see anything wrong with famous former heavyweights like Mike Tyson, James Toney, and Evander Holyfield coming out of retirement for what he views as a “Money grab’ with their charity exhibition fights.

But at the same time, he feels it’s not a good thing for these 50-something-year-old former heavyweights to be getting hit their age.

Jeff doesn’t see any problem with these old-timers coming back for money as long as their exhibition fights are at 50% capacity, but he has concerns if these guys are going to be pushing it to the limit with their training.

These are supposed to be charity events, but it’s starting to sound like the fighters are going to potentially pocket money. Just how much they will make after a portion goes to charity is unclear.

Will Tyson, Holyfield, Toney, and Shannon Briggs give every penny of their earnings to charity or will they keep a portion? That’s something we don’t know.

Fighters over 50 have no business getting hit

“They’re wearing 20-ounce gloves,” said Jeff Mayweather on Mike Tyson, Evander Holyfield, and James Toney coming back for charity boxing events. “If they’re coming back for that, but anyone past the age of 50 has no business being hit upside the head constantly.

They’ll need a doctor to attend the exhibition matches in case one of the elderly heavyweights get hurt.

It’s going to be tough on guys like Tyson and Holyfield for them to be taking punches at their age, even if large 20-ounce gloves and headgear are worn.

These guys are going to be throwing with major power, and Tyson looks like he still has a good percentage of his legendary punching power level. Additionally, Tyson’s hand speed is arguably better than any of the elite heavyweights from this era.

Holyfield, Briggs, and Toney were known for having a good chin, but they haven’t been hit by someone with Tyson’s speed and power for ages. If Tyson goes all out, it wouldn’t be surprising if he blows away those heavyweights in the first round.

“The thing is, it’s a money grab,” said Jeff on the famous retired heavyweights like Tyson, Holyfield, and Tony coming out of retirement for exhibition matches. “It’s a money grab for anyone that has a name that’s retired.

What Jeff talks about this being a “money grab” for the famous retired heavyweights suggests that this isn’t going to be 100% charity events. If they’re not fully charity events, then what name do they have for them?

They’re going to be entertaining the boxing fans and taking a risk with their health in taking part in these events. It makes sense for them to at least keep a portion of what they bring in, doesn’t it?

. If Tyson, Holyfield, Briggs, or Toney can get endorsement deals, then it wouldn’t be so bad if the money they make for their exhibition matches goes to charity. They would make massive money from product endorsements.

“I think Tyson can compete against some up and combining guys that don’t have much experience, but no, he can’t beat the top guys in boxing,” said Jeff. “Perception is not reality, and that’s what they’re looking at,” said Jeff in commenting on how good Mike Tyson has looked in working out on the mitts and body pads.

“Most of the time, once you pass 50, there’s a whole lot of things that happen to your body that nobody knows. Of course, Holyfield and Tyson is a fight that people, of course, still want to see if it could happen. But as I said, Holyfield and Tyson respect one another enough to do a charity boxing match, giving properly 50% of their skillset,” said Jeff.

For a lot of boxing fans, they see Tyson hitting these mitts in his workout videos, and they assume that he’s going to look sensational for his exhibition matches. They don’t factor in that his stamina could be shot, and his punch resistance gone as well due to age.

“I hope it just stays charity where you’re giving a small percentage of your talent, and you’re not going out and running ten miles, and training at night and training in the day,” said Jeff.

“I’m hoping that they do it for what it is to come up with a cause. I don’t know what they’re going to mandate it for but raise money for a good cause, and be grateful and get paid at the same time.

“Let’s do it,” said Jeff Mayweather when asked if he’d like to fight Roberto Duran. “F*** that,” said Jeff in responding to a question of whether he’d be interested in facing former six-division world champion, Oscar De La Hoya. “He’s in better shape than me. We can do charity.” 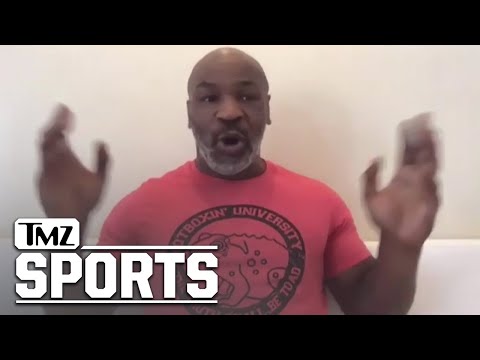