Heavyweight champion Anthony Joshua is transparent about his loss to Andy Ruiz Jr. last year in June. Joshua (23-1, 21 KOs) freely admits that he was beaten up in his seventh-round knockout loss to the American. Before the fight ended abruptly in the 7th, Joshua was knocked down four times by the unheralded Ruiz.

Joshua came back from the loss to defeat Ruiz (33-2, 22 KOs) by a 12 round decision last December in Saudi Arabia. The win by Joshua erased the defeat completely, and it’s now as if he was never beaten in the first place.

Unlike former WBC heavyweight champion Deontay Wilder, who blamed his loss to Tyson Fury on his ring-walk vest, Joshua admits that he was beaten by Ruiz. AJ’s not trying to hide from the fact that he lost on the night, which is refreshing to hear.

Boxing fans have gotten used to fighters coming up with excuses immediately after the fight to try and explain away their defeats. It looks bad most of the time as if the fighter is in denial. 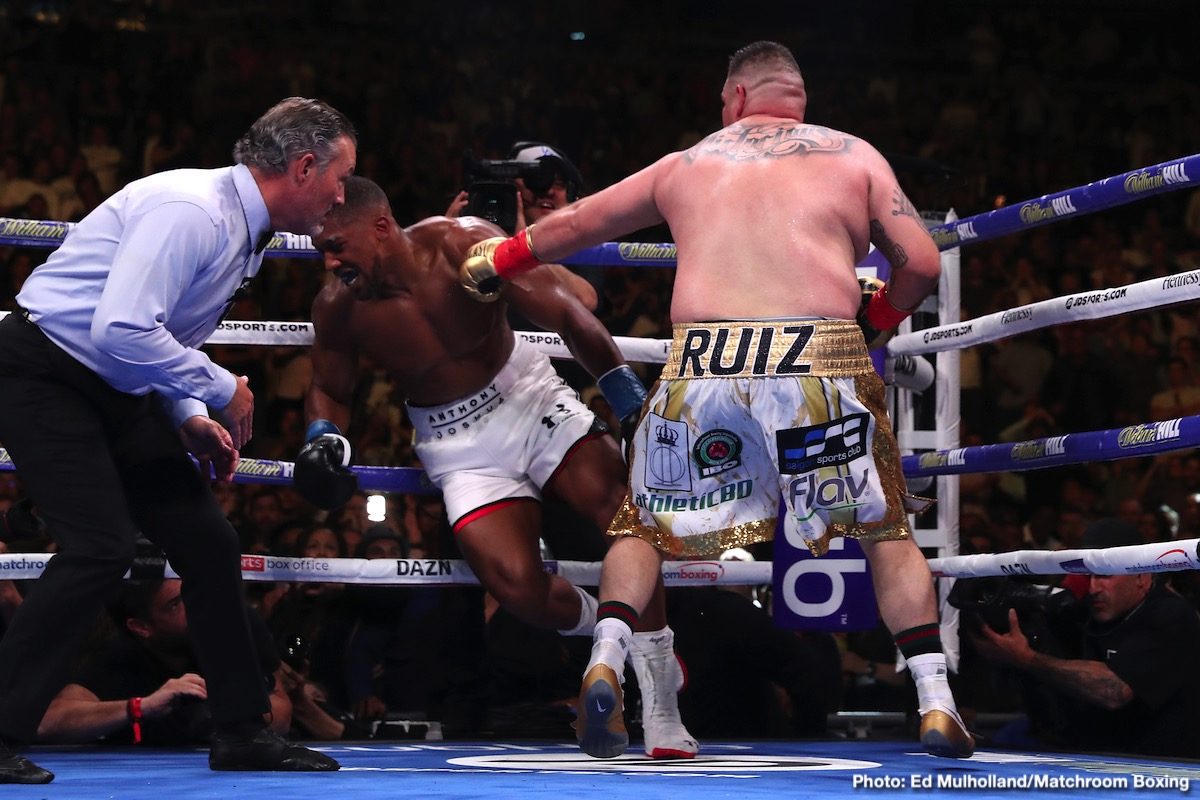 Joshua talks about his loss

“I got beat and I was shook,” said Joshua to British GQ in explaining what happened in his loss to Andy Ruiz Jr. “Everything you saw in that fight was what I was going through.

“It’s tough. It’s a hard game. I got beaten to a pulp, and I had to pull myself back together and that’s just how it went. Now they’re going to see the rebirth of me.

“Everyone wants to write me off in this boxing division, but I believe I’ll go down in this generation’s great. That’s what I’ll do,” said Joshua.

Now that Joshua has put the defeat behind him, he’s moving forward to his title defense against IBF mandatory Kubrat Pulev (28-1, 14 KOs). That fight should be taking place in the late summer, once possibly in Croatia or the Middle East. It’san important fight for Joshua because he needs to beat the 39-year-old Pulev to get to a unification fight against WBC champion Tyson Fury.

That match-up will be the biggest fight of AJ’s career, bigger even than his 2017 fight against former heavyweight champion Wladimir Klitschko. That was a hard fight, but Joshua got through it after having to climb up off the deck in the sixth round.

AJ dealt with his loss and came back

“So what I went through then. I got beaten up, and I got to deal with it,” said Joshua. “You’ve got to take it on the chin. That’s what I think.

“You’ve got to keep moving forward even when the whole world is against you. I feel like as I get older, I’m becoming a lot more stronger and resilient.

The loss for Joshua was a good thing because he learned a couple of things from it, and they are as follows:

Joshua will be fighting a lot smarter from this point on, and he’s not going to put himself in the same situation he was in the first Ruiz fight.

Ruiz Jr didn’t beat Joshua up in the classical sense. Joshua was hurt in the third round after eating a left hook seconds after knocking Ruiz Jr. down. The knockdown that Ruiz scored against Joshua hurt him to the point where he couldn’t recover.