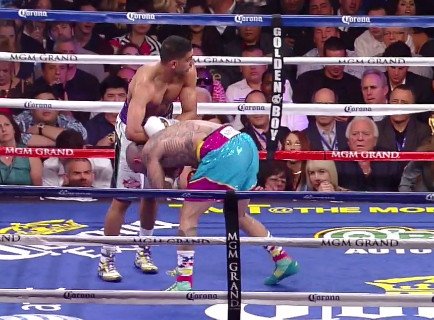 “I hope so,” Roger M said when asked by Hustleboss.com if a fight between Mayweather and Khan will be taking place next year. “It’s a good fight.”

Mayweather hasn’t said whether he’ll be facing Khan in the future. Mayweather appeared to be kicking around the idea of a fight against Khan before his last fight in May. He asked fans to pick between Khan and Marcos Maidana on his Mayweather Promotions website.

Khan won the poll, but he lost other polls and Mayweather chose to go with the results of the other polls. Khan had encouraged his many twitter followers to vote for him after Maidana jumped out to a huge early lead on Mayweather’s website.

Khan didn’t do himself any favors in trying to get the Mayweather fight with his performance against Luis Collazo on the Mayweather-Maidana fight card last May. Instead of just boxing Collazo toe-to-toe or using a little movement, Khan instead opted to hold all night and yank down on Collazo’s head. Khan played it a rough fight but he did it in a way that prevented Collazo from getting his shots off due to the frequent holding.

Mayweather never spoke about what he thought of the Khan-Collazo fight, but it probably didn’t encourage him to want to go out and fight Khan. If Mayweather feels he’s going to be held 10-15 times per round by Khan, it’s a fight that would be very difficult for Mayweather to get his shots off, as it would be difficult for anyone. Khan might have ruined his chances for a Mayweather fight with that performance.

Mayweather has other options for his final two fights on his Showtime contract. He can fight the winner of the Kell Brook vs. Shawn Porter fight, and there are big money rematches against Saul “Canelo” Alvarez and Miguel Cotto.