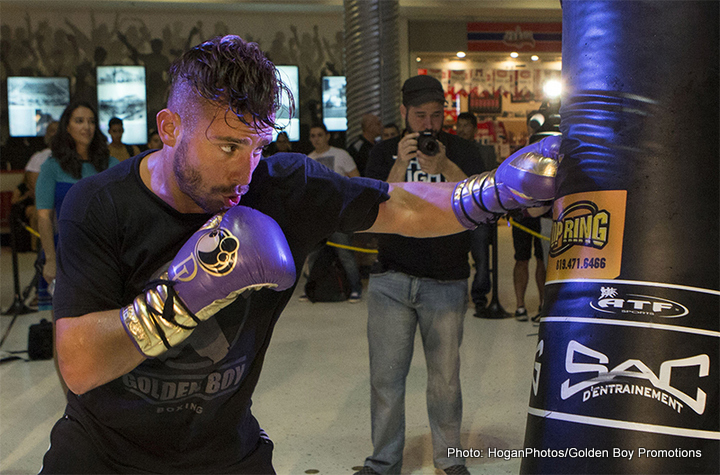 Whatever happens this Saturday at Madison Square Garden, IBF middleweight champion David Lemieux, will receive huge credit for signing to fight dominant WBA boss Gennady Golovkin, and nominating to sign for a dangerous unification immediately after winning his IBF crown against Hassan N’Dam, rather than take a couple of ‘soft’ voluntary defences first.

The Canadian star claims he has had the best camp of his career in the build up and is more than comfortable with the underdog tag he’s been branded with, claiming that when the upset comes, it will make victory all the sweeter.

“I’m ready. It’s now or never. He’s at his best. I’m getting to my best. We took a big step, and we’re ready for it,” the Golden Boy promoted fighter stated last week.

“The [PPV] numbers speak for themselves. Everybody understands the gravity of this fight. I think people are going to be surprised with what I bring to the table.

“I’m a big underdog, which is perfect by me. It’s not a problem. I know who I am. I have a lot of confidence in myself.”

The two big-hitters, who possess 61 knockouts between them from 67 victories, are set to clash in arguably the most anticipated fight of the year so far aside from Mayweather/Pacquiao, and if one thing is guaranteed, it’s that we will see more action than May 2nd, yet Lemieux knows he cannot rely on his vaunted hooking and power alone, and will need far more than that to beat his Kazakh foe.

“It’s not about power. It’s about character, toughness and determination,” he said. “We’re both hard punchers; everyone knows that. Let’s see beyond that.

“I’m going to be well prepared with my abilities and skills, my strengths. I’ll be a complete fighter. I’m not just David Lemieux, the power puncher. I’m also the fighter. I’ve never had a more complete camp than this.

“Golovkin’s very good – but I’m also very good. Being the underdog, it’ll be even better for me when I win. It makes no difference,” he added. “The objective is to walk out of Madison Square Garden with those belts – and, hopefully, without a broken nose!”

Golovkin/Lemieux is live Saturday on HBO PPV (US) and Boxnation (UK).