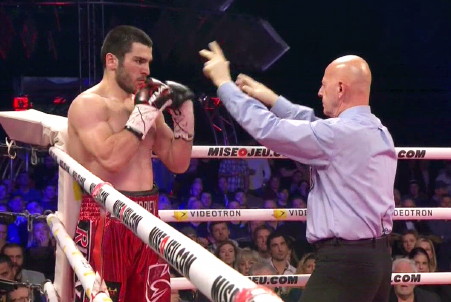 Former WBC light heavyweight champion Jean Pascal, who appears to be tired of seeing WBC 175 title holder Adonis Stevenson face weak opposition, suggested recently that Stevenson should face contender Artur Beterbiev (7-0, 7 KOs) in his next optional defense so that he can rebuild his image with the boxing public.

Stevenson won over a lot of boxing fans with his 1st round knockout win over Chad Dawson last year in June of 2013. Since then, however, Stevenson has backed off from tough opposition and beaten Tavoris Cloud, Tony Bellew, Andrzej Fonfara and Dmitry Sukhotsky. Pascal wants to see Stevenson rebuild his name because he wants his fight against him in 2015 to be a big event. It’s not likely to be a big even with the kind of opposition that Stevenson has been facing.

“If he has another voluntary defense, I would love to see him fight Beterbiev. I think that’s the only way he can save face and start to rebuild his image, which for some reason he felt like destroying in 2014,” Pascal said to RingTV.com.

Beterbiev would be a very big test for Stevenson even though the Russian fighter is short on experience and isn’t ranked in the top 5. Beterbiev showed recently in his fight against Tavorius Cloud that he has the kind of power that would give anyone in the division major problems.

The question is can Beterbiev handle Stevenson’s hand speed and his elusive fighting style? It would be a major step up for Beterbiev from the guys he’s been facing, but at 29-years-old, Beterbiev has the age the amateur experience that would suggest that he’s ready for a fight against Stevenson.

Beterbiev’s handlers can wait for him to pick up more experience, but it’s still not going to do anything about Stevenson’s hand speed advantage over him. That won’t go away. Beterbiev is going to need to learn how to close the distance against fighters with Stevenson’s type of speed if he wants to be able to beat them.

Beterbiev would be a big upgrade from the guys that Stevenson has been facing recently, and it could be a real problem for the Canadian fighter if he’s unable to score a quick knockout. The longer that Beterbiev is able to hang around in a fight against Stevenson the more likely he’s going to hurt him with something on the inside.

Beterbiev does a great job of smothering his opponents in the same way that Andre Ward does, and he could make this an inside fight against Stevenson. As we’ve seen in Stevenson’s past fights, he has no inside game to speak of. This means that if Beterbiev is able to smother Stevenson’s outside game then he could very well score a knockout on the inside.

Stevenson’s manager Al Haymon has been very selective in the kinds of opponents he’s matched him against. Beterbiev would probably be the last guy that he would put in with Stevenson. In an example of that, there’s a chance that Stevenson will be facing Fonfara in a rematch next March instead of him facing someone dangerous like Beterbiev. Stevenson already beaten Fonfara last May by a 12 round decision.