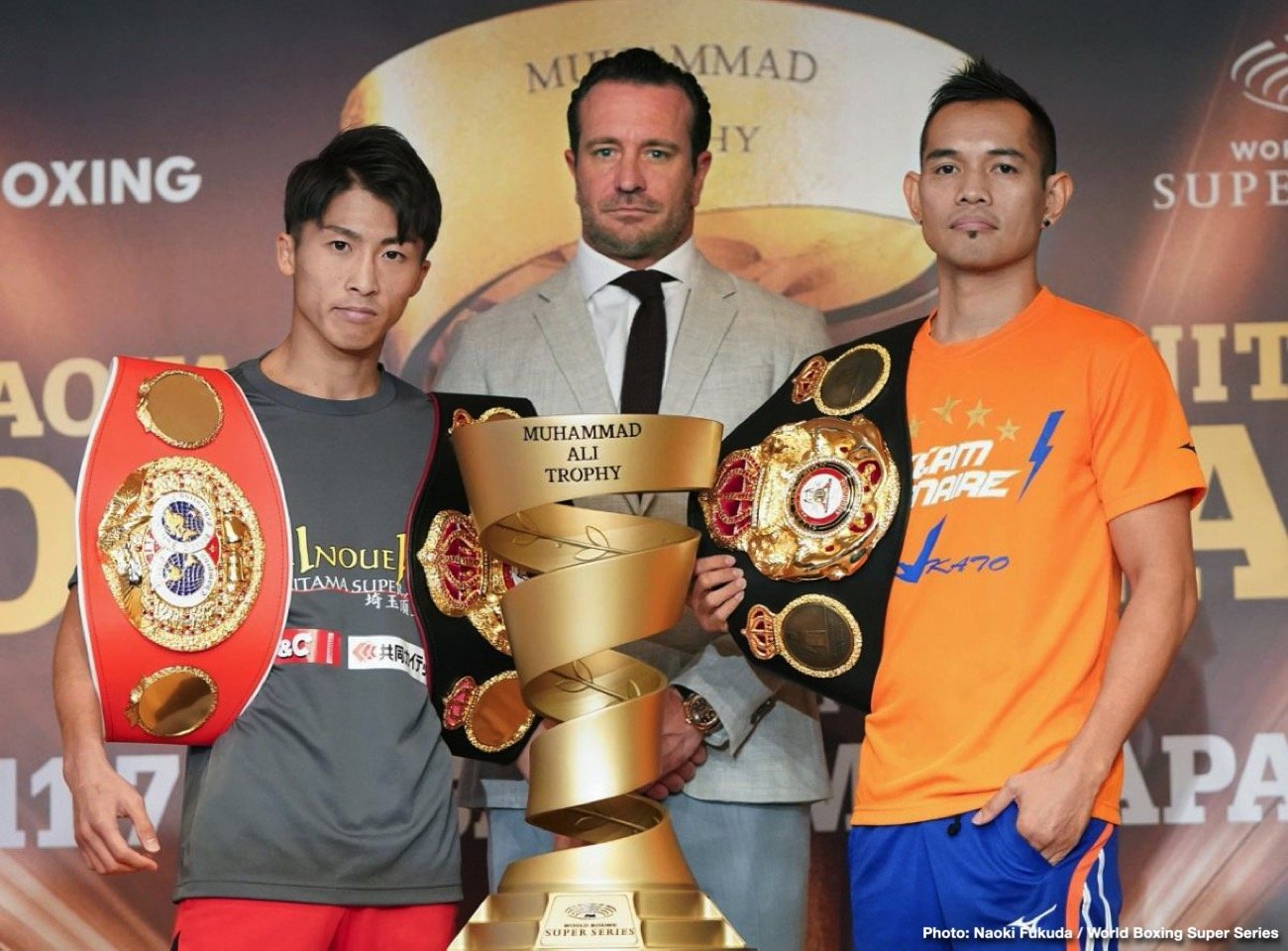 Inoue at final press conference: “I want to be the greatest of all time!”

“A year ago this tournament started, a year later I am in the final against Nonito Donaire, and I am very grateful for that,” said 26-year-old Inoue at a jam-packed final press conference in Tokyo.

The IBF and Ring Magazine champion at 118 pounds told him he grew up being a fan of his Filipino counterpart.

“I’ve been watching Nonito’s fights even before I became professional, and he’s one of the fighters who I admire. I am truly proud of myself to be in the ring with him the day after tomorrow.”

The Muhammad Ali Trophy was on display on a plinth just on the right side of the Japanese superstar at the top table.

“It’s a beautiful trophy, I like the design,” said ‘The Monster’ about the ‘Greatest Prize in Boxing’ named after ‘The Greatest of All Time’. As if he was inspired by WBSS’s virtual ambassador he went on to say:

“The winner of this tournament will be crowned as the greatest of the division. I am representing Japan as a professional boxer and I will show the greatest performance of my career as an answer to all the exceptions here.

“The appeal of the WBSS is that we can decide who is the best in the division. I would like to be victorious, but I’m not stopping there. In the future, I want to be the greatest of all time!”

“Naoya is the top fighter in the world pound-for-pound which is very exciting for me. But I trust in my ability, and I will be able to adapt to the situation.

“Fighting Naoya Inoue has given me motivation. I’ve accomplished so much, so I needed someone to motivate me. It’s brought back my youth again because I have to be at my best.

“Being in this tournament has been tremendous. All these young guys trying to prove themselves and weed out the old generation. But so far, I’ve proven I’m a wall that needs to be climbed, and it’s not an easy wall to climb.”

Said Kalle Sauerland, Chief Boxing Officer of the WBSS: “Two weeks ago we witnessed what was potentially the Fight of the Year (WBSS 140-pound final – Josh Taylor MD 12 Regis Prograis) at The O2 in London, and this Thursday we have another fascinating final. Donaire, the old lion protecting his lair vs Inoue, the pound-for-pound king at the moment.”

The tournament No. 2 seed knocked out former champ Juan Carlos Payano 70 seconds into their quarter-final and then stopped Emmanuel Rodriguez in round two of the semi to claim the IBF World title as he blasted his way to the final contest for the coveted Ali Trophy. His total fight time in the tournament is an astounding 5 minutes and 29 seconds, but the best is yet to come, the ‘Monster’ vows.

Did you ever believe it would only take you 5 minutes and 29 seconds to reach the final?

What is your prediction for the final?

“I’m prepared to fight for 12 rounds with Nonito Donaire, but if I see an opening, I will aim for a knockout.”

What is your assessment of Nonito Donaire? What are his skills and abilities?

“I have been watching Donaire throughout his career and was stealing his moves when I was starting out in boxing. I have a lot of respect for Donaire, I have idolised him and that’s why he was the one I wanted to fight the most in this tournament. But now it’s time for a change of generations.”

What would it mean to you to win the WBSS and Ali Trophy?

“I entered this tournament to prove I am the best bantamweight in the world. I’m in great condition and on November 7, I will show the best performance of my career to win the Ali Trophy.”

What is your greatest motivation and what is your ultimate career ambition?

“This final will be the biggest highlight of my career thus far. It will also be like a crossroad fight for what lies ahead for my future. I’m just looking forward to seeing what is waiting ahead in my career after winning the Ali Trophy.”