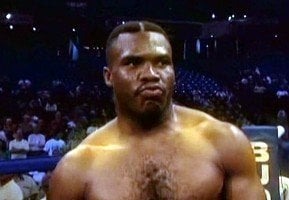 Still, the management team that support their fighter – Bill Hodge and John Wilkinson – remain hopeful, the BN piece reads, that Ibeabuchi WILL soon be released and that he will then resume his boxing career. So, will freedom soon be Ibeabuchi’s (he was denied parole in the years 2004, 2007, 2009 and 2012) and will he be in anything approaching adequate physical condition to be able to begin even a very slowly paced return to the rigours of hard training if he does get his wish?

Ibeabuchi, who last fought in 1999, crushing the gifted and hard to hit Chris Byrd – Byrd being done in by a smashing head shot in the 5th-round (“Oh, I was out of it after that shot, man!” Byrd told this writer a while back when speaking on the March ‘99 fight) – could weigh anything from 300 to 330-pounds right now. We’ve all seen the photo of a shackled and fully bearded Ibeabuchi, daubed in his prison clothing, and he looks hugely over his fighting weight; this photo being a number of years old.

So, even if Ike is to be released soon, this year perhaps, he will have to concentrate on shifting a ton of weight before he can even think about any other aspect of training. But it’s likely, even a near certainty, that Ibeabuchi will fight again if he is released any time soon. What else is the man going to do? Many people were convinced that Ibeabuchi was destined for greatness in the ring before he began acting more and more strangely (allegedly insisting on being called by his “President” nickname at all times, to say nothing of the ordeal he allegedly put that girl through in his Las Vegas hotel room) – Ibeabuchi himself feeling he was something special.

The age of 41 is advanced for a boxer, yet this number is unlikely to deter Ibeabuchi. And we have seen ageing heavyweights return and enjoy success before (think Foreman, Holmes). Still, 1999 was a heck of a long time ago and hard prison time is no joke. How much the 15 years inside has taken out of Ibeabuchi we can only speculate.

But don’t be surprised in any way if the heavyweight division – a weight class that has been littered with unlikely ring returns over the years – sees yet another comeback quite soon. Ibeabuchi is currently 20-0(15).