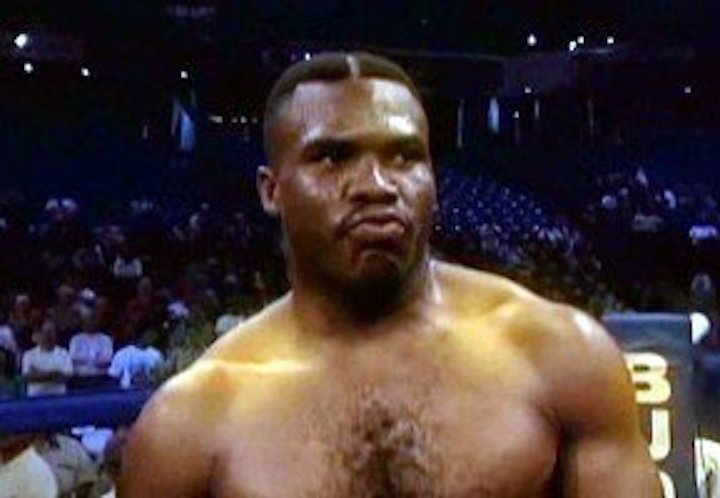 The name Ike Ibeabuchi still resonates with fight fans. To this day, we all wonder how much this skilled, strong, powerful and tough heavyweight might have gone on to achieve had he not imploded the way he did shortly after what turned out to be his last appearance in the ring – this an explosive KO win over Chris Byrd in March of 1999.

Ibeabuchi was then 26 years of age, he was a perfect 20-0(15) and he seemed set not only for a title shot, but for a reign, perhaps a long and dominant one, as world heavyweight champion.

Indeed, for a time, the 6’2” Nigerian who looked as though he was carved from bronze really did seem to have it all.

As a young man, Ibeabuchi’s life was changed overnight as he watched the Buster Douglas-Mike Tyson fight. Ike now wanted to be a fighter, he had to be a fighter. Relocating to Dallas, Ibeabuchi had a short amateur career, winning the Dallas and Texas State Golden Gloves tournaments in 1994. Going pro in October of 1994 and trained by former welterweight champion Curtis Cokes, 21-year-old Ibeabuchi would go on to generate genuine excitement during a time when the heavyweight division was rich with big stars and great fighters.

Ibeabuchi flew under the radar during his first 16 pro bouts, beating the usual collection of journeymen and trial-horses – Anthony Wade, Marion Wilson and, for some reason fighting him twice, Calvin Lampkin. Ibeabuchi fought mostly in Texas during this time. Then, in June of 1997, in Sacramento, the 16-0 Ibeabuchi had his coming out party. Facing the experienced powerhouse that was a prime David Tua, Ibeabuchi was mightily impressive in winning a hard, hard 12 round decision over the 27-0 Tua.

In fact, both men went to war over 12 of the greatest rounds of heavyweight action seen in a decade that was filled with great fights. Together, Ibeabuchi and Tua set a punch-stat record for most heavyweight punches thrown. Ibeabuchi had shown everything in the epic battle: power, fitness and stamina, a heck of a solid chin, excellent skills, and enormous desire and fighting heart.

There were, however, just three more fights to come. It wouldn’t be long before Ibeabuchi lost his mind. Some say the damage, the neurological damage, was done in the Tua slugfest. Shortly after the Tua war, Ibeabuchi began acting strangely. Responding to a request only if he was addressed by his nickname of “President,” Ibeabuchi alarmed promoter Cedric Kushner one evening, when he suddenly began slamming a knife into the table during dinner at a fine restaurant – “They knew it! They knew it! The belts belong to me!” Ibeabuchi screamed in disturbing fashion. Nobody knew who “they” were.

A year went by before Ibeabuchi fought again. Following the Tua win with two stoppage wins over decent but not highly ranked fighters, in Tim Ray (KO1) and Everton Davis (TKO9), Ibeabuchi then destroyed the slick and tricky Chris Byrd in what turned out to be his final fight. With everyone now massively interested in Ibeabuchi, with most of these people feeling he was definitely world championship material, Ike completely lost the plot.

Fans familiar with the story know all about how Ibeabuchi imprisoned a call girl in his Las Vegas hotel room in July of 1999, how he was then sentenced to two to ten years in prison. It was over, Ibeabuchi’s ultra-promising career had been snuffed out by his own disturbed mind. Who knows how far Ibeabuchi might have gone.

In 1999/2000, the world heavyweight champion was Lennox Lewis. Would Ibeabuchi have been able to defeat Lewis? Maybe, maybe not. What we can all agree on is how great a fight, how tough a fight this one would have been, for both men. We might have seen an all-time classic heavyweight battle. This is how good Ibeabuchi was, how gifted and talented a fighter he was in the years 1997 to 1999.

Today, Ibeabuchi is a 47-year-old man who knows he will forever be haunted by thoughts of what he might have achieved in life had he managed to hold it all together. Tragic is the only word one can use to describe the Ike Ibeabuchi story.