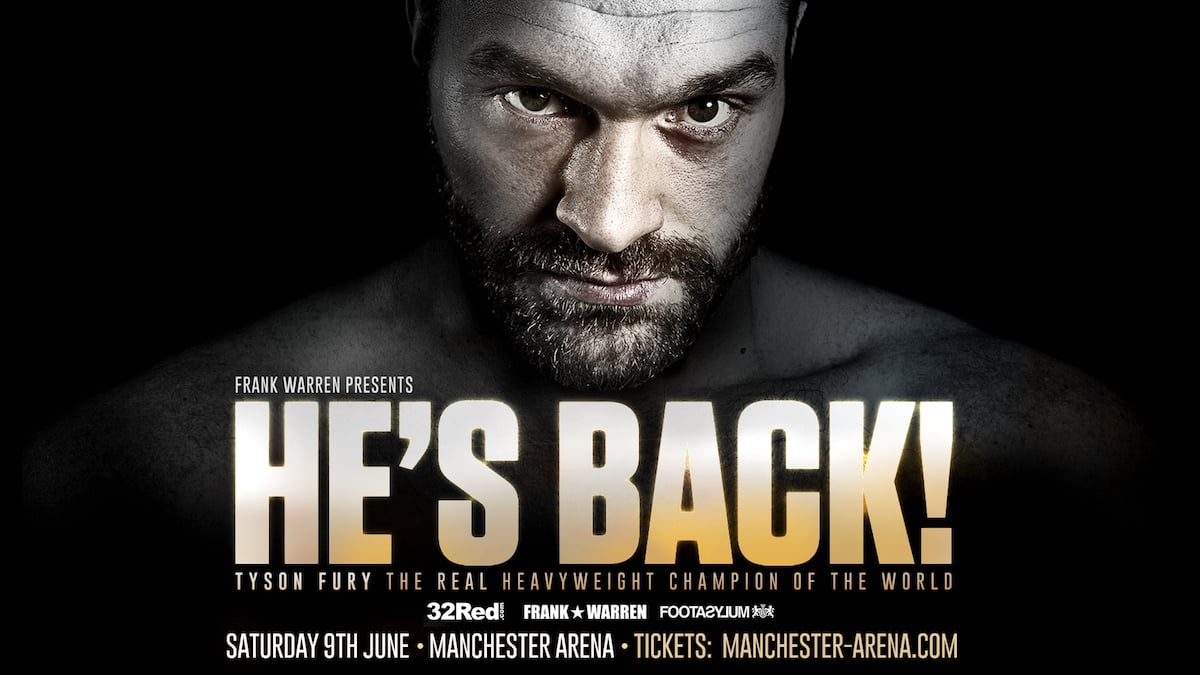 As was anticipated, former, and unbeaten lineal heavyweight champ Tyson Fury today at a press conference in London announced his signing with promoter Frank Warren and his comeback date and venue. Disappointingly though, Fury did not name the man he will be fighting at The MEN Arena in Manchester on June 9.

Fury though, looking slim and fit, said he is “ready to fight” and that he is on a mission to “reclaim the world.” With plenty of members of the fight media in attendance, Fury, who, Warren reminded us, never lost his titles in the ring, was all smiles.

“[I’m] the best heavyweight in the world,” Fury stated. “It’s been a long, complex, drawn out situation. I’m glad it’s behind me now. I’m back to reclaim what is rightfully mine and that’s the world. I hold it in my hand right here. It’s going to be an interesting journey. There’s a lot of challenges I’m looking forward to.”

Warren, who will guide Fury over the foreseeable future, Tyson having signed a multi-fight deal with the promoter, said the reigning champions, Anthony Joshua and Deontay Wilder, “cannot call themselves the champion until they fight Fury.”

“We’re going to get him to a position to challenge for the world heavyweight titles, the titles he never lost in the ring,” Warren said today.

So Fury will headline a show at The Manchester Arena on June 9, but we must wait to find out who his dance partner will be. Jokingly, Fury said “I’ll fight Carl Froch or I might fight Prince Naz. He’s looking a bit beefy.”

More seriously, Fury, 25-0, said how “Today what we have is sluggers and wild punchers. I’m looking forward to putting on a display. I’m ready to fight.”

It’s been some time since Fury last fought – November of 2015 when he sensationally;y dethroned world champ Wladimir Klitschko in Germany. How much of that Fury remains left intact today? Hopefully we will soon find out.