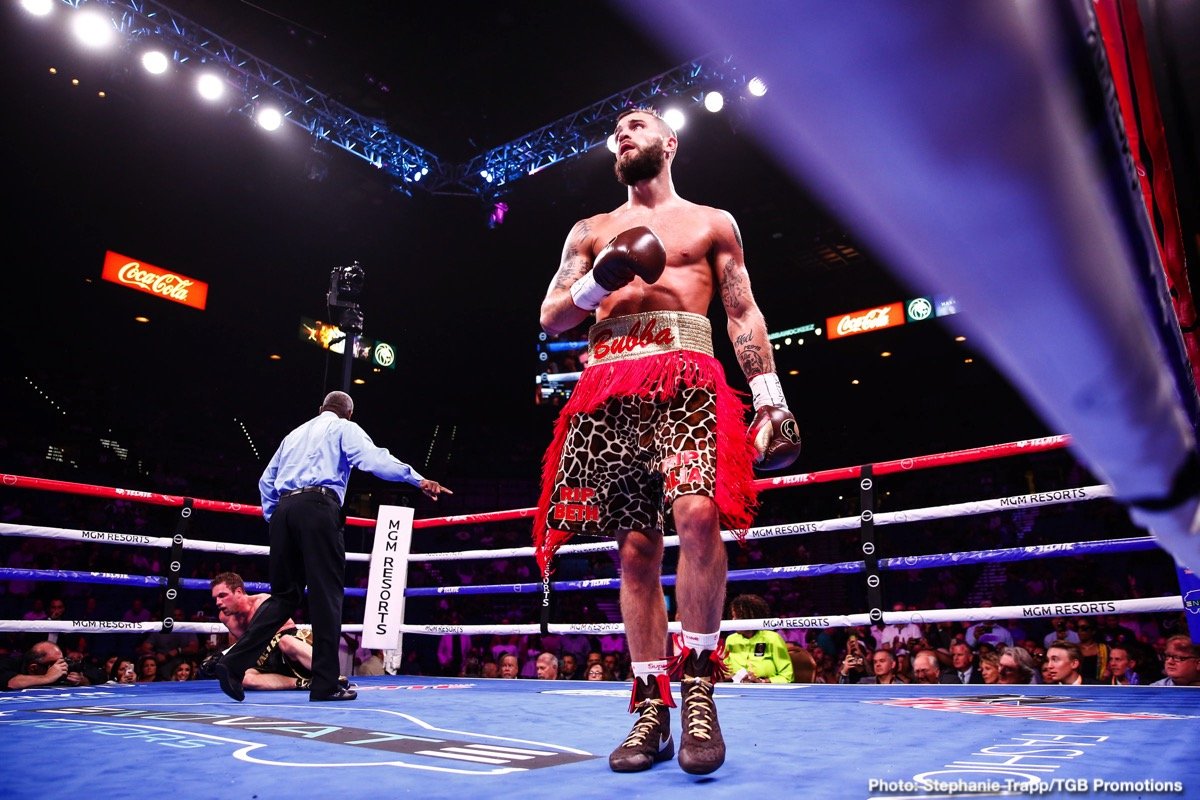 Canelo Alvarez’s promoter Eddie Hearn says Caleb Plant is a “massive B-side” in November’s potential fight with the Mexican superstar. If he wants the opportunity to face him, he’ll agree to the terms.

Plant was reportedly unhappy recently over one of the deal points for the negotiations with Canelo for a September 18th fight. Whether Canelo will back down from this sticking point is unknown.

If not, Plant and his management at Premier Boxing Champions will need to decide whether it’s worth meeting Canelo’s request.

For Plant, he might not have any other choice if he wants to get a career-high payday of $10 million.

Although Plant says he’s not in the sport for the money, the interest that he’s showing in making the Canelo fight suggests otherwise.

If Plant doesn’t agree to what Canelo wants in the negotiations, the alternatives for him could be ugly and harsh, with David Benavidez and Jermall Charlo waiting in the wings to rip his IBF 168-lb title from him.

The IBF title is the only thing Plant has going for him right now for all intents and purposes. He doesn’t have a resume of great victories over elite-opposition, and he’s not particularly popular.

Canelo wants Plant’s IBF belt, and that’s the only thing that gives him a chance to get this fight.

Plant is a massive B-side for Canelo

“It’s not really any new demands. This is just something that comes with fighting the pound-for-pound #1 fighter,” said Matchroom Boxing promoter Eddie Hearn to Behind The Gloves on Canelo, recently wanting something in the negotiations with Plant that his management wouldn’t agree to.

“He [Plant] doesn’t have to [agree to the deal with Alvrez]. He can do what he wants to do. But he has to understand; he’s a MASSIVE B-side in that fight, a massive B-side. But he’s a world champion, and much respect for him.

“If he doesn’t like some of the terms, there’s a word called ‘negotiations,’ and that’s over to the lawyers and all those guys,” said Hearn.

The way Hearn is talking, one can tell that he would prefer that Canelo face his fighter Dimitry Bivol rather than Plant.

Hearn promotes Bivol, and he was looking forward to making the fight between them recently until Saul had a chance of mind, wanting to return to the negotiations with Plant.

It’s debatable whether Canelo’s true interest in fighting Plant is for the sake of his legacy in becoming the first undisputed champion at 168. You can argue strongly that the REAL reason for Canelo wanting to fight Plant is because of this:

If Plant persists in resisting agreeing to Canelo’s deal points during the talks, he could wind up nothing. In that case, Canelo will move on and face either Jermall Charlo or Bivol.

Depending on whether the International Boxing Federations moves David Benavidez to the #1 spot in their rankings at 168, Plant could be stuck having to defend against him.

That would be a terrifying match for Plant, as Benavidez is clearly the #1 fighter in the 168-lb division, and he’s all wrong for the IBF belt-holder

“I know with that fight, I don’t want to get involved and start arguing with people, and he don’t like me,” Hearn continued. “Guys, crack on. I’m here for Canelo, I’m promoting Canelo, I’m on his team, and that’s how that one works. 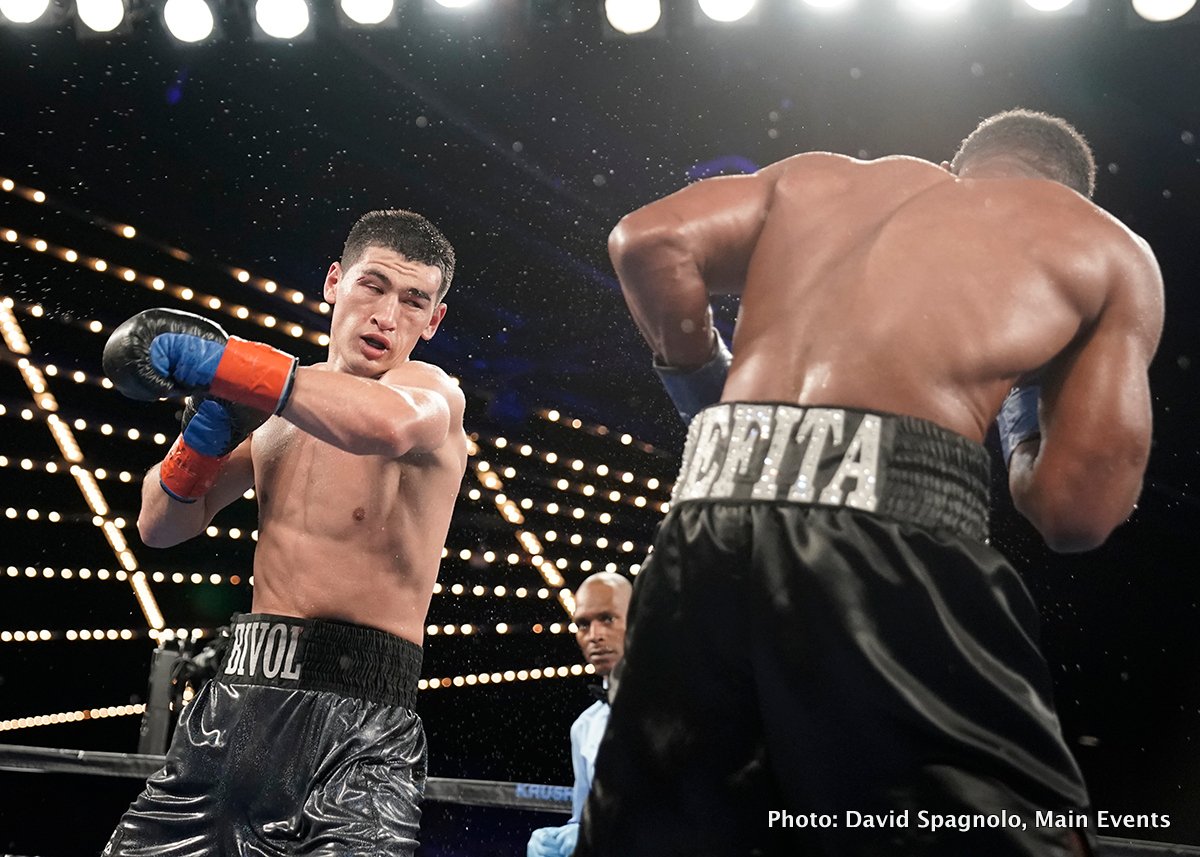 “Eddy Reynoso and whoever else will deal with those lawyers, and we’ll see if they can find some middle ground. If they can’t, I believe he’ll [Canelo] fight Dimitry Bivol.

“Obviously now, that’ll happen at the end of October or November,” Hearn said about Canelo’s potential next fight against Caleb Plant.

Hearn seems to be banking on Canelo, turning his attention to Bivol (18-0, 11 KOs) if his negotiations with Plant turn sour again. I don’t know if that’s going to be the case.

Canelo may have sat down with his eagle-eyed trainer/manager Eddy Reynoso, taken a close look at Bivol’s fight with Joe Smith Jr, and concluded that it’s not a desirable match-up for them.

The way that Bivol dealt with Smith in easily beating him, you’d have to make Canelo the clear underdog against the Russian fighter. Canelo and Reynoso obviously understand what they’d be up against in facing Bivol.

Hence, they may choose to swerve him and head towards safer waters against Jermall or 40-ish Gennadiy ‘GGG’ Golovkin. If you were a betting man, Jermall and Golovkin are likely the next two fights for Canelo after Plant.

If the Plant fight fails to materialize, Canelo will almost surely take on Jermall next, provided he can negotiate a deal with PBC. The negotiations for a fight with Charlo could hit the same sticking point as the Plant talks if Canelo wants the same money for a replacement opponent as he would for the Jermall match.

Canelo will move on if Plant doesn’t agree to terms

“Don’t forget, this isn’t a one-sided thing,” said Hearn when asked if Canelo will have to back down from some of the deal points that he wants for his negotiations with the unbeaten Plant.

“If Caleb Plant wants the opportunity and believes he can win, this isn’t stuff that is really going to affect him. A lot of this stuff that Caleb Plant is mentioning has no bearing on him. It’s more of a responsibility of the promoter to deal with these things.

“If Caleb Plant wants the opportunity [to fight Canelo] and believes he can win, he’ll take the fight.

“I hope they get it made. That’s what [manager/trainer] Eddy Reynoso wants and Saul, but they also are ready to move onto another fight if that can’t get made,” said Hearn.

It’ll be interesting to see how long the negotiations drag out before Canelo abandons them and moves in another direction. Canelo can’t afford to burn through too many months trying to get the fight done if he wants to fight in November.

13 thoughts on “Eddie Hearn: Plant is a massive B-side for Canelo fight”