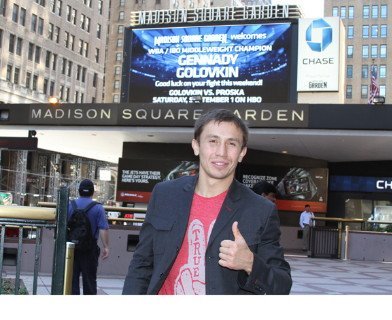 Devin Haney wants Javier Fortuna fight
Unless Proksa is able to dodge Golovkin’s attacks and hurt him before he gets in close, it’s going to be a painful night for Proksa. Oddly enough, Golovkin doesn’t seem to lose any power when throwing shots from a short distance and that makes him very dangerous for Proksa. The odds are high that Golokin is going to get inside on Proksa and once he does he’s going to make the Polish fighter miserable in front of a nationwide audience in the United States watching the fight on HBO.

Proksa’s only real chance of winning this fight is if he can keep moving for 12 rounds like Martinez does. It’s going to be difficult because Golovkin is an expert at cutting off the ring and working his way inside like a younger version of Julio Cesar Chavez. Golovkin can hurt you to the body or head, and that’s going to make it even tougher for Proksa, because he usually doesn’t get hit to the body that much because of his style of fighting. It’s going to be new experience for him and he probably won’t do well with it.