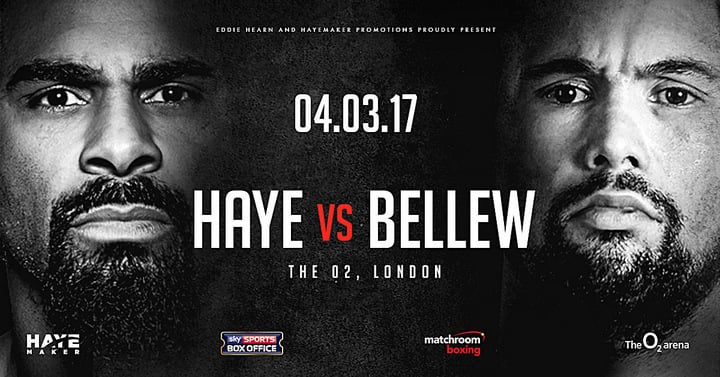 By the time David Haye meets Tony Bellew in the centre of the ring on March 4, 2017, at the O’2 Arena in London, we will already have witnessed a build-up that many would have paid to watch regardless of the fight itself, given the personalities of both fighters and the needle taht exists between them.

The surprising thing about this contest is that it arrived out of nowhere. Bellew had just climbed off the canvas at Goodison Park after being dropped in the first round of his vacant WBC cruiserweight title fight to destroy Ghana’s Ilunga Makabu in the third, nailing him with his trademark left hook in front of 30,000 raucous fans in the summer. Though Bellew has never been a fighter anyone would ever confuse with Bambi, the rant he delivered upon taking the mic after the fight was so raw it could only have come from the soles of his feet, during which he called out the ‘Bitch from Bermondsey’, excoriating him for “conning the public” over the course of two comeback fights against terrible opposition.

Bellew, who recently tasted the limelight as Ricky ‘Pretty Boy’ Conlan in Sly Stallone’s well received Rocky spinoff movie, Creed, is not easy to like. He comes over as boorish with a bully-boy mentality at times. Moreover, his smack-talk about Haye’s “sponge haircut” carries with it a racial connotation that he needs to drop, else the build up may well spill over into the kind of nastiness that boxing doesn’t need. That said, you can’t argue with his achievements in the ring, testament to his dedication and the fine work that he’s put in with his trainer Dave Coldwell. His most recent demolition of B J Flores proved that his victory over Makabu was no fluke. Though possessing a body that wouldn’t look out of place at McDonalds, Bellew carries real power in his hands, in particular a left hook that is a true thing of beauty.

As for David Haye, what can you say about a guy who when at his best is one of the most exciting fighters on the planet? Though justifiably attracting criticism in recent times for being overtly mercenary in his approach to the game, taking fights against less than credible opposition and taking the boxing public for a ride in the process, he is no hype-job and can really fight. Since teaming up with Shane McGuigan, joing a stable that includes his old Adam Booth stablemate George Groves, along with Carl Frampton and up and coming star Josh Taylor, Haye appears to have rediscovered his taste for the game. A big factor in that is of course his recovery from the bad shoulder injury he sustained during camp while getting ready to face Tyson Fury back in 2013. It seemed at the time he was looking at retirement, yet a year later he’s back getting ready to face Tony Bellew in a highly anticipated encounter.

The smart money has to be on Haye, given his experience of operating at heavyweight plus the fact he is the technically superior fighter. Yet, saying that, the Liverpudlian and Evertonian has made a career out of proving people wrong. Clearly he will be relishing the opportunity to do so again.

For the purists out there this fight is being decried as a mismatch, pitting a crusierweight against a heavyweight. But Haye is no natural heavyweight and will no doubt come in lighter than he normally does. He could do with boiling off some of that muscle mass he carries anyway, and in terms of bone-structure, height and overall dimension he and Bellew are not that far apart.

For Bellew this fight is a win-win, as no matter what happens he remains the WBC cruiserweight champion. He and Coldwell are banking on the fact that Haye has not been seriously tested since his fight against Dereck Chisora in 2012. They maintain that they see flaws they can exploit, which in conjunction with the momentum Bellew is currently riding on the back of two impressive performances gives them every reason to feel confident.

Regardless, my money is on David Haye. He’s faster, more explosive, with experience of having been in with seasoned heavyweights. Though getting on in years, he hasn’t taken huge punishment in the ring, and as for the lack of decent opposition he’s faced since returning to the ring, this will not, I contend, be as much of a factor as some maintain. He is undoubtedly up for this battle, which will tell in the quality of the sparring and sparring partners he will use to get himself ready.

I don’t see one this going past four rounds.