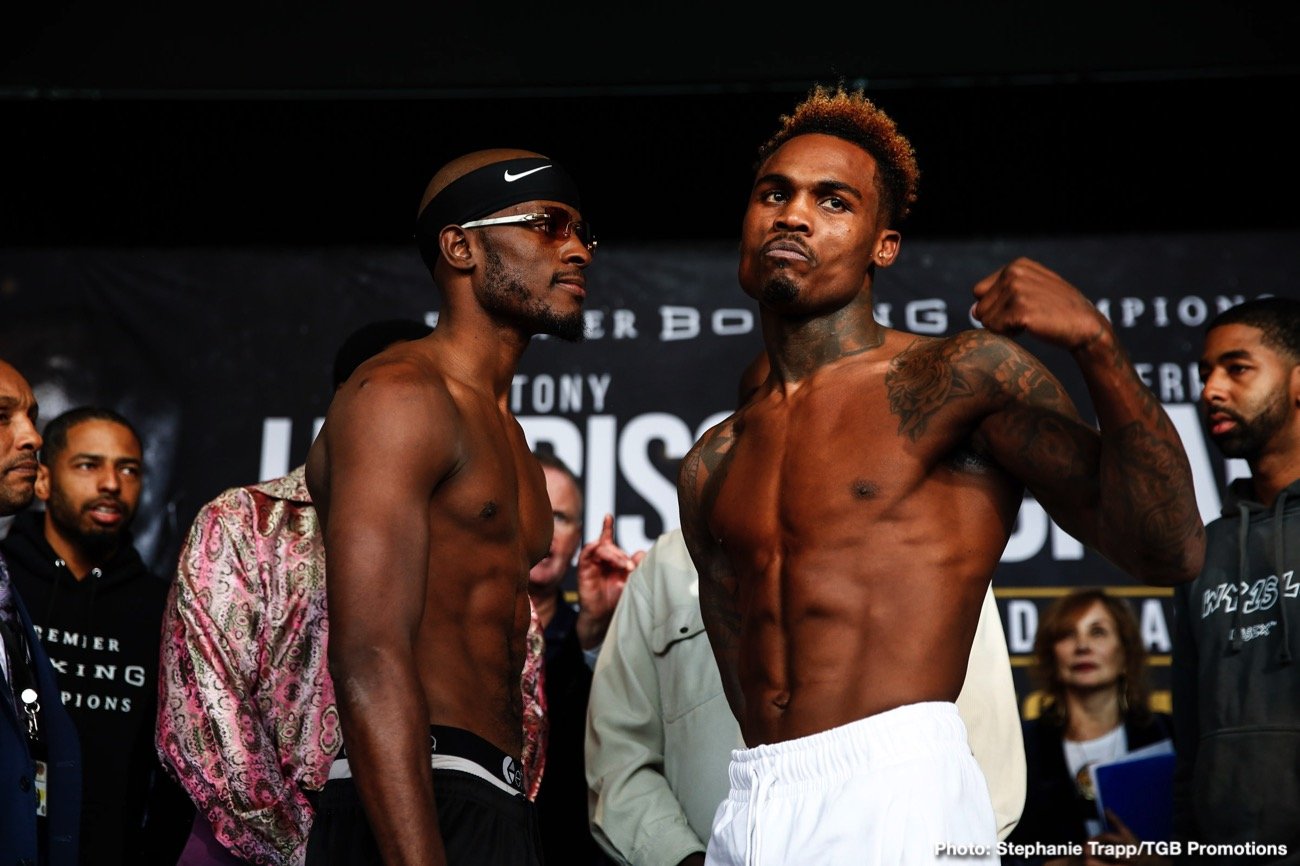 Live on free-to-air FOX, Tony Harrison and Jermell Charlo compete in a rematch from a year ago almost to the day. The trash talk between the two fighters has been a breath of fresh air to any boxing fan who really likes well-cooked beef. What could be different Tony this time around as the hunted and will Charlo show more patience as the hunter? Unfortunately, Guillermo Rigondeaux will not be on the card because of Visa issues with his opponent Jorge Solis.

“What’s Beef” is a song by the legendary hip-hop icon, Notorious B.I.G. which just so happens to be very fitting when it comes to this fight rewind. As the song goes, “What’s beef, beef is when you make your enemies start your jeep, beef is when you roll no less than 30 deep.” Most of the time we as boxing fans can tell if a boxer is piping up for attention on social media to help draw eye balls to him or her. Sometimes it comes across as fake and corny other times is really genuine. In this case both Harrison and Charlo straight up do not like each other so there shouldn’t be any love lost in the ring come Saturday. The shoulder programming on FOX has been spectacular as these two have spared no words in the build-up to this junior middleweight tussle.

Their first meeting came as the co-feature to Jermell’s brother Jermall Charlo who snuck by with a decision over Matt Korobov. Saturday’s main event will be going head to head with an NFL football game but as long as they show up to fight it should peak at a nice number to close out FOX Sports first year in boxing. All three judges scored the December 2018 bout for Tony Harrison. Even though the rounds were very competitive the judge’s saw Harrison landed a crisp jab and hard counter shots as he smartly kept his distance on Charlo. It did seem as though Jermell was looking for a knockout stoppage to the extent it cost him a few rounds at least. For the record this boxing nut did have Charlo winning a close 7-5 fight.

Back in June FOX had set aside a special Sunday night broadcast date for the rematch until news came that Tony Harrison had injured his ankle and would need surgery to repair it. As it turned out, Harrison didn’t get the surgery instead allowed it time to heal on its own with minor therapy. It could be that Harrison was wary of going under the knife like many boxers are when it comes to serious injuries. Of course Charlo thinks he wasn’t prepared and you know the FOX folks couldn’t have been to please finding out he hadn’t go through with the surgery. Unless you’re at home taking sides there’s no reason to believe Harrison was afraid but will never truly know what the deal was.

As far as what will be different in the rematch, it is an interesting question. For Harrison, he has to feel pretty good making it 12 full rounds for the first time in his career. In Tony’s two losses he was up on the scorecards in cruise control until being stopped later in fights against Willie Nelson and Jarrett Hurd. Also, Harrison should be confident he can do what he did the first fight and we’ve seen plenty of outside skilled boxers thrive in rematches. Harrison can repeat or possible improve the keys that got his hand raised in the first place.

Jermell on the other hand has to be thinking he can perform better in the second go round. Charlo is more of a guy who likes the action to take place in the center of the ring or have a fighter come to him so he can rely on his skill set. When Charlo is in chase mode he hasn’t been the same high-level 154-pounder. Case in point came about 3 and ½ years ago when Charlo struggled mightily trying to cut the ring off on John Jackson. Down on the cards Charlo would rise to the occasion and knock Jackson out. Since that fight Charlo went on to knockout Charles Hatley and Erickson Lubin. Between his brother Mall and him, they went on a KO spree that built a hardcore following on boxing twitter.

I bring up these examples of recent fights because it seemed clear as day that Jermell was looking for one-punch at a time. Against a longer and lankier Harrison that’s not a wise game plan. Tony has a great jab and posses more power than most assume. Harrison timed Charlo in spots and was able to land clean shots the judges picked up on. In the rematch Charlo will have to up his punch rate behind his own solid jab and throw in combination. A body attack would help as well to slow down an athletic boxer in Harrison. When Charlo does make it to the inside, Tony will have to make him respect his power as long as he doesn’t get caught up trying to make a statement or out of anger from the beef that’s been simmering for a year.

Per usual look for the outside boxer from Detroit to collect a few early rounds as Charlo tries to slow him down some. This is close to a 50-50 on paper lending itself to both men having a great shot at victory. Given the fact this podcaster saw Charlo inching out the win a more focused Jermell should be able to win the second one by a clear enough margin. Charlo will be throwing punches to the body and head while closing the gap in search of a major land that hurts Harrison. Expect lots of two-way action but in a skilled fashion likely not just a bombs-away affair. Charlo will clean up some offensive deficiencies to get the nod via decision or possibly late TKO stoppage.

My Official Prediction is Jermell Charlo by Majority-Decision. 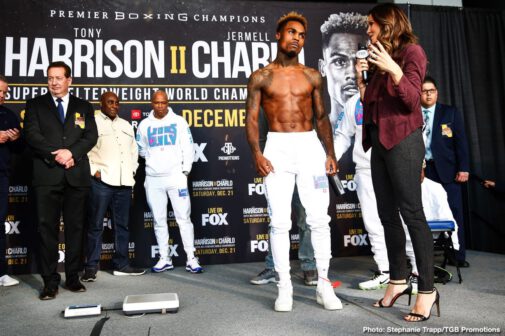 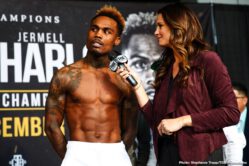 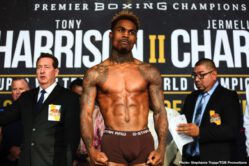 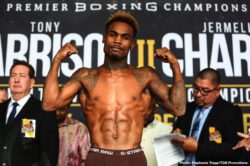 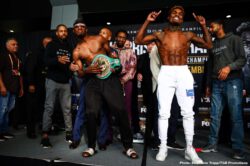 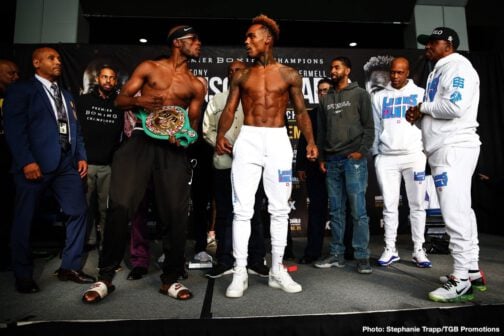 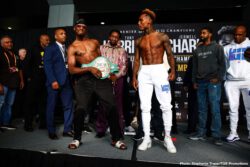 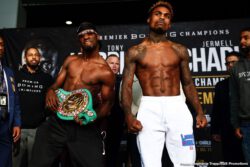 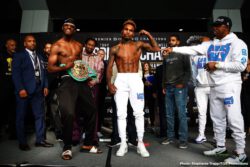 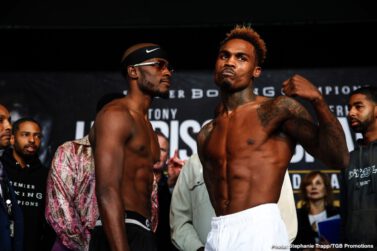 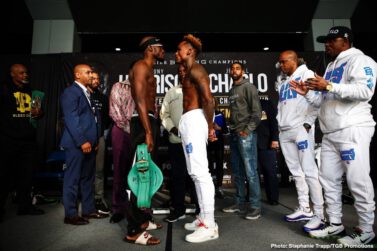 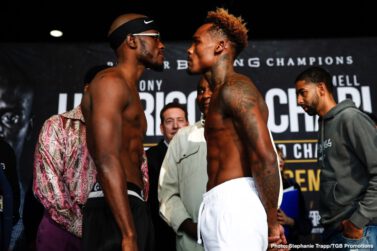 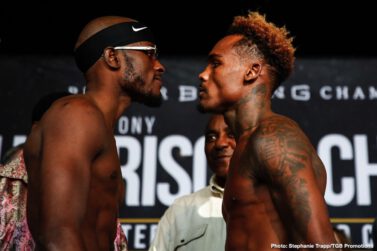