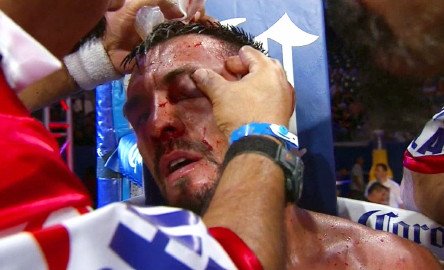 Former two – time world champion, Robert “The Ghost” Guerrero and Japan`s Yoshihiro Kamegai waged a potential fight of the year as both welterweight boxers went after each other for twelve nonstop, action – packed rounds in which Guerrero prevailed with the unanimous decision victory, 116-112 and two scorecards, 117-111, as he dictated the action by landing the crisper and more powerful punches throughout the bout.

This main event and its undercard fights were promoted by Golden Boy Promotions at the outdoor StubHub Center in Carson, California.

Both men attacked each other in the first round and they never stopped, giving fight fans their money`s worth. This bout featured 1,913 punches thrown, including over 1,000 power shots, 777 shots landed for a 40% connection ratio. Surprisingly, neither man was knockdown nor were they in any serious trouble.

Throughout this back and forth slugfest, Guerrero was the more effective puncher as he got the better of the close up exchanges, worked the body well and out landed and outworked Kamegai, including connecting on the majority of the power shots. Kamegai landed a hard right hook that opened up a significant cut on Guerrero`s left eye in the six round that bleed and quickly closed two rounds later. Kamegai was unable to capitalize on this turn of event and cause more damage to the cut. The Ghost was unfazed by his eye being swollen shut as he finished the bout strong, staggering Kamegai in the tenth and eleventh round and then poured it on in the twelfth, in an attempt to obtain a knockout.

Guerrero should`ve made the fight much easier for himself by boxing on the outside and used his jab, yet he seemed content exchanging with Kamegai in close encounters and fighting off the ropes. Guerrero improved to 32-2-1, 18KOs and ended the second longest layoff of his career, 13 months, in his first bout since losing to Floyd “Money” Mayweather. This victory put him back into contention for a significant fight in the near future in the extremely talented welterweight division. Kamegai dropped to 24-2-1, 21KOs and ended his two bout winning streak.

He demonstrated however, that he belongs in the ring with the best 147 pound fighters in the world.

Vasyl Lomachenko, the two – time Olympian Gold Medalist made boxing history as tied the record set by Thailand`s Saensak Muangsurian, for winning a world title in only his third bout, as he defeated Gary Russell, Jr. and gained the vacant World Boxing Organization`s Featherweight Title. Lomachenko upped his record to 2-1, 1KO, following his lost to Orlando Salido, who lost the title for coming into their fight overweight. Russell, Jr. suffered his professional loss and fell to 24-1, 14KOs. He lost for the first time in six years.

Lomachenko controlled the first four rounds and in the fifth he rocked Russell, Jr. Russell, Jr. did much better in the middle rounds as he was more assertive and effectively landed his punches, but his offensively output diminished sharply as the bout progressed. Russell, moreover, started rounds off really well but then faded in the last two minutes and allowed any momentum he had to dissipate. Lomachenko dominate the bout in the late rounds, landing 53% of his power shot and landed 100 more punches in the contest. He caused Russell`s left eye to swell up in the tenth round and he staggered him several times in the final two rounds, helping him obtain the majority decision with two scorecards of 116-112 and one scorecard was 114-114, in a fight that was not as close as that scorecard indicated.

The Ukraine native aggressively pushed the pace, landed the sharper combinations, especially to the body, connected on the majority of the power shots and displayed great defense that blocked 90% of the punches that Russell threw. Both of these very experienced former amateur standouts who`ve more than 700 combined fights between them and whom are extremely gifted and technically sounded 26 year olds, will be doing great things in boxing in the future, especially Lomachenko.

Devon “The Great” Alexander looked extremely good against Jesus Soto Karass in their super welterweight bout, as he displayed incredible hand speed that was too much for the tough veteran and allowed him to land at will. Alexander’s jabs, combinations and great foot and lateral movement prevented Karass from cutting off the ring and brawling with him, which he needed to do in order to have an opportunity to win this fight. Alexander had Karass in a great deal of trouble in the fourth round from a powerful right hook. Karass had more success in the middle rounds of the bout when he switched to a southpaw stance, but Alexander quickly adjusted and continued to control this bout.

Alexander obtained the unanimous decision by one scorecard, 97-93 and two scorecards, 99-91. Alexander improved to 26-2, 14KOs and rebounded from his loss to Shawn Porter last year. He put on one of his best offensive performances of his career and positioned himself for another world title matchup. Karass fell to 28-10-3, 18KOs and lost for the third time in his last five outings.

Former light heavyweight champion “Bad Chad” Dawson impressively returned to the ring after being out of the sport for the last year, made quick work of George “Honey Boy” Blades as he garnered a first round knockout at 2:35. He scored two knockdowns in the round. Dawson upped his record to 32-3, 18KOs while Blades dropped to 23-6, 16KOs. Dawson will fight two more times in 2014 in order to shake off the ring rust and then look for a significant bout in 2015.