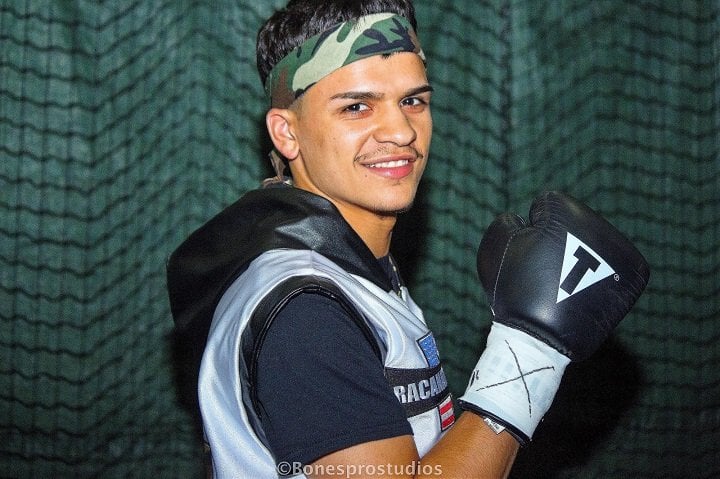 “Training camp has gone extremely well for this fight and I am in the best shape of my life,” said Gonzalez. “I do not know too much about Lopez, other than he is a tough, hard hitting boxer who comes to fight; however, I am extremely confident that I will prevail by a late round knockout.”

“New England’s Future 3” boxing card is promoted by Rivera Promotions Entertainment at the DCU Center (Exhibition Hall) in Worcester, Massachusetts. This will be Gonzalez’s second bout in front of his hometown fans, in what is expected to be a sold-out show.

“It is going to be an amazing atmosphere to be fighting in front of my fans as they cheer me on through the bout, and to have an opportunity to win my first title in front of them, will make this bout even more special,” said Gonzalez.

The twenty-one-year-old powerful, aggressive orthodox boxer is considered one of the best up-and-coming prospects in New England, and so far, he has lived up to this lofty expectation. All six of his bouts have ended by a technical knockout, four in the first round, and two in the second.

His professional career has gotten off to a great start, in large part due to his tremendous power that he displays in both of his hands, which is helped by his five foot, nine inch muscular frame, which is extremely tall for the super featherweight division. Gonzalez also displays an accurate jab, great work rate to the body, and underrated defense and speed. He can box as either a southpaw or orthodox and can switch from one fighting stance to another at a moment’s notice, which causes a great deal of confusion for his opponents. Now, in just his seventh bout, he will take his boxing skills to the next level, in his first eight-round bout against his most difficult opponent of his young professional career, with a belt on the line.

As Gonzalez takes a step-up in competition next weekend, he can impart the invaluable experience that he gained while he served as a sparring partner for the two-time Olympic gold medal winner and undefeated WBA and IBO super bantamweight world champion Guillermo Rigondeaux, earlier this year. He was supposed to be there for a six-week training camp that ended after three weeks when Rigondeaux’s bout with Moises Flores got cancelled.

“It was an amazing experience to be in camp and sparring with one of the best fighters in the world,” said Gonzalez. “In the short period of time that I was there, I learned so much. He taught me how to properly take care of my body while I am in and out of the ring and how to eat a more nutritious and healthier diet. I also improved my southpaw stance, as well as other boxing techniques. Overall, he greatly improved various aspects of my fight game, which will pay dividends for me in the future.”

Gonzalez’s early success at the professional level is not entirely surprising considering his stellar amateur career. He boxed in approximately a hundred bouts, winning eighty-five of them. He won the 2015 New England Golden Gloves champion and made it to the quarterfinals of the National Golden Gloves and the United States Nationals in 2014 and 2015. His amateur career culminated in him reaching the quarterfinals of the United States Olympic Trials in December of 2015. Gonzalez was eliminated from the Olympic Trials, not by losing a fight, but rather from the scale, as he was unable to lose four ounces after several attempts.

“During the Olympics trials, it was a brutal struggle for me to cut weight every day and fight at 123-pounds, when I usually box at 126 and walk around at 131,” said Gonzalez. “I was starving myself during the trials and at the quarterfinals, my body was unable to lose any more weight, no matter what I did.”

After not making the United States Olympic team, he decided to turn pro, instead of waiting another four years to make a second run at Olympic glory, especially since his fighting style was more suitable for the professional level than for the amateurs.

Gonzalez’s boxing journey began eleven years ago at the Worcester Boys & Girls Club, as he followed in his father’s (Irvin Gonzalez, Sr.) footsteps as an amateur fighter, who had a brief professional career. Gonzalez trains and serves as a personal instructor at the New England Boxing Academy, which he co-runs with his father, who is his trainer.

“My dad taught me that you need to have an extremely hard worth ethic and a very strong dedication to boxing in order to succeed in this sport,” said Gonzalez. “You can have all the skills in the world, but if you do not work hard and stay focused every day, then you are never going to live up to your full potential. This is why I am always in the gym, constantly trying to get better each and every day.”

For more information and the latest updates on Gonzalez’s upcoming bouts and his path toward a super featherweight world title, friend him on Facebook at Irvin-Gonzalez-boxing-page.