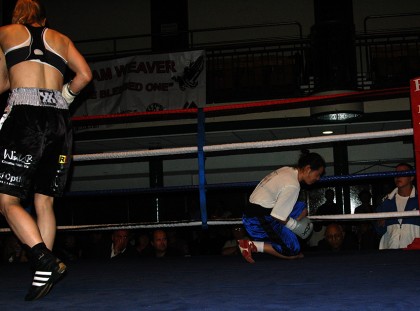 Right from the restart Marianne went back to throwing stiff jabs, forcing Katalina to adopt a high guard, which played right into the South Londoner’s hands, who first shoots out a solid right hand jab, quickly followed by a left cross to the body, which was enough to send Katalina back to the canvas, this time though she failed to make the count.

The first round knockout was officially timed at just sixty seven seconds, Marianne’s record now stands at two fights, two wins, both by first round stoppage.

Earlier today Marianne spoke briefly of the fight, as well as hinting at a possible title shot later this year.

“I don’t really know what to say about it actually.

I’m sure there’s going to be some point, somewhere in my career, where I’m going to dream about having fights as easy as that, but right now I would rather have a little more of a challenge, so people can see what I can do.

I don’t think either of us had a particularly good night that night, she had to travel three hundred kilometers from where she lived to get to the airport in the morning.

Yeah, I’m happy to get another win under my belt as there’s a possible title fight coming up later this year.

I have been told I am due to fight for the WBF Super Bantamweight International title, it was supposed to be on November 30th at York Hall, but with the big Frank Warren show at the Copper Box on the same day, this may now be changed to a later date.

Obviously if it does go ahead in November or December, I’m going to have to get my rounds in during sparring, although I had hoped to get to do more rounds in the fight

Karina Kopinska, the girl I’ll be fighting is number one in Poland. I’m assuming she’s going to be a little tougher, so I’m going to have to make sure I’m a lot tougher.

I can’t thank my coach Brian O’Shaughnessy and sparring partner Ian Napa enough, they really put me through my paces to prepare for the fight and I know they’ll have me even more prepared, as well a teach me some new tricks, for my next fight.

I’d like to say a big thank you to my sponsors BoxFit, Optimax, Winkball and TRAD TKO Gym, for their incredible support, sorry you didn’t get much ring exposure as it was another short one.

I’d also like to say a big, big thank you to all those wonderful people that turned out to support me, I was really so taken aback by the level of support I now have, there was even a group of Arsenal supporters that came along to support me, a fellow Gooner.

I really can’t thank every single one of you enough for the wonderful support you showed me on Friday night, it was so special, thank you.

Hopefully see you all again when I next fight.”