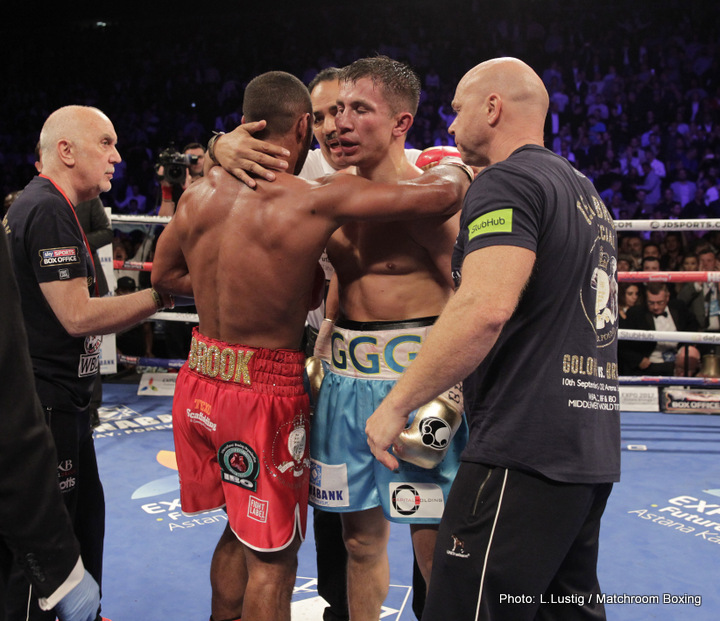 Saturday night was one of those rare occasions where boxing fans could feel some gratification in their love for the sport. It was an evening long etched into the diaries of boxing fans, ever since July with the huge announcement that Gennady ‘GGG’ Golovkin was to visit the UK to defend his middleweight titles against IBF welterweight champ Kell Brook. So often in these cases, the action never quite matches the hype, thankfully on Saturday night, it did. Here, we discuss the fallout from the main event, and potential next steps for both men.

Gennady Golovkin: In stopping Brook in the 5th round, GGG made it 23 consecutive victories via stoppage, but in doing so he showed some chinks in his armour. The usually cerebral Golovkin came out fast and rocked the challenger early in the first round. However his lack of patience and total lack of head movement left him open to Brook’s fast combinations and by the end of the first round Brook was having notable success. Brook was able to land repeated combinations to the head throughout the opening 4 rounds and at times made Golovkin look clumsy as he waded forward impatiently. Golovkin’s power saw him through though, breaking Brook’s eye socket, which eventually led to Brook’s corner throwing in the towel as he struggled to keep Golovkin at bay.

Ironically, the flaws shown in this fight by GGG could do him some favours. Potential opponents will have been encouraged at how much Brook’s hand speed troubled GGG, and at how he was able to frustrate him. This will hopefully lead to some big fights for the man considered by many to be the best P4P fighter in the world.

The fight Golovkin and every fan wants next is with Saul ‘Canelo’ Alvarez, however that looks unlikely to happen until around this time next year, if at all. Canelo’s promoters Golden Boy have been unwilling to risk their prize asset up until now, instead pitting him against WBO light middleweight champion Liam Smith this coming weekend.

Golovkin’s promoter Tom Loeffler has suggested WBA ‘regular’ champion Daniel Jacobs will be next. Jacobs has been made mandatory to Golovkin’s WBA ‘super’ title, as the organisation looks to unify their belts. Whether Jacobs accepts is another matter, considering he also recently suggested he would rather wait until next year for the fight.

Another option for GGG is WBO champion Billy Joe Saunders, who wasted no time in calling Golovkin out following his stoppage of Brook. Negotiations between the two sides took place earlier in the year, although Saunders pay demands at the time were thought to be too high. A win over Saunders would leave Golovkin with all the middleweight belts, meaning there would be no other routes to world titles in the middleweight division. Coupled with the vulnerabilities he showed on Saturday, that could lead to him finally getting the fights he craves.

Finally there is Chris Eubank Jr, the man who was expected to be facing Golovkin until negotiations broke down and Brook stepped into the breach. Eubank and his father Chris Eubank Sr have called out Golovkin at every opportunity, but it remains to be seen just how serious they are about making the match, with Eddie Hearn suggesting their demands for the fight were bordering on the ridiculous.

Kell Brook: Despite losing his unbeaten record, Brook’s stock is possibly higher than it has ever been. In stepping up 2 weight classes to face possibly the most avoided fighter in boxing, Brook proved that he is willing to take risks and face the very best.

After the fight Brook suggested his future lies in the light middleweight division, which rules out a defence of his welterweight title against mandatory challenger Errol Spence Jr. The 154 pound division is a difficult one at the moment, the potential opponents are high in quality, but mostly low in profile. The likes of Demetrius Andrade and the Charlo twins are unlikely to generate the sort of interest that Golovkin did, whilst being extremely difficult fights.

One man who could provide the same level of interest in Canelo himself. Could Brook steal the fight from under Golovkin’s nose? Canelo of course has Liam Smith to get past first, and Brook has expressed a desire to fight the winner of their bout. Should Smith emerge victorious, there will be promotional issues to overcome in making the fight happen. Whether Smith’s promoter Frank Warren will manage to come to a deal with Eddie Hearn is doubtful.

With Brook expressing a desire to only be involved in the biggest fights possible now, Miguel Cotto will surely be on his radar. Cotto has not fought since a points loss to Canelo last November but is scheduled to make a comeback later this year. Should he be successful, a fight with Brook would surely be one to please fans and television networks alike. Cotto is in the twilight of his career however, and may see Brook as too much of a risk at this point, unless the promoters can generate some big money to tempt him.

After coming off of surgery on his fractured eye socket Brook could be forgiven for easing in to the division. Yoshihiro Kamegai could be a good comeback option having scored himself a KO victory over Jesus Soto Karass on Saturday night. Kamegai is rugged and strong, but slow on his feet and slightly one dimensional. If after surgery Brook is looking for a testing but ultimately winnable comeback fight against a tough and durable opponent, Kamegai could be perfect. Having been paid around $30k for the Soto Karass fight, it shouldn’t be too difficult to tempt him over to the UK either.

Whoever these two superstars face next is sure to be of great interest to boxing fans. Both men are genuine world class fighters and willing to test themselves against the very best. Let’s hope they get the fights their talents deserve.