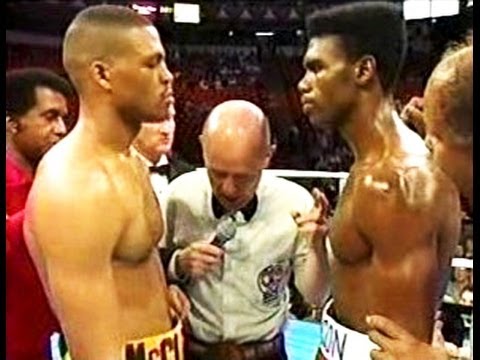 Some people will never, ever forget the great Gerald McClellan, or his incredible displays of boxing brilliance, savagery and bravery. The former world middleweight king was, as fans know, permanently injured in his epic and brutal battle with British warrior Nigel Benn – the February 25, 1995 fight producing an indelible piece of modern day boxing history.

McClellan bared his very soul in the ring that night in London, as did his conqueror Benn. Neither man was ever the same again. The sport these two fearless protagonists elevated shared the same fate, it could be argued. Today, Benn is busy devoting his life towards further spreading the word of God, living as Nigel does in Australia. As for Gerald, he still lives with his sister, Lisa, in their modest home in his home town of Freeport, Illinois.

Next week, February 19 (Monday), the mayor of Freeport, Jodi Miller, will bestow upon the former Kronk fighter the distinction of having the entire day named after him: “Gerald McClellan Day.”

If ever a warrior, a fallen warrior, deserved such an honour, it is “The G-Man,” Gerald McClellan, the man who ruled the middleweight division from May of 1993 (with his stunning KO win over the great Julian Jackson) to February of 1995, and his date with destiny with Benn.

True fans – those whose care for a fighter extends far beyond the sound of the final bell – will always remember and appreciate McClellan and his superhuman efforts (had Gerald been a quitter, he would not be almost blind, deaf and reliant on the aid of his sister and a wheelchair today). And it’s heartening to know how a politician with an arsenal of duties and commitments can take the time to remember.

Let’s all hope Gerald can enjoy next Monday – a big day that will be devoted to him, to his contribution to the toughest sport there is, and to all those people who care for him and about him; Lisa, his ever-devoting sister, being at the very top of such a list.

(Fans of McClellan will also be interested to know there will be, on February 25 of this year, the release of a new book: ‘After The Bell’ – The Gerald McClellan Story.)