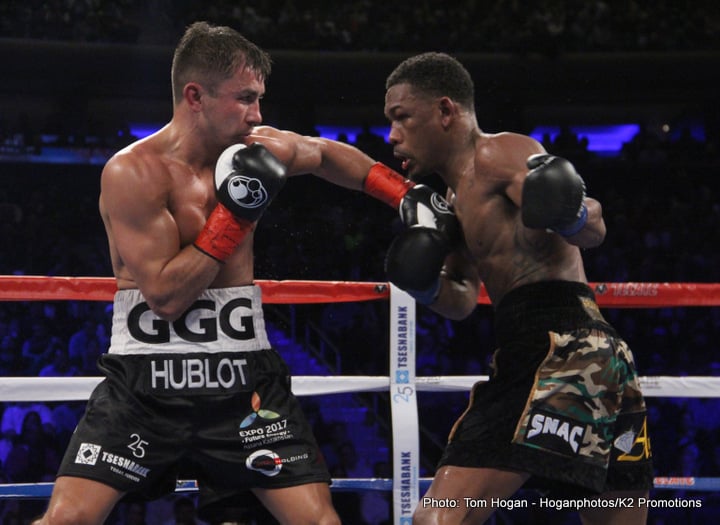 IBF/WBA/WBC middleweight champion Gennady Golovkin will be back inside the ring for the first time in eight months when he defends against 2004 U.S Olympian Vanes Martirosyan (36-3-1, 21 KOs) on May 5 on HBO at the StubHub Center in Carson, California.

Golovkin is getting a lot of criticism today for choosing to defend against Marirosyan, but it was Saul Canelo Alvarez that pulled out of the fight just four weeks before the contest. It’s not as if Golovkin planned all along to face Martirosyan. Golovkin wanted to fight Canelo, but his two positive tests for clenbuterol derailed it.

Golovkin has sold a lot of tickets for his fights in Southern California in the past in defending against Marco Antonio Rubio, Dominic Wade and Willie Monroe Jr. Those were all knockout wins for Triple G. As such, it was a no-brainer for Golovkin to go back to Southern California for his May 5th title defense once Saul Canelo Alvarez pulled out of their fight due to his two positive tests for clenbuterol, a performance enhancing substance.

While the Golovkin vs. Martirosyan fight isn’t the one the boxing public wanted to see, there weren’t a lot of great options for Team Golovkin to pick from. He may not be in the class of Canelo, but Martirosyan is still a very good replacement opponent for GGG. The other options for Golovkin – Sergiy Derevyanchenko and Demetrius Andrade – weren’t ideal due to the short amount of preparation time to get ready for them. Up until two weeks ago, Golovkin was scheduled to fight Canelo on May 5. The Mexican fighter pulled out out of the contest after testing positive twice for clenbuterol. Golovkin’s promoter Tom Loeffler wasn’t going to put him in a position where he would have to face southpaw Andrade or the highly skilled Derevyanchenko on 3 weeks’ notice.

Golovkin-Martirosyan will be televised on regular HBO. This will NOT be on PPV for obvious reasons. Martirosyan is not a big enough name for Golovkin to fight on HBO PPV. Martirosyan, 31, is a good opposition, but he’s been out of the ring for 23 months, and he’s lost two out of his last three fights since 2015. However, one of the defeats, a 10 round unanimous decision loss to Jermell Charlo, was a fight that this writer had Martirosyan winning.

The only real loss Martirosyan has suffered in the last four years was his defeat at the hands of Erislandy Lara in May 2016. Martirosyan was also beaten five years ago by Demetrius Andrade by a 12 round split decision in November 2013.

“Vanes Martirosyan is now the most important fight of my career,” Golovkin said. He has my respect and I am training hard to defend my titles against him. I am happy to be back on HBO and fighting at StubHub Center because they have great boxing fans. I will give my fans another big drama show.”

Golovkin taking on Martirosyan means he valued staying busy more than trying to hold onto his IBF middleweight title, which could be stripped from him by the International Boxing Federation. They didn’t sanction this fight because of Martirosyan’s inactivity and his losses in 2 out of his last 3 fights. Martirosyan is not the ideal opponent to be challenging for a world title.

A victory for the 36-year-old Golovkin will tie him with Bernard Hopkins for 20 successful title defenses at middleweight. Golovkin wants to break that record soon. If Golovkin beats Martirosyan on May 5 and Canelo Alvarez in September, he’ll own that record.