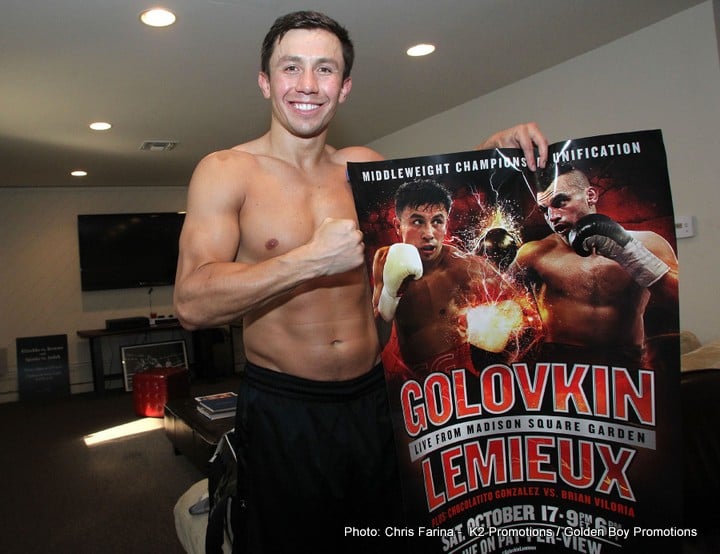 Ahead of his hotly anticipated Oct 17 middleweight unification with IBF champion David Lemieux, murderous punching WBA (sup) champion Gennady Golovkin, has stated it doesn’t matter what style is presented to him, he can beat them all.

Fans are expecting fireworks from the two massive punchers’ when they meet at Madison Square Garden on HBO PPV, with Golovkin stating that he believes he is the more complete fighter and will be able to adapt to the aggressive, swarming style of Lemieux, before gradually overcoming it.

“I think this fight is more technical for me, and maybe for him too,” Golovkin said. “This is going to be like a street fight. [Lemieux] has a good style – almost like amateur style. I will beat any style – amateur style or brawl style. He will be a good test for me.”

Lemieux captured the IBF strap in June in an action packed affair with Hassan N’Dam, and deserves credit for walking straight into a dangerous unification fight with one of the most avoided men currently in boxing. His team at Golden Boy are keen to see his star rise further still with a win over Golovkin, though “Triple-G” is intent on bringing the pre-fight underdog back down with a bump.

“It is very interesting for me because right now he [Lemieux] is a star. With power alone, he could go maybe three or four rounds with me. If he boxes he could go twelve rounds. Every second is very important – every round – every step.”

The victor can expect a further unification down the road with the winner of November’s Cotto/Canelo mega-fight, although current champion, Cotto, has shown little desire to face Golovkin until now. WBO titlist Andy Lee has expressed an interest, although he still has a commitment to defend his belt against mandatory challenger Billy Joe Saunders on a rescheduled date that was due to be announced Monday, before farcically, the announcement – like the fight twice before it – was postponed!

Either way Golovkin is clear that he wants to fight the best available at 160 although he refuses to dwell on the problems of being avoided.

Roy Jones On Mike Tyson: He's Known For More First-Round Fireworks Than Anybody, Other Than Maybe George Foreman
Follow @eastsideboxing