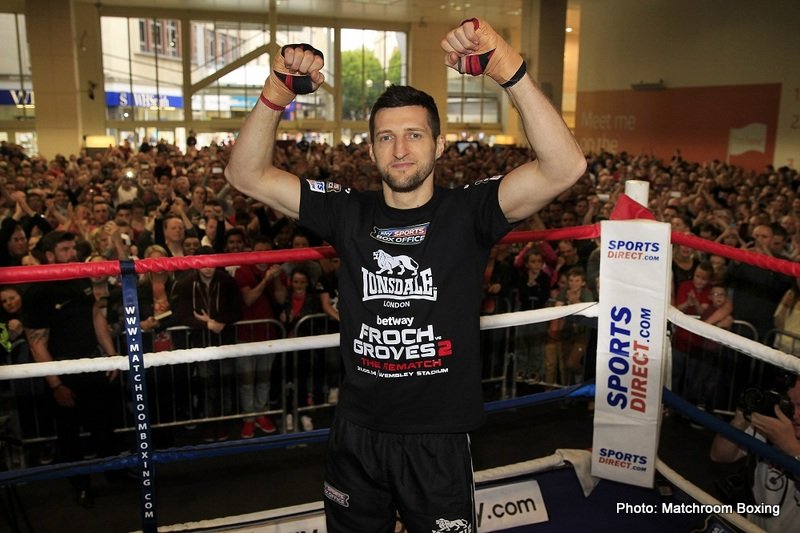 A number of months ago, George Groves promised James DeGale that he would fight him if he managed to defeat Andre Derrell in a fight for the vacant IBF Super-Middleweight title, something DeGale went on to do on May 23rd.

If Groves himself manages to gain the WBC Super-Middleweight belt from Badou Jack when he fights him on Saturday, the showdown between the two brits is bound to take place. However, four time world champion Carl Froch, who famously beat George Groves twice, does not rate either of the fighters.

In an exclusive interview with Lonsdale he said: “I think they’re both equally as poor as each other.

“I’ve never rated George Groves. He gave me a good fight in the first match because I wasn’t prepared, the rematch was easy. And James DeGale lost to George Groves…”

Despite Groves beating DeGale in the first fight between the two, Froch thinks that the latter will come away from the rematch victorious, and believes that he is one of the main reasons for that, he continued:

“How does the rematch go? I think because of what I’ve done to George Groves I’ve probably taken the sting out of his tail and DeGale is now confident after a weak performance from a poor Derrell, so he will probably edge the fight.”

When it comes to his personal favourite, Froch does not sway either way, but hopes for a good scrap where both fighters manage to do damage to each other, he told Lonsdale:

“Who would I want to win? I couldn’t care less. As long as they punch each other’s heads in for twelve rounds I’ll be smiling because they’ll both leave the ring bruised and battered, but like I said, I think James DeGale will win.”