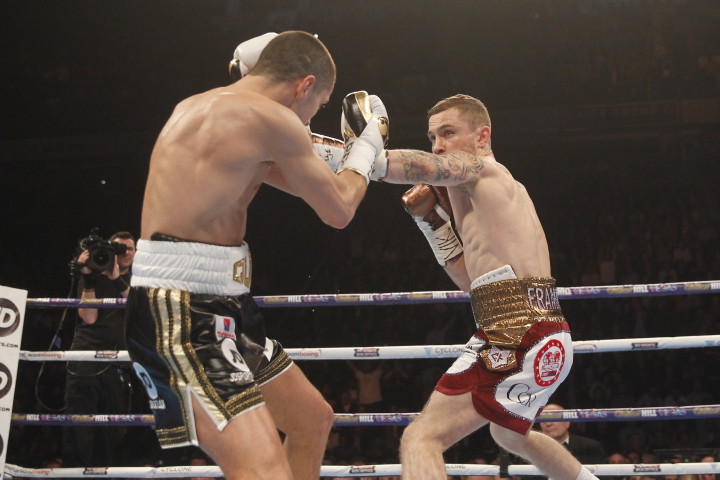 The long-awaited matchup of unbeaten champions got off to a slow and tactical start, but Belfast native Frampton (22-0, 14 KOs) established himself as the aggressor and worked his jab to pocket the early rounds. Quigg didn’t come alive until after the seventh, when trainer Joe Gallagher warned his charge that he was likely down big on the judges’ scorecards.

Quigg (31-1-2) pounded the body and was the aggressor in rounds eight through 11, but it was too little, too late for the Lancashire, England native. Frampton won the 12th and walked away the unified champion by scores of 115-113 for Quigg, but 116-112 twice for Frampton.

“I couldn’t believe it was a split,” Frampton said. “I don’t know what that lad was watching, but as long as I got my hand raised at the end of the fight, that’s the main thing.

“We have a great rivalry, and it was a great fight at the end. The start wasn’t great, but of course I would do it again. I’m happy to campaign at super bantamweight, but if a big fight comes calling at featherweight – Santa Cruz, Selby, any of these guys – I’m ready for them.”

Quigg admitted he should have pushed the action in the early rounds, but still thought he did enough to get the decision.