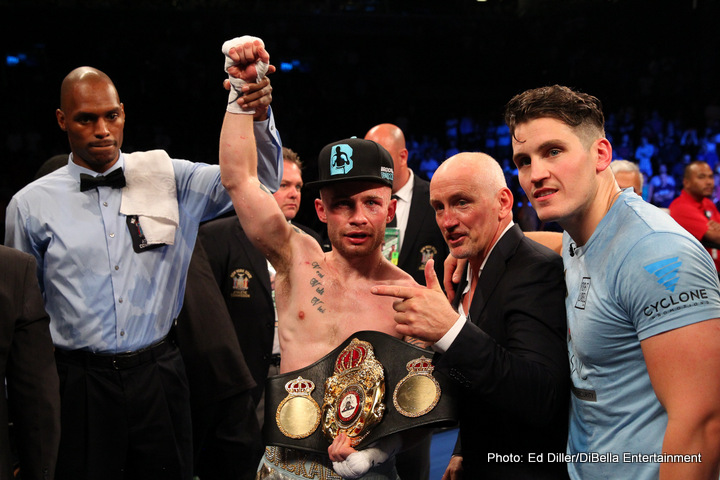 GOOD NEWS: Northern Irish boxing superstar Carl Frampton — the reigning WBA featherweight champ — says he loves Conor and would be down to train with the guy if he’s serious about boxing.

BAD NEWS: Frampton doesn’t think Conor’s got a shot in hell at taking down Floyd Mayweather.

We got Frampton out at Cafe Pinot in L.A. on Thursday — where the undefeated 23-0 bruiser gave some straight talk about Conor’s foray into boxing.

Frampton says he thinks Conor’s move to get a boxing license is almost like “sticking the fingers up to UFC … saying ‘I can do what I want.'”

But give Conor a year of proper training and Carl says the dude could be a real force to be reckoned with.

You know who would beat Conor McGregor’s a**?? Canelo Alvarez … this according to boxing legend Oscar De La Hoya.

The Golden Boy was leaving 1 OAK on the Sunset Strip when we asked for his thoughts on Conor getting a boxing license in California. He pulled no punches.

Oscar says Conor would get WRECKED by the red-headed pugilist — and extended an invitation to McGregor to see how a “real” legend fights … when Bernard Hopkins takes on Joe Smith later this month.

Legendary boxing promoter Bob Arum has some truth bombs for Conor McGregor — you’d get straight-up killed in the ring.

Arum — who’s promoted everyone from Muhammad Ali to Sugar Ray Leonard and Manny Pacquiao — says McGregor is delusional if he thinks he can compete with the best boxers in the business.

That being said … Arum says now that Conor has a license in California, he probably needs a boxing promoter — and Bob tells TMZ Sports he’s down to set up a meeting ASAP!

“I’d jump at the chance if Conor wanted to sign on … but I would warn him about the huge odds against him.”

So, how does he feel about potential Mayweather matchup?

“It’d be a joke. Floyd would take out McGregor whenever he wanted.”

Despite his new California boxing license, Floyd Mayweather still doesn’t believe Conor McGregor is serious about getting in the ring.

We spoke with Floyd this week … who says he thinks McGregor is all talk when it comes down to it.

Mayweather has previously told us he thinks Conor is piggybacking off his name to try and get even more famous … and it’s clear he still feels that way.

Conor was issued a boxing license in California, as first reported by MMA News scribe Ariel Helwani, and commission officials say they’re excited to see the UFC star try his hand at the sweet science.

This ain’t over … stay tuned.