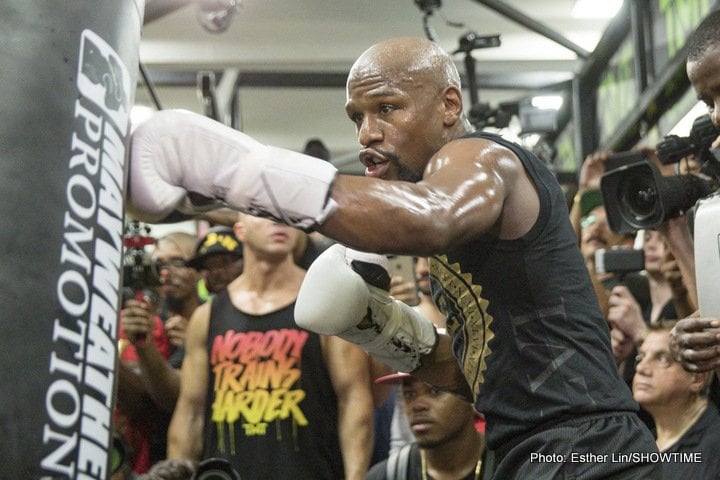 We pretty much know 40 year old Manny Pacquiao will fight again. The living legend looked good, arguably close to his best In years, when he picked up a wide decision over Adrien Broner in January and then picked up a closer points win over Keith Thurman last month to win yet another world title. But will Floyd Mayweather box again?

There has been more recent talk along these lines, due to how the 42 year old has been hitting the boxing gym and posting it on social media. Despite plenty of talk from those close to Floyd that says, nah, there will be no more fights; not with Pac Man or with anyone else, fans continue to convince themselves that Mayweather will indeed return – and that it will be against Pacquiao.

Right now, there two other fighters calling for a return fight with the new WBA welterweight champ: Jeff Horn and Thurman. Horn caused the big shock when he took a controversial decision over Manny in Oz a couple of summers ago, and he wants a second big fight with the all time great. Thurman, who initially seemed to accept his loss to Pacquiao, is now insisting be deserved a draw and is calling for the rematch.

In truth, the likelihood of seeing either of the three rematches – Pac-Floyd II, Pac-Horn II or Pac-Thurman II – is slim. But of these at least somewhat, maybe possible sequels, which would YOU prefer to see take place, which fight would you actually pay to see?

The Mayweather-Pacquiao fight was one big dud, totally and utterly bereft of action. Still, despite this, a sequel would sell big (go figure!). The Horn fight was exciting, as was the Thurman fight; so from this standpoint at least, a second slice of either match-up would not be the absolute worst idea in the world.

Pacquiao, if he had his choice, would take a Mayweather rematch as quickly as he can still throw a punch, but as usual Floyd will call the shots.

Is the 50-0 “TBE” merely keeping himself in shape and fighting off boredom, or do his two documented trips to the gym mean a whole lot more? And again, do YOU care ?

We all know neither Manny nor Floyd have anything at all left to prove, but this does not mean both men have hung the gloves up for good quite yet.

Email
WhatsApp
Tweet
Share
342 Shares
READ:
Julian Williams all set ahead of unified world title defense this Saturday in Philadelphia
Previous boxing news: Sugar Ray Seales Exclusive Interview: “I Whipped Hagler”
Next boxing news: Emanuel Navarrete vs. Francisco De Vaca undercard for Aug.17
You are here: Home / Boxing News / Floyd Mayweather Is Back Hitting It In The Gym: Is He Training For Pac Rematch? Do You Care?
Follow @boxingnews24