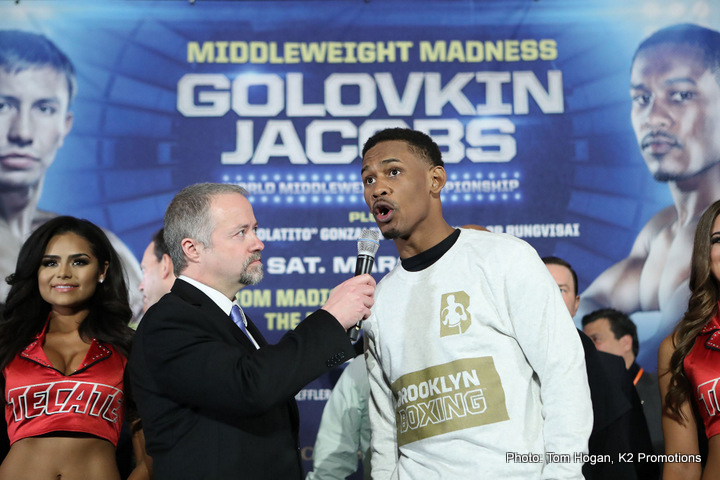 As fight fans know, top British promoter Eddie Hearn announced over the weekend, to some surprise, how he has signed up middleweight contender Danny Jacobs. Jacobs, 32-2(29) will now make his ring return on November 14, when he will face Luis Arias, 18-0(9) in Uniondale, New York.

And Hearn, who said whilst talking with K.O Artist Sports that Jacobs has a genuine superstar quality about him, has big plans for the former WBA champ who pushed Gennady Golovkin so close back in March (Hearn told K.O Artist Sports he had Jacobs winning the fight by a round).

Hearn says that after the November return, he wants to match “The Miracle Man” with Canadian power-puncher David Lemieux in the spring, then, providing he comes through that potential firefight okay, Jacobs will look to fight the winner of the anticipated GGG-Canelo rematch (targeted loosely for May).

“It’s an obvious rematch,” Hearn said of GGG-Jacobs II. “The Canelo fight is also there [for Jacobs]. I’m just excited to work with him, I have a lot of time for the guy. He’s a great fighter and a role model. Danny Jacobs has proved time and time again he’s willing to get in there with anyone.”

A Jacobs-Lemieux fight really is one to get excited about; as is any match-up that puts the seriously powerful Lemieux in with a top fighter. Jacobs can bang too, as we know, and this one – although it’s been said so many times ahead of an expected thriller only for the fight to inevitably fall short – could possibly wind up being a modern day Hagler-Hearns!

Lemieux, 38-3(33) craves another chance to become champion again, having held the IBF belt for a while, and a win over Jacobs would likely get him his shot. Jacobs might have a risky fight ahead of him in November, as Arias has that utter confidence any unbeaten fighter carries, but if the Brooklyn star looks good and has no problems in his return, that fight with Lemieux ccould be one of the hottest fights of 2018!