A genuine superstar of the sport, Canelo Alvarez has plenty of options right now. The Mexican star might go back up to 175 pounds, in search of yet more titles, he may stick around at 168 and defend one or more of the four belts he now holds, or there has even been talk of Canelo going up to cruiserweight.

Or Canelo could have a third and final fight with Gennady Golovkin.

Canelo, coming across as more than a little irritated at being asked about GGG yet again, Canelo did nevertheless recently say he is open to a third rumble with the man he is 1-0-1 with. But it would have to be up at 168 pounds. The question is, does the at his peak Canelo get the KO in a third fight with Golovkin up at super-middleweight?

Fight fans still have a genuine interest in seeing a third and final fight between these two genuine rivals, but would the older, naturally smaller, inactive man, have a genuine chance against Canelo in what would be Triple-G’s 168 pound debut?

Canelo, as he pointed out when speaking with ESPN about GGG, has been doing “special things while he (Golovkin) has done nothing since our second fight.” And Canelo said that BEFORE his history-making win over a corageous Caleb Plant. Canelo has been thrilling the fans and making history while Golovkin has been all but invisible.

Next up, in December in Japan, GGG will finally fight again, against action fighter Ryota Murata. Lose that one, or even look bad, and Golovkin will be seen by many as a sure loser to the younger, physically stronger and sharper Canelo. And under this scenario it is perhaps likely plenty of fans would be expecting to see Canelo get the KO or stoppage win.

That said, GGG has a genuinely great chin, indeed a rock for a head, and in the two previous battles with Canelo, fight-one especially, Golovkin’s beard took anything and everything that came its way. But at age 40 (in April), after such a long and at times hard career, up at a higher weight, would GGG be as solid, in terms of taking a head shot as well as a body shot?

Canelo is 31 years of age and perhaps at his absolute peak right now (can he actually get even better!). If these two bitter rivals do get it on in May, or maybe September of 2022, up at 168, Canelo will be the overall favorite by a big margin, there is no doubt. Canelo has shown plenty of improvement as a fighter since the two battles with GGG. Golovkin, however, is never going to be as good as he was back in 2017 or before then.

Still, it would be quite shocking to see Golovklin laid out on the canvas. Can Canelo do it and would YOU be surprised and shocked if he did flatten the iron-chinned middleweight great? 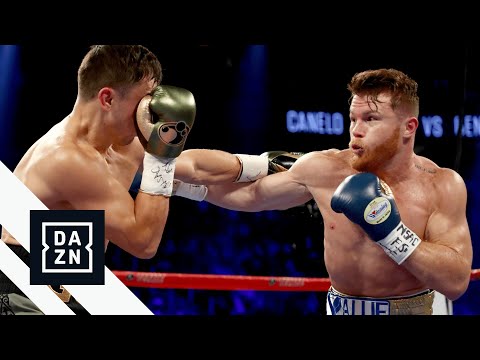 3 thoughts on “Does Canelo Knock Gennady Golovkin Out In A Third Fight If It’s At 168 Pounds?”