The period of time that is February 15, 1978 to June 27, 1988 birthed what we have come to know as the Lost Generation, a period of time in which many would-be heavyweight faces failed to live up to their potential and promise. It all started when the rookie with only seven (7) fights “Neon” Leon Spinks upset the faded “Greatest” Muhammad Ali to become the undisputed heavyweight champion of the world (Lineal, WBC, WBA).

Ali had already been pushing the bounds of his health and ability in the aftermath of “The Thrilla in Manila” and had finally bit off just a bit more than he could chew…on this night anyway. The Greatest would go on to regain his lost title in the rematch later that same year. Speaking of said rematch, politics transpired in the build to said bout that would see Leon Spinks end up as the last undisputed champion for a decade…a very long, tired decade. 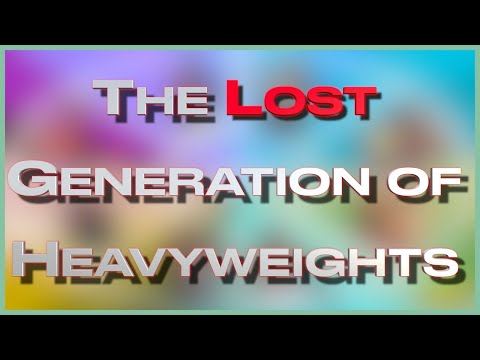 When Spinks beat Ali, he was slated to take on his WBC mandatory Ken Norton, but Spinks would elect to battle Ali again. In response, the World Boxing Council stripped him of their version of the title, splintering the crown for the first time since Muhammad Ali’s forced exile in 1967 (which would see a WBA tournament, of which history would also repeat itself, to be covered about a paragraph or so from this point). Ken Norton would be awarded the vacant WBC title on a retroactive recognition dating back to his late 1977 victory over Jimmy Young (an underrated 70s gem that some feel Young won). Norton would then go on to defend his long awaited crown against the “Big Black Cloud” Larry Holmes. In one of the standout great fights of the 1970s, Holmes would emerge after a close affair, making Norton the only heavyweight champion to never win a heavyweight title bout.

Ali would retire after becoming the first three (3) time heavyweight champion (after sitting on the belt for a while) and the World Boxing Association would host a four man tournament to crown their new king. “Big” John Tate would emerge the champion (over Leon Spinks, Gerrie Coetzee, and Kallie Knoetze) and go on to lose in his first title defense in a 15th round knockout at the hands of shocker Mike Weaver.

Tate’s loss in his first defense was merely the continuation of the curse (jinx, anyway?) spawned by “Neon” Leon when he lost in his first title defense. Sadly, it would continue well into the era (the WBA “hot potato as has been put) until the titles finally came back together in 1987. More on that specific event later.

The era would truly find infamy in its inability to find a successor to the one-of-a-kind ambassador of ambassadors, Muhammad Ali. The man who would go on to act as the only sort of stability the era could stake claim to, the “Easton Assassin” Larry Holmes, never managed to warm up to the people (nor them to him) for many reasons, chief among them being the shadow of Ali (and later both Rocky Marciano and Mike Tyson) that proved impossible to escape. It didn’t help that Larry had also thrashed everyone’s hero [Ali] in front of the world in a shameful 1980 bout.

Larry would later exchange the WBC title (he refused to fight Greg page because the money wasn’t right) for the International Boxing Federation’s newly created version of the heavyweight strap. In the fight that may have made it impossible to deny Holmes, he dropped a decision to light heavyweight step-up Michael “Jinx” Spinks. The bout wound up being historic for many more reasons as well, given it was the first time the light heavyweight champion had managed to beat the heavyweight champion and was 30 years to the night that Archie Moore had fallen short in doing so against Rocky Marciano.

This docuseries, turned documentary via supercut, covers all mentioned above and much more (I could honestly go on here, but who’s got time to read when you can watch?). The eight (8) part series is as follows:

1. The Greatest Shadow: covers the impossible-to-please reign of Larry Holmes and how he never got his just due (though time has been kinder to the legend)
2. Rise of the IBF & WBO: the birth of “alphabet soup” and how it stained the sport to this day
3. Don King’s Title Monopoly: how the “mastermind” stacked the cards with the splintered pieces of the heavyweight crown, dwindling interest in the sport over the long term
4. The Death of Prizefighting: the impact of the Mancini-Kim affair and how the revisions to the sport since may also prove to be its death
5. The Fab Five Kings Rivalries: how the lower weight classes, helmed by “Sugar” Ray Leonard, Roberto Durán, Wilfred Benítez, Thomas Hearns, and “Marvelous” Marvin Hagler carried the sport as the marquee class failed to live up to the Golden Age 1970s
6. HBO’s Heavyweight World Series: the overdue tournament to crown the first undisputed champion since “Neon” Leon Spinks (and to usher in the reign of Muhammad Ali’s inevitable successor in “Iron” Mike Tyson)
7. The Fates of the Fallen: a eulogy for the good names who could’ve been great, the roster of the Lost Generation
8. The Coming Silver Age 1990s: how the Lost Generation may not have been as bad as is said and opened the door to the (arguable) second best era for heavyweight boxing helmed by Lennox Lewis, Riddick Bowe, Evander Holyfield, and more in their quest to escape the eclipse imposed by the Baddest Man on the Planet [Tyson]

Much more in store in “The Lost Generation of Heavyweight Boxing”, written, produced, and narrated by TheCharlesJackson for The Boxing Encyclopedia; from my heart to yours.

Oh and, yes, “A Timeline of the 1980s Heavyweight Boxing Division” is currently in production. In other words, the more conventional timeline (covering every major fight in the 10 year span) as is the norm on BoxingPedia is still coming for the 1980s in order to properly fill the gap between the 1970s and 1990s timelines. Stay frosty and God Bless.