With the Fabulous Five carrying boxing, the heavyweights needed to get it in gear if they hoped to reclaim their throne! February 15, 1978, has gone down in history as a central nexus point for heavyweight boxing: the day the heavyweight championship was split and never to [fully] return to complete form and legitimacy.

Rookie Leon Spinks upset a “should-have-retired-after-insert-fight-here” Muhammad Ali and would go on to accept Ali’s request for a rematch as opposed to taking on mandatory Ken Norton. Norton had won a tough one over Jimmy Young to close 1977, earning him the shot. Spinks was stripped by the World Boxing Council and would go on to lose the World Boxing Association’s version of the heavyweight strap to “the Greatest” in their rematch. 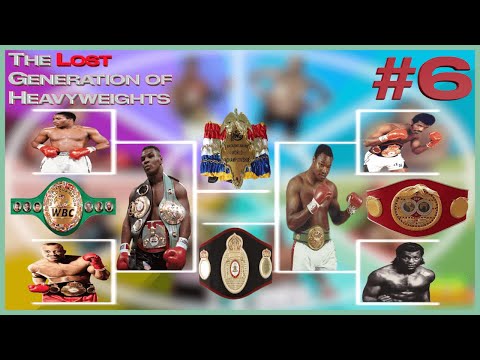 Meanwhile, Ken Norton was blessed with the WBC title and would immediately drop it in one of the 1970’s best title matches against the “Big Black Cloud”, Larry Holmes (making Norton the only champion to never win a title bout).

Holmes would go on to dominate the division, though never bringing together the fragmented title (did he really need to?). Ali would retire after beating Spinks, but return for an ill-fated title bout against Larry Holmes where he was thrashed (sparking a flame in a young heavyweight who would avenge his hero 8 years later in a bout billed as “Heavyweight History”).

Along the way, Holmes swapped the WBC title for the newly created International Boxing Federation’s version of the heavyweight championship. Eventually, Holmes would be upset by the younger brother of Leon Spinks (Holmes had also thrashed Leon in 1981), Michael “Jinx” Spinks, in 1985, ending any chances the “Easton Assassin” had in tying Rocky Marciano’s 49-0 record.

Said bout was historically significant for many reasons, of which include a light heavyweight champion beating the heavyweight champion and it being the 30-year anniversary of Rocky Marciano foiling Archie Moore’s like-minded attempt. They rematched and Spinks proved he was no fluke (depending on who you ask).

Speaking of said rematch, it was the second “inning” in the HBO Heavyweight World Series, a unification tournament brought about by Don King’s recognition of the obvious: there needs to be ONE heavyweight champion, and people are losing interest in the shenanigans. The tournament was conceived with the express purpose of bringing the WBC, WBA, and IBF titles under the umbrella of the would-be successor to Muhammad Ali. The title-holders, at the time, were Pinklon Thomas (WBC), Tony Tubbs (WBA), and Michael Spinks (Lineal, RING, IBF); maybe one of the three champions would emerge as undisputed? Logically, the hope was that “Kid Dynamite,” who’d been lighting up the scene with his bedazzling knockout power and speed, would be the chosen one, but we’re getting ahead of ourselves.

The big shabang was announced in the build to the WBA title bout between champion Tony “TNT” Tubbs and challenger “Terrible” Tim WItherspoon, the winner obviously going on to compete in the bracket. The tournament would go on to host such bouts as “VINDICATION IN VEGAS” (Spinks-Holmes II), “JUDGMENT DAY” (Berbick-Tyson), “HARD ROAD TO GLORY” (TUCKER-DOUGLAS/TYSON-THOMAS), “THE ULTIMATE” (Tyson-Tucker), and many more worthy of a viewing. Also included are bonus bouts that I saw fit, being they were directly associated with the narrative(s) surrounding the tournament.

Whether you’re well acquainted with the era or not, whether you know who the winner of this tournament is or not (I’m sure everyone here knows), enjoy this retrospective look back in time at the 1980s HBO Heavyweight World Series, featuring the talents and exploits of Larry Holmes, Tim Witherspoon, Michael Spinks, Tony Tucker, Mike Tyson, and many more warriors while, also, acting as the passing of the torch, finally, into a new, prosperous era that would continue into the Silver Age of Heavyweights known as the 1990s.

Enjoy the journey of the BIG 3 era titles coming together for the first time, as narrated by TheCharlesJackson for the Boxing Encyclopedia; part 6 of the ongoing Lost Generation docuseries for BoxingPedia. Written, produced, and narrated by TCJ; from my heart to yours.