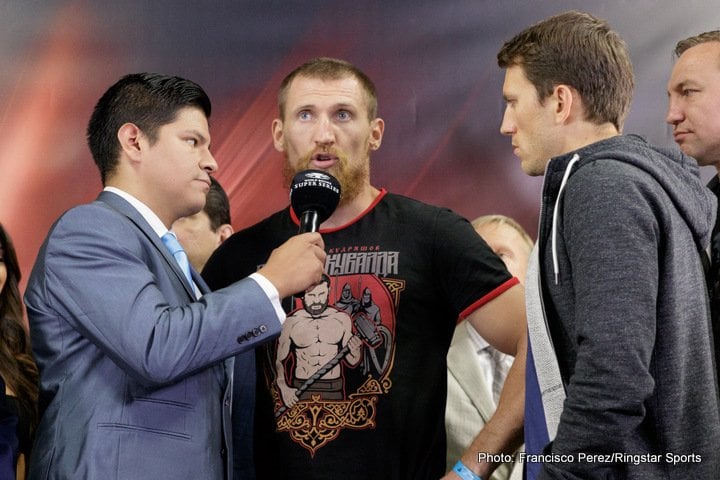 Rest assured this one will be extremely violent.

Russian warriors Dmitry Kudryashov and Evgeny Romanov will collide on May 21, the two bangers to fight in Khimki, near Moscow. At stake, along with Kudryashov’s career, will be the WBC silver strap at bridgerweight; this the fledgling weight class that has recently sprung into life. You might choose to ignore the belt that will be on the line (and you may well choose to ignore the bridgerweight division itself, where fighters from 200 to 224 pounds will compete), but Kudryashov Vs. Romanov will be a very real fight.

Fans who have seen bearded cruiserweight banger Kudryashov in action know all about him – how the 35 year old has lethal punching power but also a leaky defence and a less than granite chin. Kudryashov, who has a ton of heart, has given us at least two classic slugfests, and he may well feature in another thrilling rumble in May. But can Kudryashov, who has not fought since being generously awarded the decision in his war with Vaclav Pejsar in December of 2019, get the win over Romanov?

Romanov, also 35, is unbeaten, at 15-0(11), but unlike Kudryashov, he will be moving down in weight for the bridgerweight bout. An amateur standout, Romanov left it quite late in turning pro, waiting until July of 2016, when aged 31. Romanov was last in action in November of last year, when he was seen taking out former WBO heavyweight champ Siarhei Liakhovich in a round.

Again, both Kudryashov and Romanov can punch, both men have a fan-friendly style and approach, and there is no way on God’s green earth that this fight goes the distance. Kudryashov, 24-3(23) has been given a chance to give his career a major boost (in his two biggest fights to date, he was stopped in a couple of rounds by Yunier Dorticos and then in five rounds by current WBC cruiserweight champ Ilunga Makabu). While Romanov will, in squaring off with Kudryashov, be facing the most dangerous opponent of his pro career.

One piece of advice ahead of this one – don’t blink!