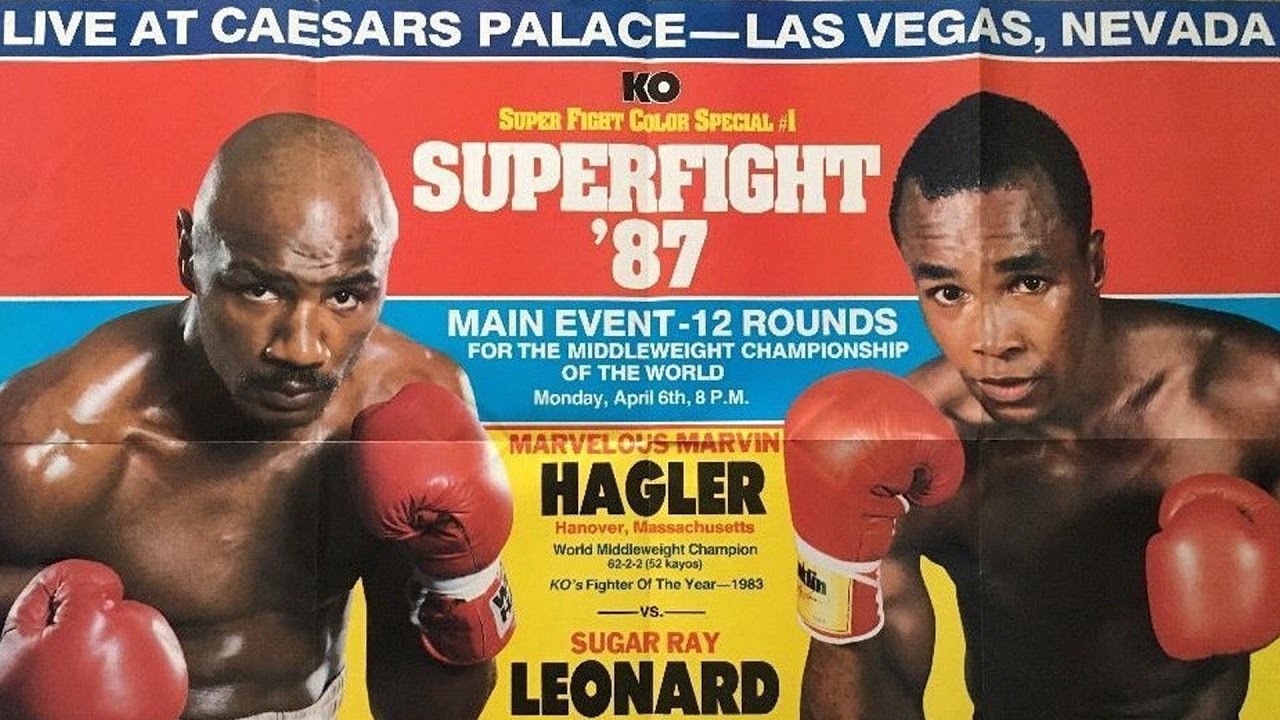 Each and every year at this time – April, 6 – fight fans from all over the world engage in the ritual of re-watching the Sugar Ray Leonard-Marvelous Marvin Hagler fight. THE most argued over decision in boxing history, the 12 round split decision that went Leonard’s way will never, ever be accepted by everyone as the correct result, the fair result that should have been handed over inside Caesars Palace in Las Vegas 34 years ago.

But this year it’s different. This is the first time since the re-watching ritual began that it has taken place with one of the two great fighters no longer with us. As we are still saddened over the death of Marvelous Marvin (and don’t you catch yourself, every now and then, having to remind yourself, for a split second or so, that the great middleweight king is no longer with us?), there will be an even greater mixture of emotions felt by boxing fans when they give the 1987 epic yet another viewing. I dare say many fight fans will feel an innate desire, a need, to score the fight for Marvin this time; even Sugar Ray fans.

Over the years, the decades, this fight has grown and grown like no other in terms of dividing opinions on who really deserved the win. Sure, there have been controversial decision before, and since. But Leonard-Hagler is different. No fight comes close in terms of being able to start a passionate argument.

As we know, Leonard, a massive underdog going into the fight, was not only given no shot to win but his health was feared for. Of a poll of 50 experts asked who would win the fight just four picked the former welterweight champion who was having his first fight in almost three years and his first-ever fight as a middleweight (interestingly, Thomas Hearns was one of the very few who picked Leonard to pull it off).

As we also know, Leonard won by a score of 115-113, this the same score Hagler was awarded the decision victory by, with Leonard also being handed a crazy tally of 118-110. Judge Jo Jo Guerra later admitted he’d fouled up, that he should have awarded Hagler with two additional rounds; but even a 116-112 score would have been far too wide in this fight. Everyone agrees the Leonard-Hagler fight was close, as in as close as your next breath (to borrow a line from a great 1940s boxing writer).

So all these years later, who do you think won? And has your opinion changed with the sad passing of Marvelous Marvin? The fight meant so much to Hagler, and in so many ways the great man never got over the loss. To his dying day, Hagler insisted Leonard told him in the ring that he lost the fight. Leonard has said that he never said so, and that even if he had felt he had lost, he would not have told Hagler.

Plenty of people feel a draw would have been the fairest decision, that neither man truly mastered the other that glitzy night in Vegas. Maybe. Others still insist Hagler was flat-out robbed. Others still insist Leonard’s brilliant, nervy and flashy performance was enough for him to have walked away with Hagler’s belt.

Perhaps Richard Steele, who was the third man that night, says it best when he says the fight, “gets closer and closer every time I watch it.”

How will YOU score Leonard-Hagler today?

How some unofficial experts had it: