Diaz had Haney hurt in the 12th, but let him off the hook after gassing out in the second part of the round. 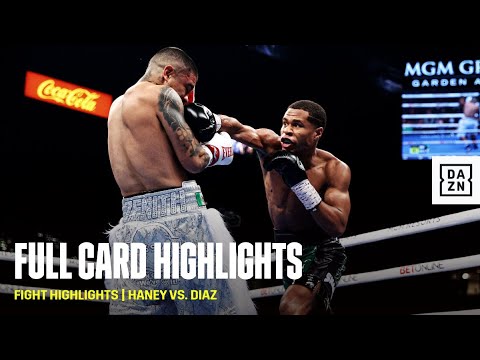 Haney, 23, outworked a Diaz and took advantage of the former 130-lb champion’s inability to throw a lot of shots. Diaz had said before the contest that he would average over 120 punches per round, but he didn’t throw anywhere near that level.

Jorge Linares did a far better job against Haney than Diaz due to his superior hand speed, power, and his ability to throw a lot of shots. Diaz Jr. was missing in all those areas tonight.

Undercard results of the action below:

Light welterweight contender Montana Love (17-0-1, 9 KOs) had his coming out party with a sensational third round knockout win over Carlos Diaz (29-2, 14 KOs0 in the chief support bout. Love, 26, knocked Diaz down three times in the second round.

At the start of the third round, Love was hitting Diaz with repeated shots to the head and the referee Raul Caiz Jr. decided he’d seen enough and pulled the plug on the fight. The time of the stoppage was at 1:22 of the third.

In the second round, Love dropped Diaz repeatedly with left-right counter shots. Diaz was plodding forward with his head down, making it easy for Love to catch him with his powerful left uppercuts.

After the fight, Love talked of big fights that he sees happening in 2022.

As of now, Love is ranked #12 IBF at 140. It’s unlikely that he’ll get a title shot next year unless the undisputed champion Josh Taylor wants to give him a voluntary defense, but that’s probably not going to happen due to network and promotional issues.

If Love continues to miss weight at 140, he’ll need to move up to 147, and it’s unclear whether his skills and power will be enough for him to beat the top-level fighters like Errol Spence Jr., Terence Crawford, and Yordenis Ugas.

Undisputed female welterweight champion Jessica McCaskill (11-2, 3 KOs) scored a seventh round knockout of Kandi Wyatt (10-4, 3 KO’s). The referee stopped the fight in the seventh round because Wyatt was taking too much oneway punishment from McCaskill.

Wyatt was getting hit with a lot of uppercuts and body shots from Wyatt, and it was too much in the end.

Heavyweight prospect Filip Hrgovic (14-0, 12 KOs) destroyed a game power puncher Emir Ahmatovic (10-1, 7 KOs) by a third round knockout in a scheduled 10 round bout.

The 2016 Olympic bronze medalist Hrgovic knocked Ahmatovic down three times in the contest before the bout was halted.

Hrgovic knocked Ahmatovic down twice in the second round with chopping right hands in round two.

In round three, Hrgovic knocked a tired and hurt Ahmatovic down with two big shots. The referee then stepped in and stopped the fight.

Despite the fight only lasting three rounds, it was surprisingly competitive and action-packed throughout with Ahmatovic landing some big shots on the chin and midsection of Hrgovic.

You got to give Hrgovic a lot of credit for taking some massive punches from Ahmatovic that would have knocked out a lot of fighters.

The 6’6″ Hrgovic is looking to get a title shot, but he’s going to have to go through a title eliminator first to earn the shot. He’s clearly too dangerous for any of the champions to give him a title shot in a voluntary defense.

Williams landed a scorching shot that stunned Cash in round two, and he then followed up with a barrage of heavy shots that had him in serious trouble. At that point, referee Raul Caiz Jr. stepped in and stopped the fight.

Unbeaten 19-year-old middleweight prospect Amari Jones (5-0, 5 KOs) stopped Timothy Lee (5-2, 4 KOs) in the sixth round after hurting him with a big shot.

Jones had Lee out on his feet after connecting with a big right hand to the head. At that point, he teed off on Lee until the referee stepped in and stopped the fight at 2:40 of the sixth. 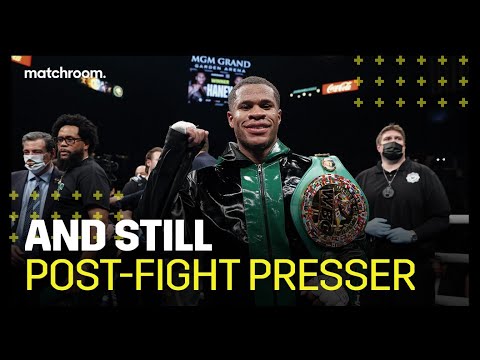 “I’m going to break him down physically and mentally the whole fight,” said Joseph Diaz Jr. to Fight Hub TV on his plans for victory over Haney.

“That’s what every fighter should be doing in calling themselves the best because if you don’t call yourself the best, why are you even competing?” said Jojo Diaz in reacting to Haney saying he’s the #1 lightweight in the division.

“He’s doing his job as a fighter calling himself the best because you have to have that confidence because going inside that ring, it’s a really, really dangerous sport where people can get hurt.

“You have to have that confidence because if you’re lacking any kind of self confidence, you’re already losing the fight. I don’t think it’s any extra motivation.

“I’m just going to go out and do my thing,” said Jojo when asked if he’s more motivated for this fight because of the possibility of being picked by undisputed lightweight champion George Kambosos Jr. to face him in Australia with all the titles on the line.

“Fireworks, fireworks,” said Jojo Diaz on a fight between him and Kambosos. “I think it would be an exciting fight for all the fight fans. He’s one hell of a fighter.

“I think it’s going to be a solid fight because he’s the type of guy that will keep on coming just like myself, so I think it’ll be a firework type of fight,” Jojo Diaz said of a match between him and George Kambosos Jr.

The underdog Jojo Diaz, 29, says he’s going to outwork the unbeaten 23-year-old Haney by averaging 120 punches thrown per round to overwhelm his defense.