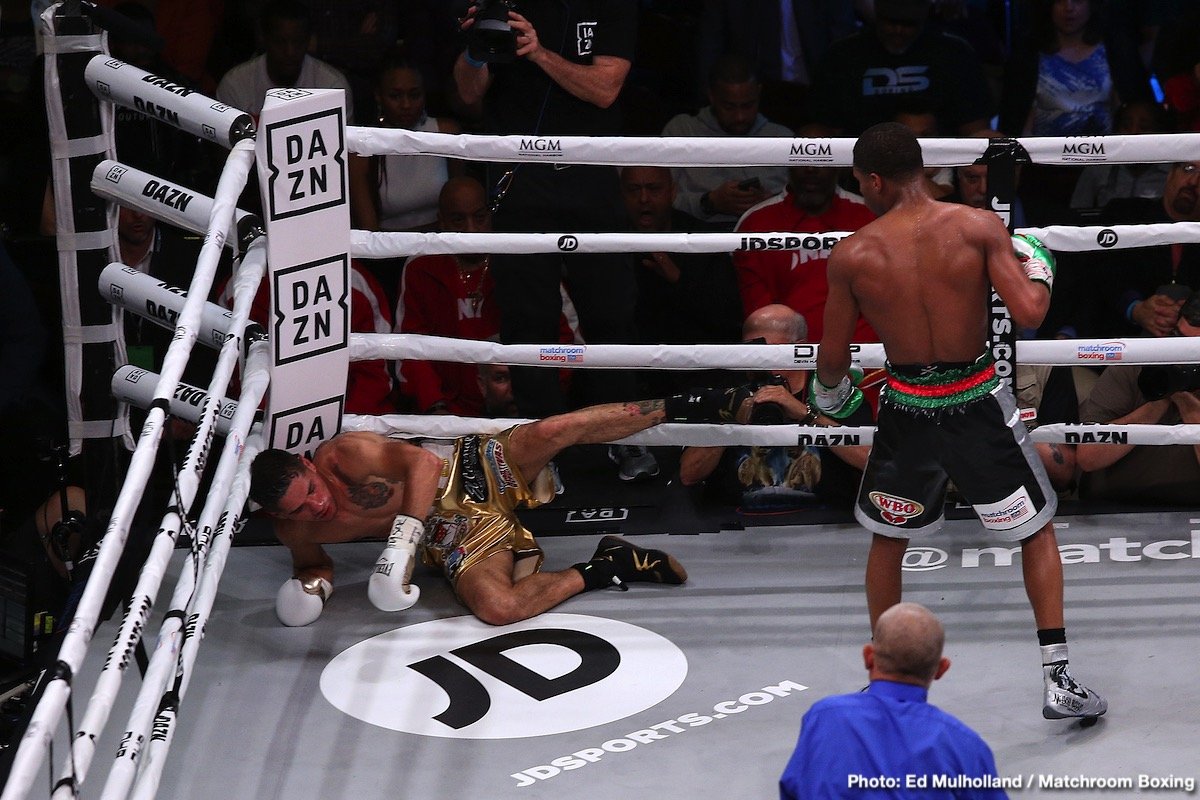 When Oleksandr Usyk bowed out the fight three weeks ago, it seemed this card was going to fade into mediocrity. However, with one glaring exception, no fight on this card was a bore, and headliner Devin “The Dream” Haney certainly took advantage his new headliner status to showcase his talents.

With only 13 knockouts in 21 fights coming into this fight, Devin Haney was hardly considered a power puncher. Nonetheless, he was favored as the technically superior fighter. And Haney seemed to be happy to be just that for the first four rounds, proving too quick and slick for opponent Antonio Moran to mount much of any offensive. Still, Haney didn’t rest on his laurels, as a perfectly timed right hook to Moran body sent him flying back into the ropes down to the canvas midway through the fifth. Haney went on the assault from then on, being relentless as he went for the knockout. Moran reeled and tried to survive, but it was only a matter of time.

The end came in the seventh, when a jab and another perfectly timed hook to the body set Moran up for what proved a highlight reel knockout. Moran fell hard from a thunderous right hook to the head as he stepped backward into the neutral corner. Referee Kenneth Chevalier immediately waved it off at 2:38 of the seventh. “A candidate for knockout of the year” was how announcer Michael Buffer described the finish, and no on the audience would have disagreed with that assessment. They were beside themselves with the spectacular finish they witnessed, as Haney put the entire lightweight division on notice with this electrifying win.

Now, Haney’s win was really the culmination was stellar night the fights at the MGM National Harbor in Oxon Hill, Maryland. Prior to that domination, a pair of heavyweights rounded out the co-main events. Coming into the ring to a mix of Darude’s “Sandstorm”, undefeated heavyweight Filip Hrgovic (8-0, 6 KOs) demolished Greg “Bad News” Corbin in 1:00 of the first round thanks to a thunderous right hook as Corbin was lunging in.

Before that, heavyweight Michael Hunter’s fight with Fabio Maldonado (26-2, 25 KOs) was a foregone conclusion. Having built his record on nobodies until getting dominated by Oscar Rivas, it didn’t surprise that Maldonado had no answer for Hunter’s speed or sharp left-right combos. Still, how Hunter took apart and destroyed Maldonado was a thing of beauty. Round 1 saw Hunter feeling Maldonado out making his opponent look stupid swinging for the air. Round 2 saw Maldonado get exposed hard, first taking a count from the ropes from a Hunter combo, then get knocked down on his face from a hook, and finally find his face smashed into Hunter’s corner post before Referee Harvey Dock called it off at 1:45.

The WBC/WBA super lightweight unification fight between Jessica McCaskill (7-2, 3 KOs) and Anahi Sanchez (19-4, 11 KOs) proved to be action-packed right out the gates. They charged each other from the opening bell and swung for the fences. During the first half of the fight, Sanchez had the edge on connects and the more telling shots. Round 5 was her most dominate round, as she seemed to be snapping back McCaskill’s head at will. Still, McCaskill would not relent and took over in the second half.

By the time eighth round was rung in, the tide had completely turned. McCaskill was now the one clubbing Sanchez good, giving her a bloody nose for her troubles. Round 9 was more of the same, although spoiled somewhat by McCaskill shoving Sanchez through the ropes during a heated exchange. The final round saw McCaskill unloading everything she had on Sanchez’s head. Sanchez was barely standing and swinging sloppily as the final bell rang. It was a very close fight, and Levi Martinez seemed spot-on with a 96-94 card in favor of McCaskill. But looking at Larry Hazzard and Rob McNair’s scorecards, 99-91 and 98-92, you would have thought it was a runaway for McCaskill. Even the new unified champ recognized this, and she lamented on how she hates seeing judges turn in scores like that.

Now, to the low point of the evening. 2016 Olympic gold medalist Daniyar Yelessinov (7-0, 3 KOs) won an unimpressive unanimous decision as he treated the fight more like an amateur bout than a pro fight. His opponent Luis Norambuena came to fight in his pro debut. Problem was that Yelessinov was too slick for him to land much of anything. His lunging shots mostly caught air. Sadly, for Yelessinov and the crowd, the amateur champ was too cautious to land much more for himself than probing jabs and the occasional combo. He did barely enough to earn the victory, and the crowd voiced their disapproval when the final bell rang.

Baltimore-native Lorenzo Simpson (4-0, 3 KOs) made short work of Rafael Garcia (9-3, 4 KOs) bludgeoning him with a barrage of punches for over twenty seconds until Garcia fell into the ropes and Referee Harvey Dock waved it off at 1:19 of the first round.

The opening (and non-televised) fight between Luis Perez Salas (10-2, 0 KOs) and local favorite Mack Allison IV (9-3-1, 7 KOs) proved an action-packed affair as the bad blood showed through at the end of the first round when Perez caught Allison with a hook after the bell. From the then, it was a war, but Perez was far more effective landing heavy shots to Allison’s head and body. The fight ended with all three judges seeing it 59-55 in Perez’s favor.

Overall, if you can for Deniyar Yelessinov’s pointless effort, this was nothing short of a great fight card. The fact that a television audience could see almost all of it thanks to a streaming service like DAZN was only a bonus to boxing fans the world over. As far as being their in person, it was a card that proved more than worth the price of admission.