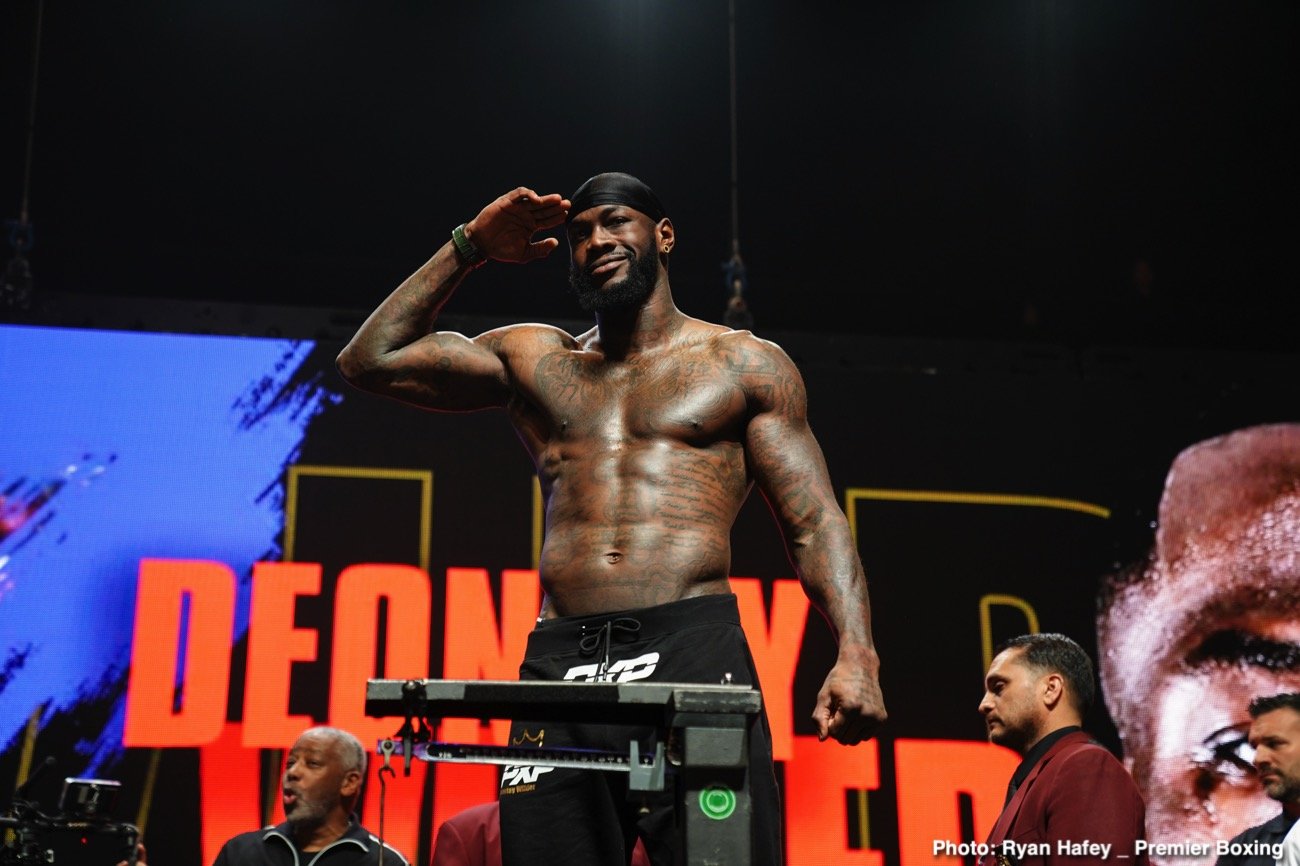 Former WBC heavyweight champion Deontay ‘Bronze Bomber’ Wilder has signed the contract for him to fight champion Tyson ‘Gypsy King’ Fury in an arbitrator-ordered trilogy match that will be taking place on July 24th in Las Vegas, Nevada.

The fight could wind up taking place at the Allegiant Stadium in Las Vegas. It’s unclear whether enough boxing fans will show up to sell out the 65,000 seat stadium, but it just might.

That’s where Fury’s promoter Bob Arum has been talking about wanting to place it.

Fury is en route to sign his portion of the contract to make the third fight with Wilder (42-1-1, 41 KOs). While this news may disappoint some boxing fans, who had hoped that a step aside deal would be worked out by Team Fury so that he could face Anthony Joshua on August 14th, that was never going to happen.

Fury (30-0-1, 21 KOs) and his promoters at Top Rank likely believe that beating the former WBC champion Wilder is a mere formality at this point, and it shouldn’t be a problem setting up the fight with Joshua for later this year.

That may indeed be the case, but I still don’t like to see all that time and effort put into making the Joshua-Fury fight thrown away like this.

The boxing world was looking forward to seeing Joshua and Fury battle it out for the undisputed heavyweight championship on August 14th in Jeddah, Saudi Arabia.

Instead, they have to settle for watching Fury fight a guy that he destroyed in seven rounds a year ago in February 2020.

Update: @BronzeBomber has signed to fight @Tyson_Fury on July 24. Fury on way to Vegas and will sign today or tomorrow #wilderfury3

Fury-Wilder 3 not a substitute for Joshua-Fury

“This is a very good heavyweight fight,” said Chris Mannix on the Fury vs. Wilder 3 clash. “If you were to make a list of the top fights you’d like to see in boxing, the third fight between Tyson Fury and Deontay Wilder would be on that list.

“But I think the Public was warming to the idea that the fans would get Anthony Joshua vs. Tyson Fury in a heavyweight unification fight no later than August 14th.

“So the promotion has an uphill climb to sell people on the relevance of this fight. Tyson Fury is going to find a way to sell this fight. I think the most interesting part of all this is Deontay Wilder.

“Deontay Wilder almost reminds me of Rocky Balboa after he lost to Clubber Lang. He just disappeared off the map for a while.

“He went back to the labs and started working with a new trainer. In Wilder’s case, it’s former heavyweight Malik Scott. Maybe he added something to his game,” said Mannix.

Fury vs. Wilder 3 would have been perfect if the second fight were a competitive one last year, but it wasn’t. It was a total mismatch with the 271-lb Fury using his 40-lb weight advantage to rough up and punish the 231-lb Wilder.

The third fight could be a little different, though, as Wilder is working on movement with his new trainer Malik Scott, and he’s not going to be a sitting duck like last time they fought.

If Fury is going to beat Wilder this time, he’ll need to hit a moving toward, and he won’t be able to trap him against the ropes and lean on him with all his weight like last time.

Wilder can’t fight off his back foot

“I don’t expect Deontay Wilder to all of a sudden become an expert boxer,” said Mannix. “He’s not going to be able to do that at this stage in his career.

“But I’m very interested to see if Wilder’s game plan changes, whether he’s able to adjust to the aggressiveness of Tyson Fury. Remember, Deontay Wilder, even though he’s coming off that loss, he still has that big right hand.

“We’ve seen countless times, especially at heavyweight, if you have big power, you have a chance. Go back to when George Foreman won his piece of the heavyweight title late in his career.

“He was losing to Michael Moorer, and then the last round came, and boom, Foreman hit Moorer with that big right hand.

“So Deontay, if nothing else, has a puncher’s chance. Heavyweights are attractions, and Deontay Wilder has been an attraction is because of that power.

“What he’s going to have to figure out that if Fury tries to fight him in the same way, and there’s no reason to believe that Fury won’t, how does he prevent himself from always fighting off his back foot?

“He is excellent as a forward-moving fighter when he can set up his big right hand. He doesn’t try to win fights by decision.

“He was losing to Luis Ortiz a couple of years ago by a shutout before he knocked Ortiz out in the middle rounds. But Ortiz didn’t put the pressure on Wilder that Fury is going to put on.

“Wilder is either going to have to match that pressure or figure out how he can generate the same power fighting off his back foot,” said Mannix.

In watching Wilder workout with Malik Scott, he’s not looking powerful with his punches when he’s throwing them on the move. There’s considerably less power on Wilder’s shots compared to when he’s coming forward and sitting down on his shots.

It won’t help Wilder if he’s unable to get enough power on his punches to hurt Fury because he’s still not likely to win a decision. Wilder isn’t going to outbox Fury. That’s just not going to happen.

If Wilder wants to win, he’s got to sit down on his shots and hit Fury with one of his right hands while he’s standing still or coming forward.