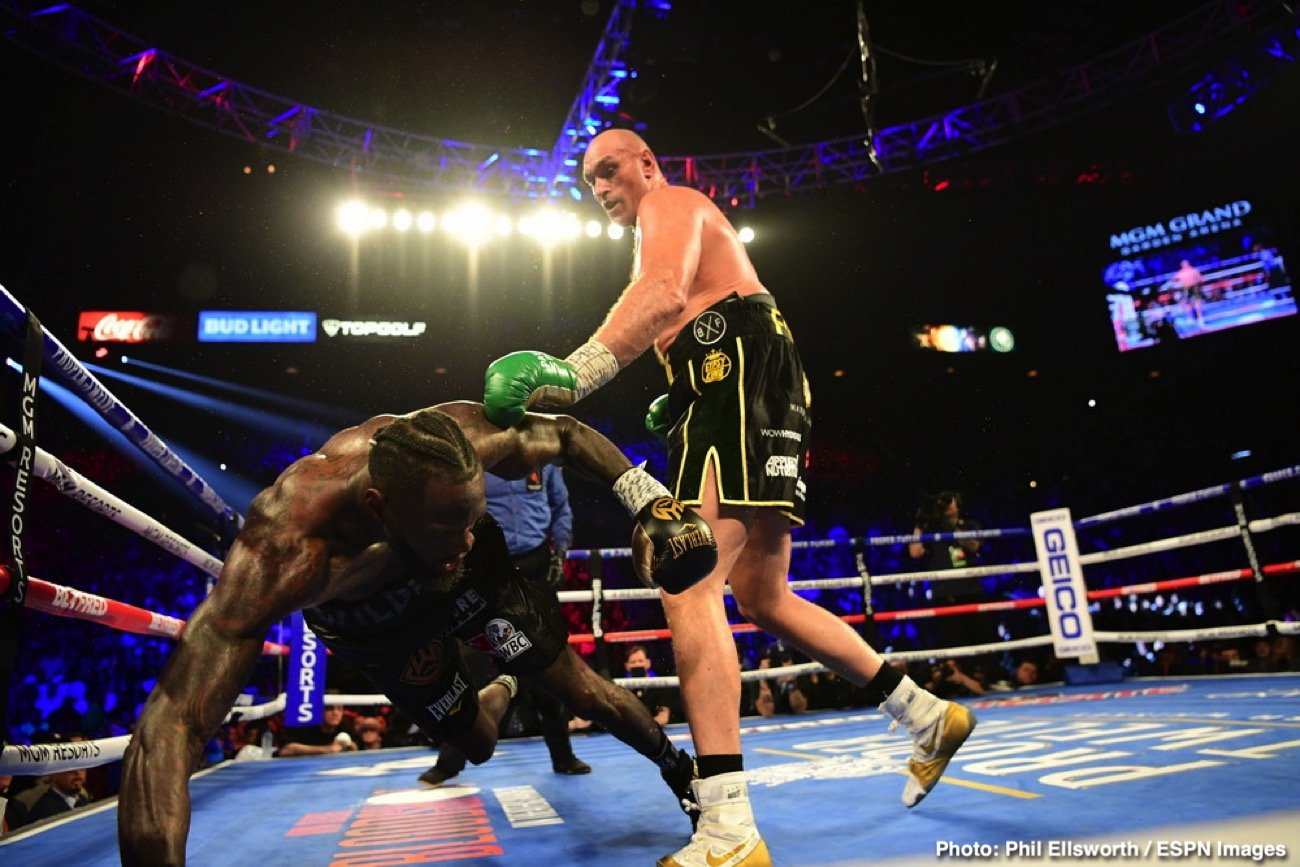 Deontay Wilder issued a statement on Friday making it known that he will be preparing for his third fight with Tyson Fury, and he’ll begin preparation soon to get ready for that important match-up. Wilder (42-1-1, 41 KOs) says the “WAR” with Fury has just begun, and he’ll be taking his title away from the big 6’9″ British fighter when they fight for a third time in the summer.

The way that Wilder is talking, he sounds like he’s going to be pure 100% trouble for Fury when they fight each other again. Wilder is talking like he wants to take Fury’s head off. If Fury is planning on standing in front of Wilder again for the third fight, he may live to regret it.

Wilder isn’t shying away from fighting Fury a third time despite suffering a 7th round knockout loss to him last Saturday night on February 22 in Las Vegas, Nevada.

Well, the good news is Wilder won’t be dumping his trainer Mark Breland from his team, who he was previously unhappy with after he threw in the towel in the 7th to save ‘The Bronze Bomber’ from taking needless punishment.

“Your king is here and we ain’t going nowhere because the war has just begun,” said Wilder on his Instagram site. “I will rise again. I am a KING. You can’t take my pride. I’m a warrior and a king that will never give up. I’m a king that will fight to the death.

We will rise again. We will regain the title, and I will be back. We will hold our heads up high, and we will rise like a phoenix from the ashes. I’ll see you in a few months for the war has just begun,” said Wilder.

Deontay’s decision to face Fury in an immediate rematch won’t be a popular one with fans, and especially Anthony Joshua’s promoter Eddie Hearn. He’s been talking 24/7 about wanting to match Joshua against Fury in a fight for the undisputed heavyweight championship this summer. Hearn was hoping that Deontay would agree to accept a step aside fee so that the bigger fight between AJ and Fury could take place.

Obviously, Hearn is looking at it in a self-serving way, wanting what’s best for Joshua and his promotional company. When Joshua got battered and beaten by Andy Ruiz Jr. last June, he was all in favor of immediate rematch. He probably realized that Joshua’s career would go down the drain unless he fought Ruiz Jr. immediately to avenge the loss.

Wilder is doing the same thing by executing the rematch clause to force a third fight with Fury. Again, it won’t be a popular decision with the fans and Hearn, but Wilder is looking out for his own self. He needs to avenge the loss to Fury to save his career.

“I’m a warrior. I feel the same way I felt on fight night. If I have to go out, I want to go out on my shield. But I understand that my corner and my team has my best interest at heart. Mark Breland is still a part of Team Wilder. Our team looks forward to preparing for the rematch.”