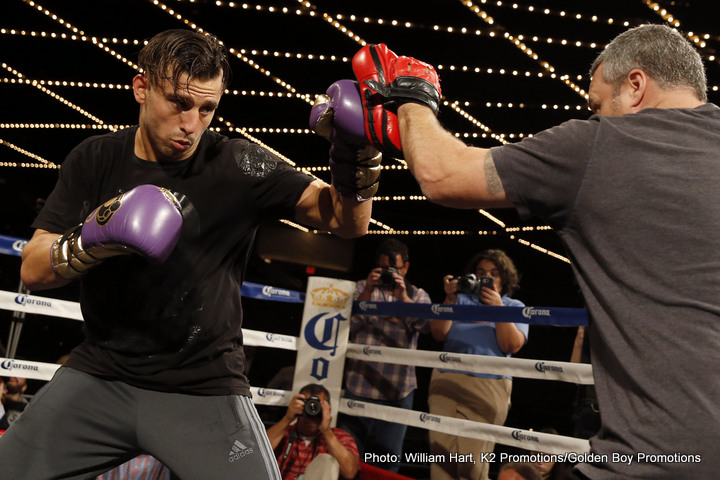 In a disappointing turn of events, middleweight star David Lemieux failed to make weight for tomorrow night’s fight against James De La Rosa. The fight, agreed for a catch-weight of 163-pounds, fell apart when Lemieux came in at a heavy 165.6-pounds – really nowhere close to the agreed poundage.

De La Rosa, no doubt disgusted, walked away and refused to negotiate any deal with Lemieux that would allow the fight to go ahead with Lemieux at the higher weight. De La Rosa made weight. Lemiuex was hoping to bounce back from his October defeat to Gennady Golovkin but now he faces an unknown immediate future.

The Lemieux-De La Rosa fight is not the only one that should be going ahead tomorrow in what would have been a potentially great night of boxing. Firstly, the Shawn Porter-Keith Thurman fight was postponed due to the car smash Thurman was involved in, then pound-for-pound star Guillermo Rigondeaux’s fight with Jazza Dickens was called off due to visa problems on the part of the gifted Cuban, and now this news regarding the Lemiuex fight.

Lemieux-De La Rosa probably will not be rescheduled, but the new date Showtime has released for the Porter-Thurman fight is June 25th. That is one great fight that is simply too good not to happen.

In other fight postponement/ fights scrapped news, it has been reported how the Zab Judah-Josh Torres card, also set for tomorrow night, is also off – due to something called “eligibility issues.” It seems Judah just cannot get a fight these days. Also off, or at least delayed, is WBC cruiserweight champion Grigory Drozd’s defence against Junior Makabu, which was set for April 8th in Moscow, Russia. This fight has been postponed due to injury on the part of the champion, who injured his left hand, presumably in sparring. This fight is likely to be rescheduled at a later date.

Let’s hope the Terry Flanagan-Derry Mathews lightweight clash, which has already been postponed once, goes ahead as planned tomorrow night in Liverpool!