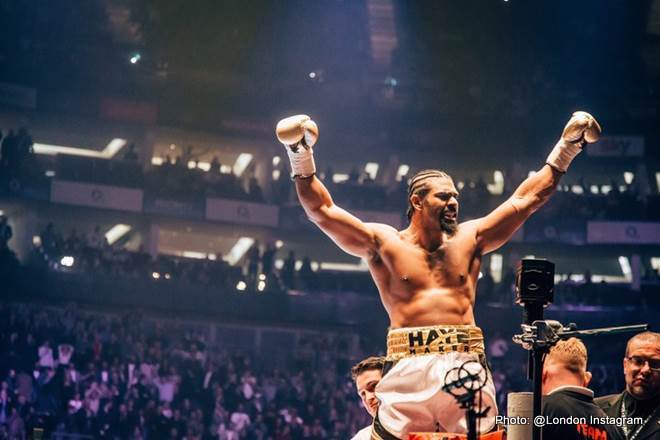 At The O2 Arena in London next month, an exhibition will open – until August – that will celebrate the legendary career of the one and only Muhammad Ali, “The Greatest.” And Ali himself, who has recently celebrated his 74th birthday, is expected to fly to the UK – perhaps for the very last time – to visit the tribute that is sure to be a massive hit with fight fans.

But London’s own David Haye wants the UK to go one step further, and recognize Ali with an honorary Knighthood. Haye has launched a petition, inviting people to sign it and, as he says, give the great man what he deserves.

“Like millions of others around the world, Muhammad Ali is a hero of mine and the inspiration that made me want to become a boxer,” Haye said. “This many well be The Greatest’s last visit to the UK and he deserves to be recognised formally, not only for his sporting achievements that made him one of the most recognisable people on the planet, but also his amazing humanitarian work over many years that have had an impact across the world. Muhammad loves the UK. He first came to prominence here when he Henry Cooper nearly 53 years ago and he’s entertained and enthralled us ever since. The Greatest has received many major awards and high honours worldwide and I believe it’s time the UK honoured him too. Please sign the petition to credit Muhammad Ali with the Honorary Knighthood he fully deserves.”

It is more than likely that many thousands of fans will do just as Haye implores and sign the petition (which can be found on-line at www.Change.org). Ali is certainly deserving of the honour. The great man did so much during his career, as a boxer and as a humanitarian, as Haye correctly points out.

How many current or former fighters, for just one example of Ali’s influence, would not have chosen the life they did if it had not been for Ali? Not too long ago, promoter Bob Arum went as far as to say Ali inspired, or paved the way, for the first black US President, Barack Obama. And it is not just in America that Ali made a massive impact.

As we prepare to welcome the most iconic, the most influential and the single most unique boxer of the 20th century to the UK, what better way to do it than to award him with this, the highest honour the UK can bestow on a man.

Just think for a minute, how different boxing – and the world, sporting and otherwise – would have been if the man born Cassius Clay had never existed.