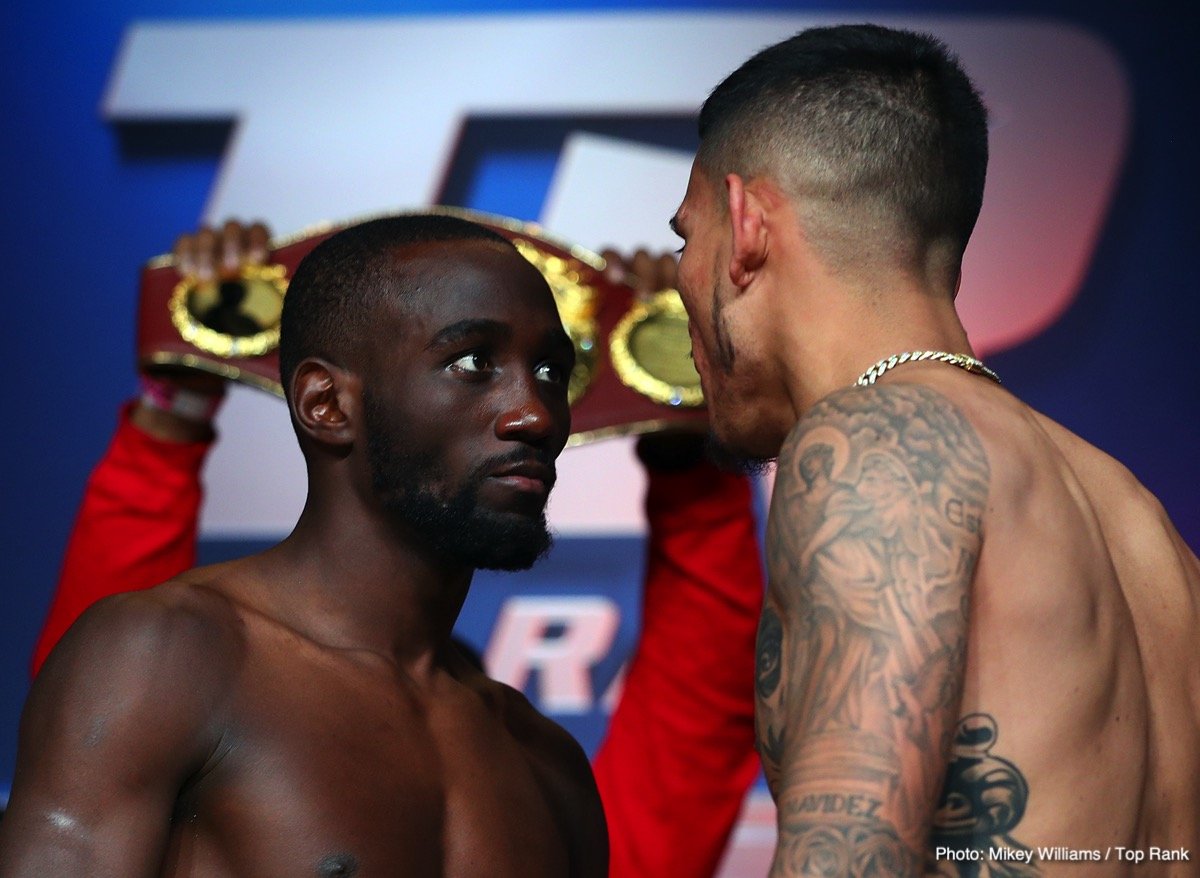 This Saturday night live on ESPN, Terrence Crawford and Jose Benavidez Jr. can solve an outside of the ring beef that’s been cooking to a fever pitch. The event location is a familiar one for Omaha, Nebraska native Terrence Crawford at the CHI Health Center. This matchup of undefeated fighters combining for 60 wins is deceiving on paper. Las Vegas has Crawford at +2500 making Benavidez around a 10-1 underdog. Regardless of the outcome let’s hope we get a good scrap for however long it lasts.

Most experts in the sport of boxing place Terrence ‘Bud’ Crawford in Top-3 pound for pound and many see him as the top dog. Crawford’s most entertaining and competitive fights were at the lightweight division. The fight that stands out most among Bud’s 33 victories is Yuriorkis Gamboa. A couple of past opponents had early success with Crawford come to mind, but none we’re able to sustain it past a round or two, except Gamboa. Crawford showed he could adjust to the quicker-handed Gamboa and before long it was curtains for the ‘Guantanamo Cyclone’.

Beyond a flush shot early in fights and the first round against Victor Postol, few fighters have been able to land clean punches on Crawford. Many fans want to see Crawford face the litany of PBC welterweights across the street. As we all know in the boxing world, unless you’ve been sleeping under a rock, Bob Arum and Al Haymon are separate entities both with plans already laid out for their guys. Hopefully Crawford, Spence, Porter, Thurman, or at least one of them, can raise their profile enough to force a super bout because the financial rewards can’t be ignored.

Considering Jose Benavidez Jr. is entering his 28th professional outing his resume is paper-thin including a questionable unanimous decision victory over Mauricio Herrera. Francisco Santana and a familiar foe in Jorge Paez Jr. isn’t exactly murders row. To be fair Crawford’s record may be full of more known fighters but leaves plenty to be desired when attempting to filter out the best in the world.

Any hype or traction from this promotion should be credited to the fighters for selling a beef. That’s not to say it’s a fake beef, as we’ve seen a several occasions the two engaging in verbal warfare in public. All beef aside, this fight lacks substance and Terrence Crawford will be subjected to criticism for not fighting an Al Haymon fighter no matter what the reason. Especially after extending his deal with Top Rank, Bob Arum will be seen as a protector to some fans and of course the fanboys. Even Crawford said it during fight week that he thinks, like everybody else, Benavidez doesn’t deserve a title shot at welterweight. Of course now-a-days we see lots of title bouts and mandatory challengers that have no business being ranked #1 contender.

The one thing Jose has in his corner is a 5-inch height and 3-inch reach advantage. If Jose can use a jab as a tool to keep Crawford from getting too comfortable, he could steal a round or two early. Movement along with the jab combined with reach is only way Benavidez, besides a KO, can win a few rounds let alone the fight.

Maybe with all the bad blood between these pugilists over the last chunk of months motivates Crawford to exchange. Maybe Crawford overextends himself offensively trying to close the gap on the taller Benavidez. Maybe just maybe, Crawford makes a critical mistake in route to pleasing the hometown fan base and ends up getting hurt not able to recover. And maybe the next time this want-to-be-scribe opens up his mailbox they’re will be a million buck inside.

We’re would are world be without dreams? The nightmare of reality can be vicious and frustrating. It does suck we won’t see Crawford taking on a top-5, 147-pounder anytime soon. Hopefully the powers that be find a way to make it happen. Until then media members and fans alike need to apply pressure through social media and with their pocketbooks.

We could get a good style-fight with Crawford mixing defense and offense. At the end of the night this Saturday look for Crawford to be too fast and way too skilled, winning via late-stoppage or unanimous decision.

My Official Prediction is Terrence Crawford by 10th round stoppage.

Side Note: The World Boxing Super Series retuns on DAZN this weekend headlined by Zolani TeTe vs. Mikhael Aloyan.

Ten Years Ago: When A Young Canelo Alvarez Scored A One-Punch KO Win Over The Iron-Chinned Carlos Baldomir
Follow @eastsideboxing