Terence Crawford (37-0, 28 KOs) took advantage of a zombie-like, weight-drained Kell Brook (39-3, 27 KO) in scoring a fourth-round knockout in a fight that ended too soon on Saturday night in ‘The Bubble’ at the MGM Grand in Las Vegas, Nevada.

Brook was getting the better of Crawford through three rounds, but then tragedy struck in the fourth with Terence hurting him with a shot. Brook fell up against the ropes, which held him up. The fight was over moments later with Crawford battering the empty husk of a one-talented fighter.

Crawford’s win allowed him to hold onto his WBO welterweight title and move on potentially to face either Manny Pacquiao or Errol Spence Jr.

The weird thing is, Crawford didn’t look that good tonight. He looked average, but he was still able to destroy Brook in the fourth round after hurting him with a nice left hand.

It was nothing special, but Brook’s punch resistance may have been impacted by the huge amount of weight that he took off to get down to the 147–pound limit for the weigh-in last Friday.

Tonight, Brook like he’d rehydrated to super middleweight. He had to have been close to 170 lbs inside the ring. He was huge, slow and his face looked weathered and worn from the ordeal of taking the weight off.

I hate to say it but this was clearly another cherry-pick with Top Rank finding a vulnerable fighter to put in with Crawford. Instead of the fight showing how great Crawford is. It showed that Brook is way, way over-the-hill, and he needs to retire already because he’s got nothing left.

This is what I was afraid of. Using an old junior middleweight as Crawford’s opponent had trouble written all over it the moment this fight was made. Brook looked depleted making weight for his fights at 154 in the last two years. 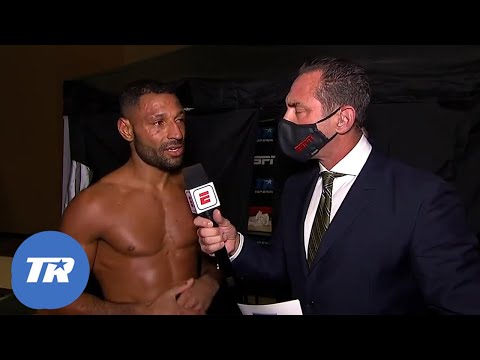 Asking him to come down to 147 to fight Crawford was never going to work. Well, it worked for Crawford to make him look better than he is. This was a showcase fight with Crawford matched against an old guy that had no business fighting at 147.

It’s too bad Top Rank didn’t find a quality opponent for Crawford to fight because Shawn Porter, Yordenis Ugas, and Keith Thurman all had expressed interest in wanting to fight Bud.

Instead of using one of those guys, Top Rank picked the shot-looking Brook and had him come down from 154 to take the fight at 147. If they wanted to be fair, they should have had Crawford fight Brook at 154, because at least he’d have had a fighting chance.

I think I speak for a lot of people when I say that Brook needs to retire pronto. The man has nothing left at this point. He was nothing like the guy that has given Spence and Gennady Golovkin problems many moons ago. That version of Brook gone forever.